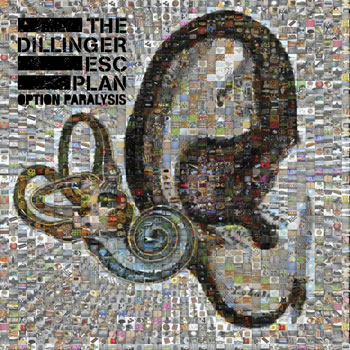 It's been a long and twisted road since "Calculating Infinity," hasn't it?

"Option Paralysis," the newly released work from mathcore veterans and acquired taste The Dillinger Escape Plan, is an attempt to get back some of what the band has lost over time.

The interesting thing with DEP is that any listener has to be in the proper frame of mind to evaluate it with any credence. Sure, "Option Paralysis" is another hammering, percussive hardcore fest, but to truly appreciate what the band is trying to craft, it has to be viewed outside of that narrow lens. The kind of music that the band is trying to project could just as easily be dissected and examined in a scholastic fashion by any number of music theory classes.

Just as with all DEP albums, "Option Paralysis" exists on two clearly defined and very different strata. On its face, the album is brash, unpolished and filled end to end with a relentless and arhythmic auditory assault. On the other hand, all of that seemingly unconnected and disjointed noise is usually part of a larger musical phrase or idea. In that regard, "Option Paralysis" succeeds greatly, since if you can sift through the distortion, the almost jazz-style twisting and orchestrated times signatures are quite artistic. That even includes what at first blush is an ear-splitting punk fuzz-out like "Farewell, Mona Lisa."

I'm not much of a math rock/math metal/mathcore guy, but there's a lot about "Option Paralysis" I can appreciate. I enjoy the intricate phrases and the band's ability to tie different time signatures together to create an auditory experience. I really like how DEP did not constrain any single song to a single thematic element. Rather than having "slow songs" and "fast songs," DEP has both in once, be it a ripping-to-serene "Endless Endings," or a song like "Room Full of Eyes," which contains multiple parts and signatures in a single piece.

That said, one of the album's faults (particularly for a listener like myself,) is that it fails to create any kind of accessible identity. Maybe after all this time my memory is a little foggy, but it feels like "Calculating Infinity," while still maintaining its un-apologetically complicated and dense construction, did a better job of still appealing to the masses on a more recognizable level. The new album has virtually zero foot-stomping, fist-pounding two-beat mayhem, which is a credit to the band's overall musicianship, but makes the listening less emotional and more academic.

In addition to that, all the usual volume and nastiness that we've come to expect from Dillinger Escape Plan is still intact, but it feels slightly hollow. After eleven years, "Option Paralysis" doesn't seem to carry the same sense of urgency as the band's classic efforts. Some of the venom and indignation is gone, even with song titles like "Gold Teeth on a Bum."

In the end, I like "Option Paralysis" on a theoretical level, but I don't know that I'd ever reach for it to listen to for anything other than musical study. I've often wondered how many of DEP's fans enjoy the music because of its intricacy, as opposed to how many just enjoy the unfiltered, raucous noise. I don't know that this album lives up to the more memorable early and Mike Patton-based works of Dillinger Escape Plan, but it's streaming on their myspace page, so give it a shot if you think you might be interested.