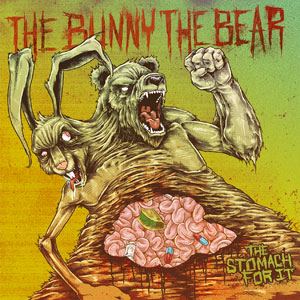 Album Review: The Bunny the Bear - "The Stomach For It"

The Bunny the Bear is a post-hardcore band that some have said incorporates dance elements into their music to flesh out their sound. More than that, the band is equal parts musical and theatrical experiment, attempting to push both the envelope of the hardcore sound and the envelope of presentation. This is one of those situations where fans will stand by and argue that detractors simply don't understand the fusion and exploration that's going on, and that might be true; but it also makes the bold assumption that the fusion and exploration is worth getting. Let that set the stage for our journey through "The Stomach For It."

This new effort from the masked madmen behind the band is more mature and well-developed than their previous full length "If You Don't Have Anything Nice to Say." It features some admirable blending of what we commonly think of as hardcore sounding guitar and lighter (much lighter) elements that normally can't be paired in the same song, much less at the same time. Listen to "This Isn't Why You Made Her" to hear a truly unique layering mechanism that puts wholly disparate ideas on the same level. If the whole album were comprised of that dynamic, it could be appreciated on a solely academic level.

"All Birds" is an expansive, all-encompassing piece that balances all the bands' elements in a creative and hook-laden affair. The chorus is infectious and sticky; you may find yourself humming or singing it to yourself in quiet moments when you least expect it. By comparison to other acts and sounds in the genre, "All Birds" is a melodic and impressively atmospheric affair. When the band focuses on creating a sonic balance on "The Stomach For It," they do some nice things.

Unfortunately, this album still feels raw, and not in a good way. The band wants you to focus almost solely on the juxtaposition of vocalists Matthew Tybor and Chris Hutka, at the expense of the instruments behind them. The mix is vocal-tilted and uneven, burying the harder-core elements behind the forefront layers of singing and yelling. While the album is overall less aggressive and it's worthwhile for the band to explore that part of their talent, the equalizing continues to insist on the brashest parts. "Lonely, Lonely, Lonely" might be a nice piece, but who could tell beneath the assault of vocals?

To that end, the flick-of-the-switch changes between Tybor and Hutka are jarring, and the gimmick becomes tiring by the middle of the album. The mixed vocal stylings that have been so capably blended by many bands in more European styles of metal is juggled haphazardly here, the resultant product being unfortunately reminiscent of the later age of rap and nu metal trying to integrate hip hop into their music. It's worth noting that those bands killed the musical form through bungled mishandling, and it has yet to recover.

This is where the theatrical element tries to color the music, and it fails to register. The "look at me, I'm wearing a mask and making a statement about things" pastiche of "The Stomach For It" doesn't resonate in a meaningful way, even less so for people who are past college graduation age and don't quite have the time for it, or simply aren't as impressionable as they used to be. The fact that "The Stomach For It" is a manner of concept album makes the dramatics more prevalent and concurrently more flat.

The middle of the album falls particularly prey to this decision, with "Soul" and "Breeze" bordering on aural disaster. Each song is an absolute mess, as it can't decide which half, scream-y or sing-y, it wants to be. The twin vocals walk on each other clumsily, while the instruments behind are muted and supplanted by the focus on oral utterances. It is in these moments where the listener may have an out of body moment where he/she steps back and says "Wait, what am I supposed to be getting here? What is this? What is its appeal?"

If you're part of the ear gauges and spin-kick crowd, "The Stomach For It" may hold some appeal, but even at that it is a scattershot affair that strains to reach the lofty level it aspires to. Even with that, the conscious shift toward more inclusive and melodic rhythms may turn off some fans of The Bunny The Bear's previous efforts. From a creativity standpoint, this is a step forward for The Bunny The Bear, but in terms of listenablity, enjoyability and accessibility, you may be best advised to pass. One can only hope that the band has learned what they wanted to learn from this album and can apply the good parts to a future endeavor.