You know what? I can get behind this.

Four or five years ago, I likely wouldn’t have cared for this album. I’m sure that I would have recoiled at enjoying an album that has this much mainstream appeal, and I certainly would have bristled at the idea of music that practically borders on hair metal revival.

Yet, in the midst of what seems to be an interminable period of mainstream metal that’s turned to doughy, emotional rock, “Time to Burn” is a nice, bombastic party rock album to have in your back pocket.

In the wake of the recent death of the Scorpions (of all the hair band souls I have encountered, there’s was the most...metal *cue bagpipes*) it seems karma has conspired to leave Taking Dawn in their place. I’m sure the band might not appreciate being pigeon-holed into that very defined scope, but that’s my honest impression.

Normally, I try to avoid hair metal at all costs, but in this instance, Taking Dawn has delivered an album that resurrects some of hair metal’s better qualities (gang choruses, sing along anthems, infectious riffs,) and leaves behind most of its worst (overwrought ballads, terrible wardrobes, Bret Michaels, and well, the hair.)

I know that the band and their various promoters want you to believe that Taking Dawn’s two signature singles are “Time to Burn” and “Take Me Away.” Both are good songs, but I’ll get to that in a minute.

Skip ahead all the way through most of the album until you reach the song that made me take a chance on this album in the first place: “Fight ‘Em With Your Rock.” This smacked so obviously of Dio (and the aforementioned Scorpions) that I had to hear what it was all about. There’s something about this song. It makes me laugh, as it is the perfect combination of “Blind in Texas” and “Kickstart My Heart.” I couldn’t help but grin widely as the band started what I’m sure live would be a fist pumping refrain of “Rock! Rock! Rock!” over and over again. There’s something about a gimmick like that doesn’t get old. Over the top? Sure. Problem? I don’t think so. 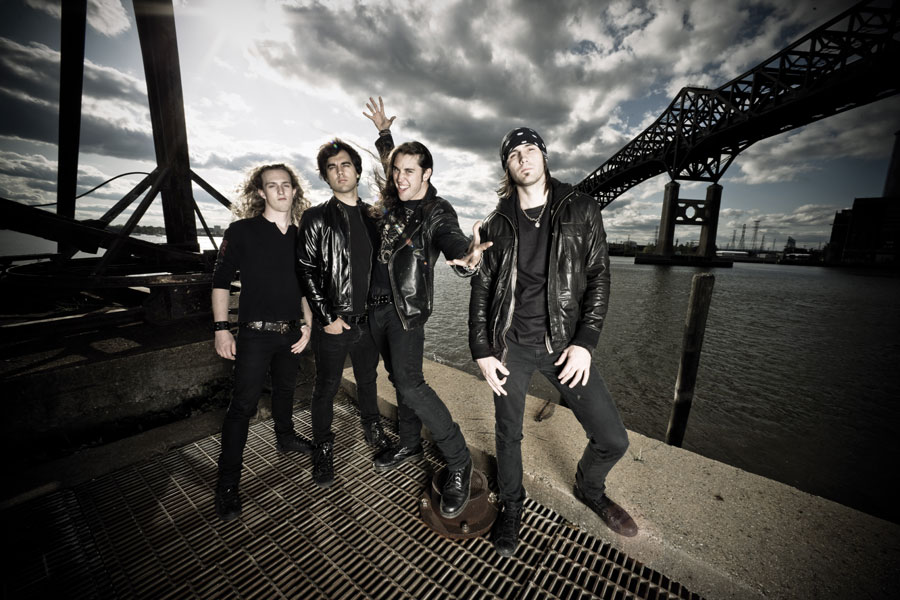 What serves to separate Taking Dawn from what could have simply been a horrid experiment in hair revival is the edge they bring to the table. The album is an unapologetic celebration of the classic rock and roll sensibility. It’s not exactly taking risks, but “Time to Burn” does have a certain inherit brashness, which puts more distance between the band and the infectious problem in modern radio metal of appealing to the lowest common denominator (see: Nickelback, Theory of a Deadman.) There’s more going on here than simply lamenting frustrations with women and drinking oneself into a stupor, no matter how bombastic or tongue in cheek the music might seem.

The actual single “Time to Burn” has a very mainstream sound, but also comes equipped with a machine gun guitar riff sure to at least catch the ear. “Take Me Away,” the other single, isn’t as harsh, but has a solid construction built on a foundation of crunchy guitars and pounding but accessible drums. The chorus comes dangerously close to being silly, but artfully avoids that line. This allows the album as a whole to maintain some credible, if perhaps not razor-sharp, metal chops. The entire album is one fun loving, fist pumping, sing along after another, complete with screaming guitar solos, arcing, high-pitched notes carrying over from chorus to verse, and a genuine sense of who-gives-a-shit.

The album isn’t perfect, as the Vegas quartet occasionally gets caught up in themselves and produces a somewhat generic effort like “Godless” or “Save Me” (notice the equally generic song titles.) In these tracks, the shouted gang choruses and general bravado help break up the monotony, and make the songs much more interesting than they would other wise be, but can’t completely save them.

“So Loud” is a good enough song, but reminds me of those overbearing rock songs that are used in the opening credits of anime shows. There’s a small part of me that likes to think the repeated chorus of “Endlessly” is “Scream like ice cream,” instead of “Scream like I scream,” but I doubt that’s the case. The entire album is riddled with profanity, which isn’t really good or bad, but it’s worth noting as a possible indication that the band may struggle with writing lyrics. Oh, and there’s a Fleetwood Mac cover…

Come into this album with the right frame of mind, and there’s a lot to like. I would hesitate to call Taking Dawn straight up heavy metal, but there’s an abundance of metallic influences on what they’ve produced. If you’re age appropriate, put on your nostalgia caps. If not, be ready to celebrate metal’s vast excesses, but in a good way. Give it a shot.