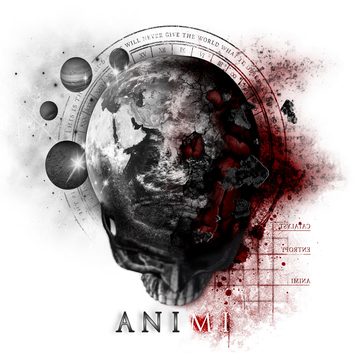 Metal has evolved in too many directions to count, but a hallmark of many of its offshoots is an increased propensity for technical virtuosity. In every sub-genre, as time goes on, there has been a focus on heightening the difficulty of the music, because there is a misguided belief (that I'm assuming was propelled by Guitar Hero) that the amount of finger-twisting riffs in a song has an impact on the quality of the music. I can't recall how often I've heard people who are fans of technical music criticizing other music for the basic fact that it wasn't hard to play. Not only is that attitude wrong for basic reasons of common sense, but it has made it difficult for me to embrace technical metal for fear of falling into a similar trap. Technical metal is often so focused on difficulty that it comes at the expense of songwriting; so much time was spent learning how to play that they never learned what they play is more important.

“Born Of The Sun” opens the album with another of my pet-peeves; a syncopated riff that is essentially one note, but played in an odd time signature, which is somehow therefore supposed to fall under the category of 'technical'. The verses are simple grunts over the top of that unchanging riff, leading into the obligatory clean chorus. It's played with mechanical precision, but there isn't much interesting about a robot playing music, unless it's actually a robot doing it.

“Catalyst” immediately follows in the same spirit, but with fewer clean vocals to break up the monotony. Erstwhile frontman Jay Shields is simple not an engaging enough performer to be given so much of the spotlight. As a growler, he is perfectly competent, although his range is quite limited. The problem is that the writing is weak, his vocal lines reduced to uninteresting patterns of rhythms, feeling more like a place-holder than an integral part of the music. Maybe there's some interesting math regarding the cadence he's using when put against the rhythms of the riffs, but if a layperson such as myself can't hear it, then it's pointless.

The nadir of the record is “Revelation”, which turns on a riff that is so stilted and skittish that it makes my brain hurt. Rather than pumping an interesting rhythm, it sounds like my player is skipping, they parts of the song are missing. I'm afraid that if I listened to the song more than once, it would be the same as putting a photo-sensitive person in front of a strobe light; inducing a seizure.

As the record moves along, it begins to meld together into one long slog of music, with riffs that all work on the same palm muted notes, just in different combinations of downstrokes, and vocals that don't add much to the mix. It's the lack of songwriting that makes the album feel so long. This particular style of riffing isn't something I normally like to listen to, but I've heard it used to write great songs before. But like so many of the bands that use this tech (more accurately; djent) style, the vocals never offer anything close to a solid enough hook to balance the equation. The whole of the record is made for guitar players, and even being one myself, it's not that interesting.

Both in the guitars and vocals, “Animi” doesn't have enough melodies to make the music interesting enough to listen to. It's an entire album of nothing but rhythm, which in a way makes it the metal equivalent of computer-based pop music. Sure, the playing is impressively tight, but I don't listen to music to hear an inhuman amount of skill in hitting notes in perfect time. I listen to music to hear moving songs, and “Animi” just doesn't deliver them.