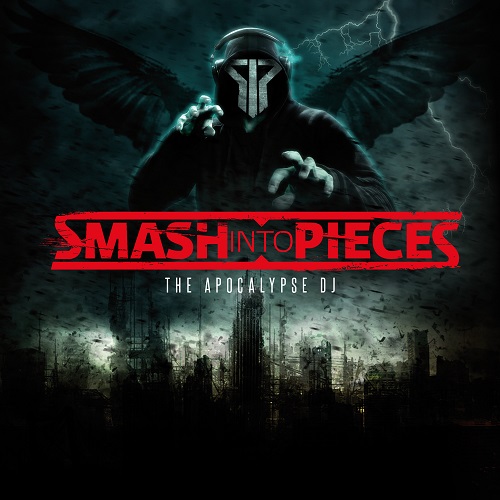 Are we forever doomed to repeat the history of popular music cycles?  It’s the logical question that one can ask when listening to “The Apocalypse DJ,” the new record from Swedish rockers Smash Into Pieces.

Let’s not kid ourselves – rock and metal and alternative rock have always had a place for the basic boilerplate blueprint that has catapulted a thousand bands across five decades to superstardom.  Furthermore, those genres will always have a place for that template, because frankly, it works.  It gets people interested, the common rock fan gravitates to it and it sells records by the truckload.

What makes the application of those basic mores worthy of investigation in the case of Smash Into Pieces is that for the first time in recent memory, we see alternative rock/metal through the lens of a Swedish rock band.  It’s vocals, guitar, drums and bass from a whole new continent, reflective both of a world marketplace for music and an attempted injection of life into a once proud genre that was singularly annihilated by that most hated of names, Nickelback.

Anecdotally, I had a professor in college who used to teach in and travel through the European low countries and Germany every summer.  He was thoroughly mystified by the preferences of the local bar patrons, who were willing to pay roughly six US dollars a bottle for Budweiser.  Why, he questioned, in these birthplaces of beercraft, where every meal had its own signature brew to go with it, would these men and women pay through the nose for dishwater?

You probably see what I’m getting at.

How is it that a band hailing from a country with such rich history in rock and metal would be tempted to produce music that peaked a decade ago and positively screams ‘North American rock hubris?’  What’s strange is that the members of Smash Into Pieces are clearly talented – there’s rich melody to be had on singles like “My Cocaine” and the easy hooks of “Stronger” or “Another Day on the Battlefield.”  The band never pushes the envelope though, almost like they might be trying to turn “The Apocalypse DJ” into a personal test – can they succeed at this style and this style alone?

Jaded listeners will recall that brief period in alternative music when every singer needed to sound like a combination of Eddie Vedder, Scott Stapp and Chad Kroeger.  Those same listeners might be immediately turned off by the vocal performance of Chris Adam Hedman Sörbye, who sings well enough within his own range, but lacks distinction.

It seems curious that a record entitled “The Apocalypse DJ” would have no discernable electronic influence.  That’s not good or bad, but it is confusing as hell.  There are a handful of cuts with some curious techno window dressing, “My Cocaine” being among them along with “Bullets,” but the added flourish doesn’t add any particular substance to the meal.  In trade the band offers several sanguine piano intros which are pleasant enough, but don’t fit the bill of the title.

At the risk of talking in circles, the bottom line of “The Apocalypse DJ” is that it’s frustrating because this band is clearly better than this.  This is only the band’s second full length record so the hourglass is hardly out of sand, but some urgency would probably help Smash Into Pieces be the band they’re eminently capable of being.