At this point, I had no idea what to expect from Rob Zombie. “Hellbilly Deluxe” and “Sinister Urge” were both modern masterpieces, and then “Educated Horses” was a confusing, muddled mess of an album. After a few years away directing movies, out comes “Hellbilly Deluxe 2,” finally debuting after two lengthy delays from the time of recording in 2008.

This new album is several magnitudes of order better than “Educated Horses.” I’m not exactly going out on a limb by saying that, but there it is.

The album’s not perfect, but it is a refreshing breath from Zombie. “Jesus Frankenstein” is a thundering open to the album, and has a good deal of promise, even though it never flows as easily as “Superbeast” or “Demon Speeding” did at the beginning of previous albums. The insistence on an acoustic guitar between verses breaks up the song in an unnatural way, but the album is off to a good enough start.

The next two are not as engaging, as “Sick Bubble-Gum” is repetitive and feels forced. The album’s single is “What?” which I must admit I find addicting, even if it does sound like a metal cover of some long forgotten ? and the Mysterians song.

There are moments when Zombie channels the Zombie of old, and reaches way back into his bag of tricks to grab a dirge like the very deep, very ugly “Virgin Witch,” or the slightly more stylized “Burn.” The latter is subsequently eyebrow-raising in that it seems Rob steals the chorus from the last half of The Trashmen’s 1963 super-classic “Surfin’ Bird.” No, I’m not joking. 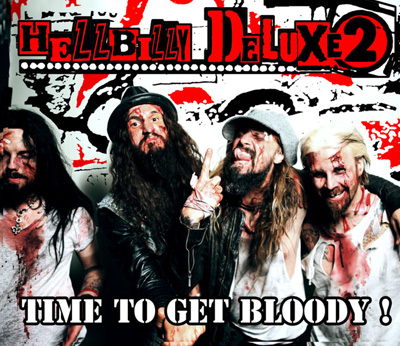 The back half of the album is stronger than the first, as Zombie returns closer to his musical roots. It’s almost as if he got done with all the gimmicks he wanted to do on the album, and then having nothing else to write, returned to form. “Cease to Exist” is a much more typically macabre song that Zombie aficionados will instantly be in tune with. Immediately following that is the song you all knew was coming, which is “Werewolf Women of the SS.” You just knew Zombie couldn’t leave that project alone, and would cram it into as many things as he could. The song is another fast-paced channeling of the Ramones, and is again more in the spirit of the original “Hellbilly Deluxe” (or at least “Sinister Urge.”) Oddly enough, as much as “Werewolf Women of the SS” is another self-service piece for Zombie, it’s also where the music is most comfortable, as it’s tight and never forced or loaded with inane nonsense.

The album’s closer is “The Man Who Laughs.” This single song serves as a brief telling of Rob Zombie’s entire musical career. The song wants to be, and nearly is, the gem of the entire album. If the listener were on the fence about “Hellbilly Deluxe 2,” this musical parting shot would have made you walk away happy. It’s edgy, filled with Zombie’s trademark high-ceilinged production, accompanied by an orchestral score, perfect for mosh pits….but. In a decision I will never understand, and makes me want to pull my hair out in frustration, Zombie decided to break the song up with a drum solo. It’s three minutes long. Truthfully, there’s nothing special about it. It puts a huge scar down the middle of an otherwise perfect piece. How fitting that Zombie’s tinkering would have adverse effects no matter what medium he’s working in.

Rob Zombie and his “classic” band (Tempesta, Riggs, Blasko,) sorely miss each other. The latter three, now known as “Scum of the Earth,” haven’t been able to equal the success of their former career, either in terms of quality or sales. Zombie and Scum of the Earth have become like Soulfly and Sepultura, or split halves of the Sword of Grayskull. They’re simply not as powerful apart. Even if Tempestra, Riggs and Blasko did not help record all parts of “Hellbilly Deluxe” or “Sinister Urge” the change in Zombie’s musical style since their departure is undebatable. John 5 is a very talented player, but lacks the same true grit as his predecessor.

That said, I’m comfortable saying that I like “Hellbilly Deluxe 2.” I’m not in love with it, but I like it. For all its faults, the album is much more in line with what I have come to hope for from Rob Zombie. It doesn’t give “Hellbilly Deluxe” or “Sinister Urge” a run for their money, but it does deserve a place on the shelf.