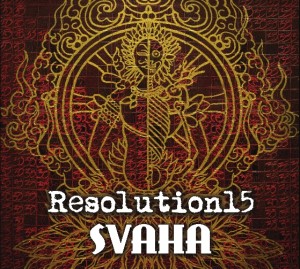 It’s easy to say that “Resolution 15” is a thrash band, but it’s harder to pinpoint the “how” of it all. While the band’s roots are firmly planted in the rich earth of thrash as we know it, the inclusion of electric violins in place of the traditional guitar immediately make their music an eyebrow-arching concern.

Yet, the mere inclusion of what could be seen as gimmickry does not an album make, so for “Svaha” to impress, it must bring more to the table than a banner headline about instrumentation.

For starters, what’s so instantly intriguing about “Svaha” is that it is an album that is not afraid to “go there.” Now, I realize that “going there” is a terribly dated and overused cliché, but for the purposes of this album it remains a valid point, simply because the definition of “there” is so obscured. There is an inherent D.I.Y attitude pulsing through “Svaha” that guides the band to innovative and sparsely-populated corners of the genres we commonly know as “thrash” “hardcore” and “heavy metal.” If the musicians choose to explore a less-traveled path, there is no major label or overbearing producer presence who implores them not to take that road.

Hence, the listener is presented with a song like “Anjaneya,” a scattershot, loosely connected experiment of a song with an impressive drum cadence, some staccato violin overdrive (words I never though I put in conjunction,) and a heartfelt, dry-lung vocal performance. This all sounds pretty stock-in-trade for metal until you actually hear the song, and realize that none of these elements mesh together in a smooth cohesion. The placement of every element in the song is a little off, but not in a bad way, merely a free-form one. If it could be said that there is an intersection between thrash and modern jazz, Resolution 15 might be the closest band to it.

This all comes to the fore during the band’s heady cover of U2’s “Sunday Bloody Sunday,” a song that is almost completely unrecognizable as performed by Resolution 15. With the exception of the choral melody and the lyrics, almost every facet of the song has been twisted, turned or otherwise convoluted to the fit the enigmatic musical idiom of the band performing the cover. If the hallmark of a great cover is that the band has put its own stamp on the original piece, then “Sunday Bloody Sunday” is a smashing success.

There are very moments of refreshing familiarity to be had on “Svaha,” but they come in the form of “Yama” and “Mr. Dark,” two songs back-to-back that are written with mosh pits in mind, each equipped with a different form of the old neighborhood gallop riff and designed to keep the people moving. In an album that challenges the musical intellect with the juxtaposition of harsh thrash and classically-influenced cadences, it’s not all bad to be given eight minutes of something simpler and less taxing.

Speaking of, for those who think they prefer their hardcore or metal in easily digestible capsules, this is not for you. While it’s easy to applaud “Svaha” from a journalistic or academic perspective, this is in no way an album you’d pull off the shelf every day, whether for a date, party, or listen on the way to work. Outside of a musical laboratory, “Svaha” can be extremely corrosive and hard to take in large doses, as the equally harsh sounds of violin, percussion and vocal often don’t, and indeed aren’t meant to, play nice with each other. I can’t knock the album for that fact, especially when it’s clearly part of the artists’ intent, but it certainly makes Resolution 15 a tougher sell.

“Svaha” is a pretty quick romp, but I would much rather an album that’s this far outside the margins be a little short than a little long, and kill the basic idea with unnecessary filler. Resolution 15’s album hits hard and fast and escapes. If you’re looking to start your year off with something completely different, and I mean completely different, try out Resolution 15. It’s not for everyone, but the musicianship is pretty solid and the paradigm is very unique.