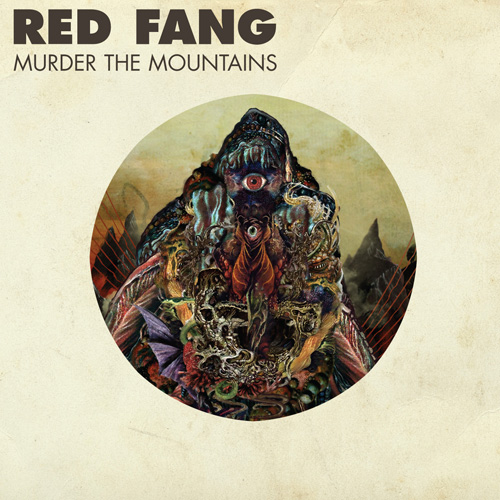 Red Fang’s sophomore effort “Murder the Mountains” is a wonderfully experimental, anything-goes affair that approaches the mores of kick-ass rock and roll with open eyes and robust vitality.

A product of musically oft-overlooked Portland, Oregon, Red Fang inked a deal with reprise Records, and was immediately paired with known producer Chris Funk. Funk’s previous experience with the Decemberists raises some eyebrows, but his steady hand makes a difference on the overall consistency of “Murder the Mountains” without changing the music’s intent.

On this new album, Red Fang comes across as a crushing, dry-throated who rightfully emphasized style over substance. Musically, “Murder the Mountains” lies at the crossroads of what feels like a dozen different bands: Priestess, Clutch, Devil to Pay, Scissorfight, Danzig, Screaming Trees and more. All that said, what becomes crystal clear as the album and Red Fang’s personality unfolds is that the band isn’t trying to sound like any of those acts. They are simply playing whatever comes to mind and concentrating their effort on delivering the punchiest product they can.

I will say that this album takes at least two listens to appreciate. The first pass can get lost in the chuggy, drop-tuned morass of the band’s sound. The second time through, as a listener you can’t help but pick up on the innate rhythmic elements and skillful simple but well-selected progressions. Before too long, a hooky throwback fuzz-out like single “Wires” has you tapping your foot and nodding your head.

“Hank is Dead” is an absolutely fantastic song, capitalizing on the band’s ability to open the throttle and combine some of the essences of both classic rock and classic punk. Deeply grooved and nicely layered, but contained to a virile two and a half minutes, the song is the album’s jewel.

Not so different from that is another quick-hitter, “Painted Parade,” which moves in phases from impromptu drum intro to sharp verses and full-bodied choruses. Closer “Human Herd” is a brooding, even-toned rock and roll homage. The song is not given to wild lyrical emotion, instead letting the slithery, swampy guitar bridges make a statement by winding around the thudding bass.

The pitfall with “Murder the Mountains” is that there are songs that get completely lost. Sandwiched between heavy hitters “Hank is Dead,” and “Throw Up,” “Dirt Wizard” lacks the charisma of the former two and is easy to miss. “The Undertow” suffers the same problem, as the more morose tune gets stepped on by the superior “Into the Eye” and then “Human Herd.”

Red Fang’s “Murder the Mountains” is adventurous without actually being musically progressive. Between the slow, lurking power songs and the flighty, agile throw-downs, there are a handful of musical directions present on the album without ever really leaving the comfort of blues-based rock and roll idiom. This is an old school classic rock record that seems almost out of place in the modern era, as opposed to sitting on the best-selling shelf in the corner store next to Deep Purple’s “Machine Head” in 1972.

Red Fang is a band on the rise. Make sure not to miss “Murder the Mountains.”