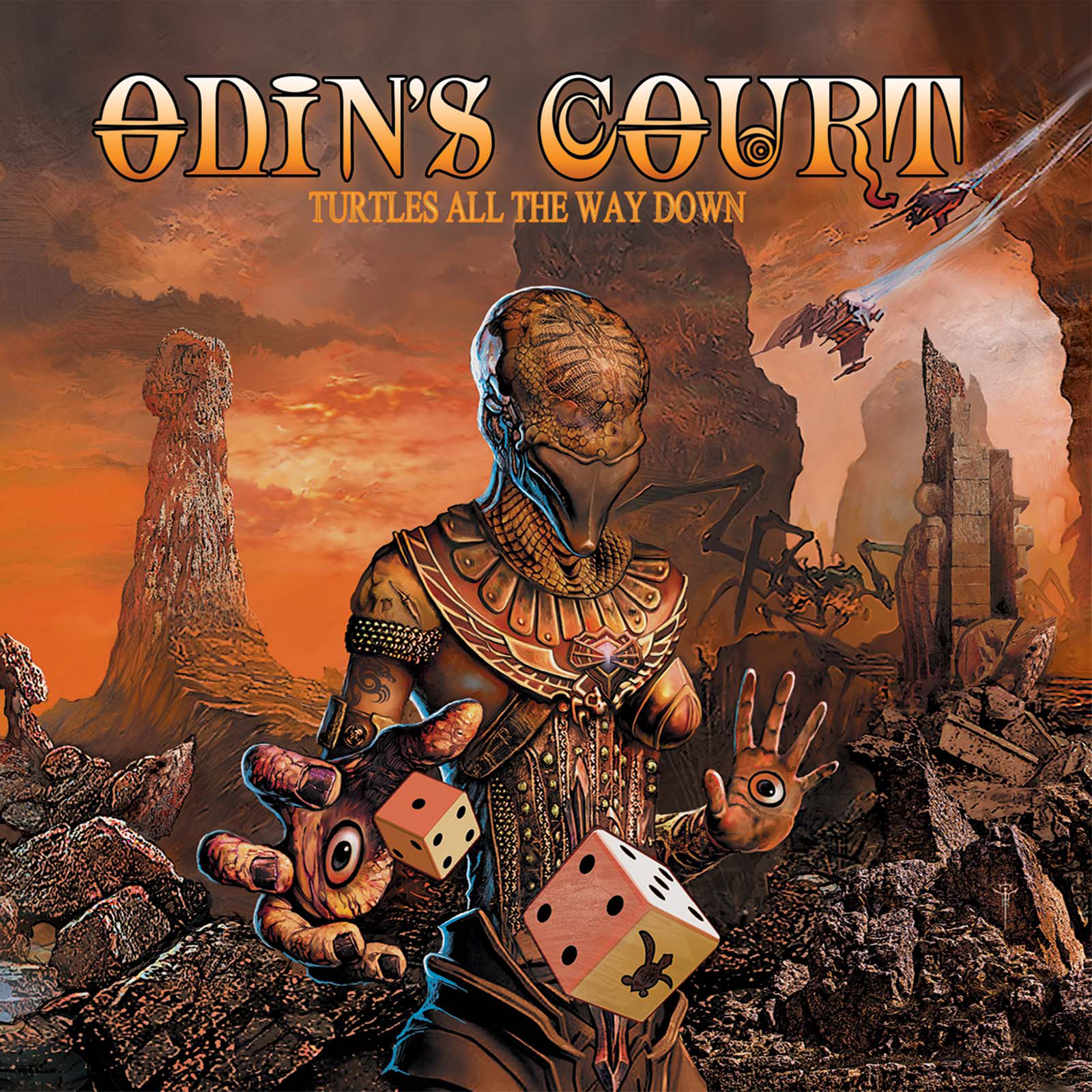 Album Review: Odin's Court - Turtles All The Way Down

There is an old story in the worlds of physics and metaphysics (very different things, by the way) about a confrontation between a scientist and what we will call a layperson. They were debating the origin of the universe, when she proposes that the world sits atop the back of a giant turtle. The scientist asks the obvious question, what is below the turtle? She scoffs, as the the question is ridiculous. The answer, she says, is another turtle. In fact, it's turtles all the way down.

Albums don't often attempt to take on material quite as weighty as the very existence of the universe, but that story is the through-line underpinning the new Odin's Court album, which takes progressive metal down the rabbit hole, seeing just how many turtles there are holding up this blue marble we're trapped on. [Am I the only person who, every time I think of that concept, wants to believe it's actually Dr. Suess' creation, and we sit atop Yertle?]

After the first part of the triptych title track, “And The Answer Is...” kicks off the proper songs with a bang, mixing crunching metal riffs with smoothly melodic vocals. New singer Dimetrius LaFavors rises above the music, his voice a solid expression of what you would expect from progressive metal of this kind. The section with call and response backing vocals is beautiful, but the song is more in service of the concept than existing on its own. Everything about it is good, but the lack of a repeating hook works with the overall concept, but makes it a tough way to open the album.

The song segues into its second half, “...But What's The Question”, which was released as the teaser for the album. This song is even better, with a few crushing riffs, some soaring solos, and a chorus that sticks with you. This half of the song is impressive, and raises the expectations for the rest of the album.

What I appreciate most about this kind of progressive metal is that, while dealing with concepts and heady material, the music itself stays firmly rooted in traditional heavy metal. The mix of technical soloing with riffs and rhythms that are familiar to people without advanced music degrees is one that pays off, both in terms of reflecting the diversity of the universe being pondered, and in terms of making the album easier for listeners to get into. Too often, progressive metal bands race through demanding riffs one after the other, with little thought to whether any of it makes sense to people who haven't broken it down note by note on staff paper. This music does.

The highlight of the album is the lead playing of Matt Brookings and Rick Pierpont, of which there is plenty. Both in the breaks in songs, and the several instrumentals, they take turns playing richly melodic solos that more often than not make the absence of vocals more of a curiosity than an issue. Not many guitarists who don't specialize in instrumental music can take the reigns for that long without losing my patience, but these guys do a fine job of structuring their solos as actual songs, giving you something to come back to and remember besides a flashy run of notes.

Five instrumental pieces might bit much, because the songs themselves deliver. A song like “The Warmth Of Mediocrity” is a great little piece of laid-back melodic metal that takes advantage of the band's ability to layer in backing vocals. When there are songs this engaging, the choice to not focus on those abilities is a bit frustrating.

The album culminates in the 17 minute “Box Of Dice (Does God Play?)”, which is where the band flexes their progressive muscles. Across five movements, the band throws in their most intricate playing, some great guitar/keyboard solo duels, and plenty of beautiful melodies to go along. The song is, really, everything you'd expect good progressive metal to be. It showcases everything Odin's Court is capable of, while wrapping it up in a veneer that is still accessible for the listener. It's a great song, and the only way the album could have been ended.

Overall, “Turtles All The Way Down” is a very good album, but I can't say it's without flaws. There are some wonderful songs on the album, and the overall approach is one that I admire, but I can't escape the feeling that the album got tripped up a bit by the concept. Condensing the instrumentals into two tracks, to reduce the breakup of the songs, would have been a help. There's just a bit too much starting and stopping through the listening experience for my tastes. The main songs get better and better as the album progresses, and it's just a shame there are a few things standing in the way of them being highlighted as much as they could be. I like “Turtles All The Way Down” quite a bit, so don't let that sound like any major criticism. It's just a bit of constructive advice from someone who thinks a good album could have been made even greater.