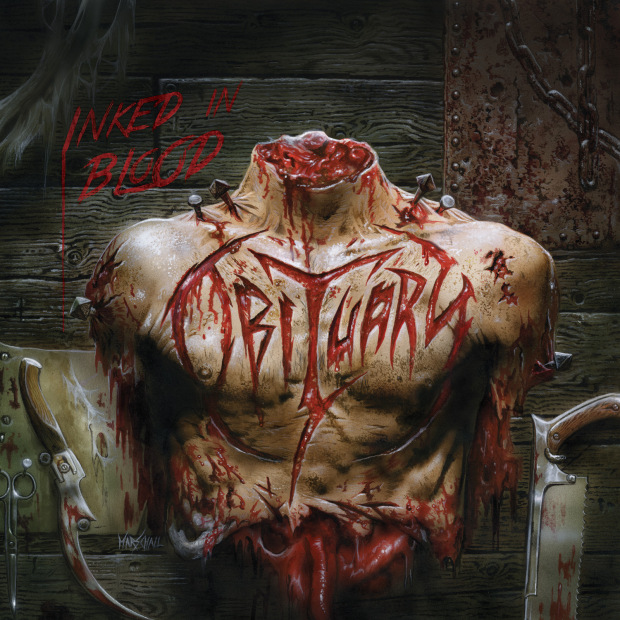 In recent years, there has been a rash of nostalgia, and the first wave of every metal genre has roared back to life with new, and mostly well-received, albums. In the world of death metal, there have been mistakes (Morbid Angel, anyone?), but the majority of the old guard has been producing some of their best albums since the mid 90s. Obituary never really went away, but like all of the bands of their time, they got swallowed up by the waves of new genres that came along in the new millennium. In the last couple of years, however, the nascent style of death metal they helped pioneer has regained its popularity, and Obituary is once again a band that is getting the respect and acclaim their position dictates.

“Inked In Blood” is an interesting release, in that it exists thanks to the newfangled thing called crowdfunding. Obituary fans made sure the band could make a new album, which is a good measuring stick for how dedicated a fan-base is (though I'm not sure it's a sustainable model in the long term), and the resulting release is exactly what you would expect; an album of old-school death metal that barely acknowledges the last twenty years happened.

“Centuries Of Lies” wastes nary a second getting the the point, with the vocals kicking in as though the album has started a few beats too late. The song is classic Obituary, with death-and-roll swagger and vocals that are more pained yowl than disgusting bellow from Hell. The main riff that underpins the song is as simple and un-technical as you can get, which runs the opposite of where death metal is today, and it's all the better for it. Death metal works best when it is stripped down and, if you pardon the pun, brain-dead, which Obituary is. They have never lost sight of the fact that, just because a band is brutally heavy, the music can still be catchy.

By now, you either love or hate Obituary. They haven't changed anything about their style in ages, not that they should, so a release this late from a veteran band is hard to put into words. If you already love Obituary, “Inked In Blood” will be the fix you've been looking for, with plenty of solid old-school death metal. If you've never liked Obituary, especially John Tardy's unusual vocal presence, this album won't change your opinion one bit. In that respect, a review like this is a bit superfluous.

What I notice in the album is how much the tempo affects my enjoyment of the songs. When the band moves along at a good clip, like on “Visions In My Head” and the title track, they produce some mighty catchy death metal that even I, as someone who isn't a big death metal fan, can get into. But when they slow down the tempos, the songs bog down a bit, and they don't have either the doom or heaviness in the mix to keep those segments as engaging.

The other thing that bothers me is the production, which leaves the guitars too fuzzy for my tastes. Instead of hearing the chunk of the riffs, even the muted notes are soft and grainy. It's a tonal choice that I don't think plays to the music's strengths, and leaves the whole thing feeling softer than it really is. If those muted notes cut through and captured the power of the playing, the album would be that much more aggressive. I wouldn't say it sounds weak as it is, but fuzzy guitars are not conducive the crushing at anything but the slowest of tempos.

Overall, “Inked In Blood” is Obituary being Obituary. You know going into it what you're going to hear, which is both its greatest asset and its biggest flaw. Obituary fans will love it, as they should. Obituary is still cranking out solid death metal, long after many assumed they would be gone.