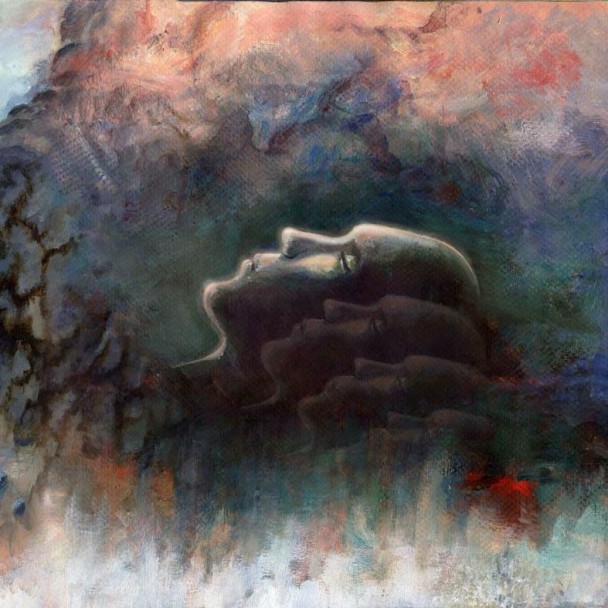 It's not easy anymore for a band to come out and bend the rules of death metal, creating a sound that is utterly unique to themselves. There isn't much room in the sonic palate for diverse sounds, and the songwriting of death metal is formulaic enough that most bands wind up falling into a very narrow range. It's one of the things death metal fans love about death metal, and one of the things that makes it so hard for me to ever get into that kind of music. At a certain point, when everything sounds the same, there's little incentive to keep trying.

Morbus Chron is one of those rare bands that doesn't sound anything like you would expect. “Sweven” is a death metal album, but not like any I can recall hearing. Rather than focusing on the brutality of the music, Morbus Chron's take on death metal has more to do with the death side of the equation, setting up atmospheres of grief and tortured loss. This gives their music a ghostly quality, as though their brand of death metal is trapped in purgatory.

The vocals accentuate this feeling, drenched in so much reverb that they bear little resemblance to a human voice anymore. They are truly the sounds of demons calling from the dark side, and a perfect accompaniment to the music Morbus Chron has conjured up. Normally, I would consider it a shortcut to get around the fact that the vocalist isn't strong enough to be placed up front without tricks, but there is something about the feeling the reverb gives his performance that makes the whole far greater than the sum of its parts.

The other intriguing aspect of “Sweven” is that the music isn't death metal in the traditional sense. There are the tremolo-picked riffs you would expect, but much of the album is made up of material that wouldn't sound out of place on a Ghost album, if they ever took their gimmick seriously. That may sound like a criticism, but it's not. The dialed-back guitar tones, and the restrained playing, do a better job of manifesting the occult than anything a more brutal band has ever come up with.

What I'm not so sure about is how well Morbus Chron do as songwriters. The album ebbs and flows between the tortured screams of death and calm sections that are nearly beautiful, but there isn't always enough sinew tying them together in a coherent manner, nor do either imbue the album with the memorable moments it calls out for. It would be wrong to try to shoehorn a pop hook into this kind of music, but there is little effort made at all to make any of the vocals more than wailing screams. Even trying to make sure their rhythms were more accentuated would have done the album a world of good.

“Sweven” is an album I'm torn on. While I don't think it's as great as it seems to think it is, I can't deny that it's the most interesting death metal album I've heard in ages. On an artistic level, I have to applaud the band on a job well done. They have made a record I'm going to remember, I'm just not sure they've made a record I actually enjoy.