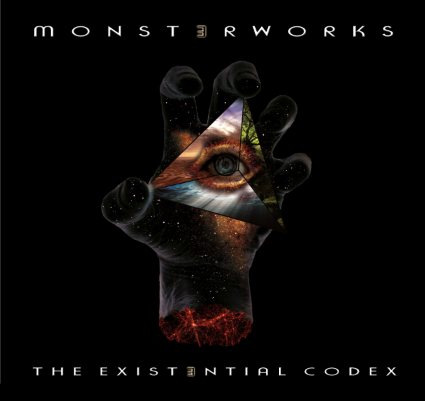 Putting aside my role as a music critic for a moment, one of the things that bothers me as a an of music, and someone who has dabbled in it myself, is the lack of productivity so many bands these days show. It is frustrating to no end when a band puts out a record (good or bad), and you know you have to wait four to five years for the next bite of the apple. Somehow, we have conditioned ourselves to expect professional musicians to write the equivalent of one song ever three to four months, without it being an outrage. Yes, the style of music being played will impact the amount of time it takes to make a record, to a point, but there is simply no excuse for a band that isn't going through a sort of turmoil to take an entire Olympiad to write forty minutes worth of music.

Monsterworks, thankfully, falls on the other side of that problem, producing albums before you have even gotten through digesting the previous one. That can be an issue, I will admit, but having too much music is always a better thing than not having enough. And with that being said, we come to yet another new Monsterworks album.

I have had mixed feelings on the last couple of albums the band put out, which I felt lacked the spark that made “Album Of Man” such a treat. While the band still plays their usual blend of everything under the sun, the pop hooks had been sanded down, which I felt reducing the immediate sense of fun that would make you stay for the deeper aspects of the show. “The Existential Codex” doesn't go back in that direction, but it does show yet another slightly different take on the band's brand of 'supermetal'.

“Higgs Field” is a sprawling opener, with expansive guitars, subtle melodies, and a few riffs that bring a heavy groove into the picture. Monsterworks is always at their best when they give themselves room to experiment, which is why a song like that works, but the following “Ripple Effect” doesn't. The latter song is about as straight-forward a death metal track as I've heard from the band, and it lacks any of the interesting twists and turns that I've come to expect.

“Engine” is far more successful, bridging a soft acoustic opening to an almost black metal song. The guitars are able to bounce from style to style, reminding me at various moments of everything from Megadeth to Deafheaven. Whether or not any of the individual riffs are remarkable, the way the song is structured makes sure that every second is interesting.

I love the sludgy ringing notes that propel “Temple Of Distortion”, reaching back into the heyday of Alice In Chains for some seriously depressing guitar playing. The fact that the vocals throw King Diamond influence into the mix is humorous, but the song backs it up with some deft songwriting and the best melody on the record. This is the song that should have been the blueprint for the record, because it encapsulates what Monsterworks can do well, without resorting to the too pop formula that made “All Suns Die” one of my favorite songs the year it came out.

I would say that “The Existential Codex” is a better record than the last two, if not quite as good as “Album Of Man”. It's a definite improvement, but there is still a need for a stronger sense of vocal melody to flesh out the instrumental craziness. A few more easy to digest hooks would turn this into something special. As it is, it's a good record that sounds amazing with the dynamic mastering job, but it just needs a little bit more. Monsterworks has the skill to make a great record, and there are moments of that here, but sometimes they get bogged down in their diversity.