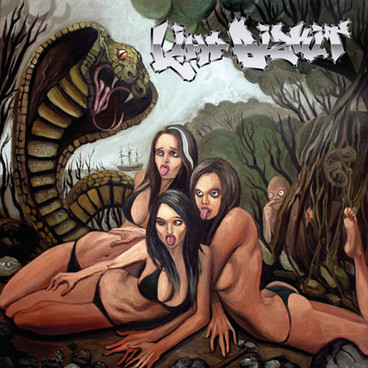 As a reviewer and music journalist, sometimes the toughest task is to remain impartial and objective about a new project that slides across your desk. I’ve run into this conundrum a handful of times, where I thought I already knew that a band would be great or reprehensible; it’s hard to stifle your natural inclination and judge something on its own merits. There can and have been disappointments (Airbourne’s “No Guts, No Glory,) and pleasant surprises (Godsmack’s “The Oracle.”) Inevitably, integrity takes over, and while sometimes you go into a new project cringing with eyes closed, you slog through it, because, to paraphrase, that’s why they play the game.

Limp Bizkit. A name I honestly thought I would never hear again. An anachronism of a fleeting moment in the sands of time, with a legacy lost to the ether. The band (and by association, Fred Durst himself,) had suffered the same career arc as so many other mainstream super-hits; superstardom to irrelevance inside of three years. When I was in high school and rap metal was all the rage (pardon the pun,) Limp Bizkit was among the most marketable faces in metal history. There were red baseball hats everywhere. The 1998 Family Values tour was the hottest ticket on the circuit. Hell, David Letterman was making jokes about them (he claimed “Limp Bizkit” was a Secret Service codename for Bob Dole.) By my freshmen year of college, the entire movement seemed like a wistful, shadowy memory.

I was determined to remain objective, despite the fact that I will be the first to admit I was never on the Limp Bizkit bandwagon. So, “Gold Cobra” slid into the “to-do” folder.

Instantly, it became harder to remain objective about the album’s prospects when guitarist Wes Borland jumped into the fray to defend both the band and the album…almost a week before its release. I understand that reviews are piling up, negative press has been heavy, and there are probably myriad promotional copies (my own included) floating around. Still, to get your dander up prior to the vast majority of the listening audience having a crack at it sparks questions of that very defensiveness. It’s slightly akin to a movie refusing to screen for reviewers until after release: it begs the question of what are they trying to hide?

Ultimately, what Wes said was “There is no way in hell our band would ever have been successful without Fred as the singer. Period. He is an astonishing front man and performer.” The word that is glaringly, conspicuously absent from that sentence is “musician.”

Really, that’s the failing of “Gold Cobra.” It has nothing to do with whatever one’s personal opinion of Fred Durst is. The fact is that “Gold Cobra” just plain isn’t interesting. Musically, each track sounds roughly the same, and not so far removed from any of the band’s previous material. If the album was a dartboard and you were throwing, each section of the board would show an identical score.

If there is any musical shift or evolution in ideology, it is that there is more focus on perfect, hip-hop style beats. It’s entirely possible that this is a conscientious move to try and cater to the very large modern rap audience, particularly when partnered with the band’s experimentation with Auto-Tune (the song is not so-subtly called “Autotunage,” and comes with a complete intro at the end of the previous track, “Loser.”)

For Durst himself, his lyrics are thematically simple and the rhymes are predictable and pedantic. Right in the middle of the album is the three song anti-trifecta of “Get a Life,” “Shotgun” and “Douche Bag,” where the central idea of the songs are “You should get a life,” “Shotguns are badass,” and “You are a douche bag and I strongly dislike you,” respectively. Not exactly Tolstoy.

While many of the songs are edgy (or would have passed for edge in 1997,) it’s mostly a veneer that hides simple and disposable song construction. Limp Bizkit’s problem now is largely the same problem that sank them around the turn of the millennium: their sound is akin to a brightly-colored snack food that looks great, but has no particular flavor and leaves you feeling staunchly unfulfilled. The songs don’t stick to your ribs.

Whether it’s the title cut or any of the other anonymous, cloned selections, they lack the musical ferocity, unbridled creativity and attempted social poignancy of genre leaders Rage Against the Machine. The lack of those elements (particularly the first two,) lends “Gold Cobra” no staying power.

“Gold Cobra” is Limp Bizkit. Same as they ever were. Only now it seems an album out of its time.