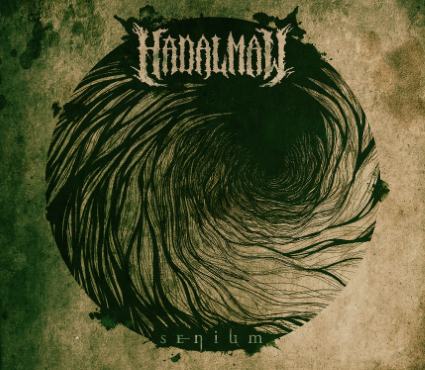 Australia has a long and proud musical history, both in terms of bands who have come from there and bands who have gone there to play.  The people of Australia are clearly in full support of the musical arts, particularly rock and extending into metal.  Still, for all that exposure and support, death metal is rarely thought of as a genre born Down Under.  Set to try and break that stereotype is Hadal Maw, a fast-rising death quintet hailing from Melbourne.

Their record “Senium” is centered around the basic standards of death as we’ve come to know it, but adds a few flourishes in an attempt to break away from the pack.  While the artistic flair of Hadal Maw tends to avoid the common rock mentality of their countrymen, that doesn’t mean that the band lacks artistic vision.

There are moments of groovy promise on this record, brief windows where the elements congeal into a single wall of sound, rather than a surging mass of noise.  The sinister guitar rhythm of “Invisible Eye” speaks to the grinding crush that’s the best strength of Hadal Maw.   At their best, the band channels a lot of works for contemporary death bands like Goatwhore – chugging cadences, brooding riifs and an adrenaline that’s overused but not oversaturated.

Later on we see the great combination of “Ancestry” and “Coil,” the former cut combining the incessant, hypnotic pounding of tribal drums with the latter’s burgeoning rhythmic sense.  Amid the sea of sameness that so often pollutes death metal albums, this mixture stands out as a shining example of how the genre can be inclusive rather than exclusive.  It’s a gamble on the band’s part to step outside the blueprint of their craft, but it pays dividends.

More of that kind of innovation would have served Hadal Maw well, but too often their ingenuity is then submerged back beneath the roiling sea of endless death metal distortion.  “Senium” is dotted with could-have-beens, like the intricate and impressive guitar weaving of “Hypnoguise,” but that even song devolves into a lower form and becomes a paint-by-numbers death metal affair.  The repetitive nature of “Senium” does little to speak to the band’s actual talent, which is evident in the corners and along the fringe.  If Hadal Maw can embrace more outside the box thinking like they do in glimpses here, we could see a band that transcends the simple guises of going down the death metal checklist.  Regrettably, “Senium” is not the album that will get them there.

Bottom line here is this – there will always be a place for metal of this type because there will always be people who want to listen to music that makes their elders angry and confused.  Hadal Maw succeeds in holding up the standards of death metal, yet despite all their promise, “Senium” doesn’t elevate above the mass of smashers and bangers that surround them in their chosen splinter genre.