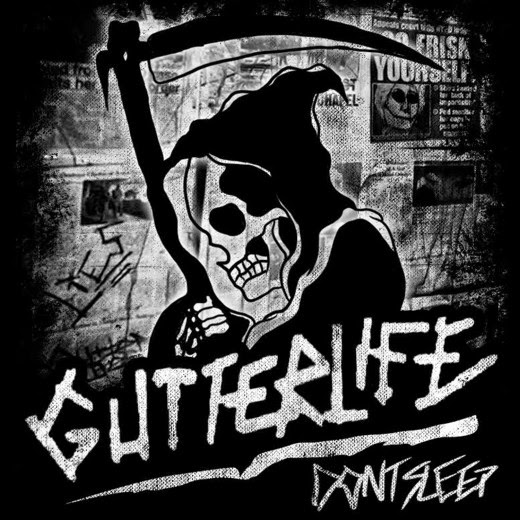 Finally, we have reached the age where there are two distinct schools of punk in the traditional sense.  For those of us past a certain age, we think of punk solely in the most classic sense – the Ramones, the Clash, MC5, the Damned, on and on.

Yet there is a perfectly acceptable second school of punk, more in the vein of Rancid, that emerged roughly fifteen years later and it is in that image that we stumble across Gutterlife and their new record “Don’t Sleep.”

There’s a lot here that works.  The guitars of Gutterlife bite with that characteristic snap that colors so much of punk’s second era, and reminds ever so slightly of the best days of the Worthless United.  The notes ricochet off of one another to create the staccato pinging that gives punk its spikey feel.  Gutterlife does this time and again, whether in the rolling intro of “Complacent,” or the metallic bridge of “Dropping Bombs.”

What really strikes most about Gutterlife’s record is that the band is clearly on message.  They embrace the crude, raging politics of the genre and are capable of both lashing out and speaking with tongue in cheek.  Musically, the record is tight and concise, each musicians playing well in the pocket of the overall rhythm.

Gutterlife’s complete embrace of the tropes of punk is both a blessing and curse for “Don’t Sleep”.  On one hand, this refreshing mastery of the truly punk ideal that less is more.  At what amounts to five lean cuts that never crest four minutes, the record is quick and decisive, with clear thoughts and cleanly packaged musical messages.  Conversely, the whole experience takes only about twenty minutes to blow through, so there’s a sense that this serving isn’t satiating.  The band shows enough promise that you’d like to hear more, but for now there’s no new material to add.

Additionally, the vocals of here are just a shade thinner than they could be.  While not given entirely to the machinations of millennial pop punk, he also doesn’t quite come armed with the conviction to full sell his message.  It’s akin to listening to Travis Phipps from Earth (though the overall vocal quality of Gutterlife is superior,) in that the voice just sounds a little off.

All those things said, it’s hard to ignore the generally solid caliber that Gutterlife spells out for “Don’t Sleep.”  If this be the future of punk, then the genre is in solid hands.  Momentum is a hard thing to maintain, but is Gutterlife can maintain it, they have a chance to make their mark on a genre in need of revitalization.