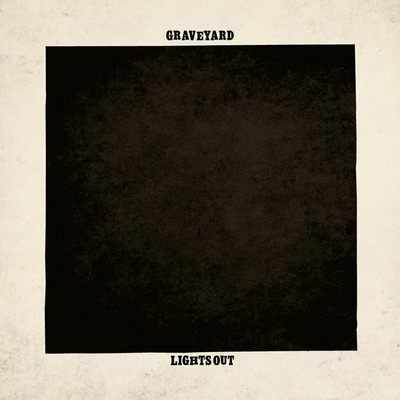 Both as a fan of music, and someone who dabbles in it, I'm a big fan of the vintage revolution that has taken hold in large swaths of the rock and metal world. There's something about stripped-down, simplified, authentic music that is appealing on a level no amount of modern flash can replicate. As more and more bands find new ways to combine computerized sounds with nearly inhuman displays of fretboard acrobatics, the old-school approach of building a song out of a riff and then playing it as a band holds more and more power. Even in the furthest extremes of rock and metal, everything comes down to songs, something that has been forgotten along the way.

Graveyard made great waves with their last album, “Hisingen Blues”, taking the lead in the fight to take back rock from the forces of Pro Tools. Drenched in vintage tones, the album was not only a callback to the days of yore, it was a critically acclaimed rejection of everything rock music has come to be. “Lights Out” follows in its predecessor's footsteps, but is replete with the kind of growth that shows Graveyard is anything but a nostalgia trip.

What Graveyard is able to do better than anyone else is take the aesthetic of the 70's, and filter through that lens a set of songs that shows dedication to replicating more than the sonics of those days. While many bands are treading similar ground, using vintage tones to give their songs a fresh sound, no one is doing it as well as Graveyard does it here. “Hisingen Blues” was a difficult album for me to embrace, despite my affection for the natural sound it projected. It was a solid starting point, an album that showed the potential for what Graveyard could accomplish one day.

That day is now.

“Light Out”, simply put, is everything a vintage rock record could be. Equal parts riotous and somber, melodic and aggressive, familiar and eye-opening, “Lights Out” is the closest thing to a classic rock record that has been put out in ages. Every song boasts a strong, if not inventive, riff, and a knack for songwriting that normally takes several more albums to develop. These are songs that deliver on every level, from the simple yet memorable riffs, to the perfectly accented drumming, to a vocal performance that conveys an array of moods through a set of melodies that are strong without ever being anything but rock and roll.

As the buildup heightens the anticipation for “An Industry Of Murder”, Graveyard is setting us up so they can blow us away. The main riff is sinister in its simplicity, the kind of riff that modern bands would laugh at, until the song unfolds and its killer instinct is revealed. The transitions from moody verses to the raging chorus are perfect, and preview the versatility these thirty-five minutes of music will offer.

“Slow Motion Countdown” is exactly what the title says, a churning blues ballad that swells with such power and emotion that at times it feels like it will explode through the speakers. Juxtaposed with the melodic vocal, the song comes together as something utterly special, the kind of composition that comes along oh so rarely. The fact that “Lights Out” isn't done spouting such songs is a testament to its power. “Seven Seven” is the complete opposite, a short bust of energy that comes and goes before its impact can be fully appreciated. But once it sinks in, it is no less a song, a few chords twisted into an addictive bounce of rock and roll, the sort that has been thought extinct.

“The Suits, The Law, & The Uniform” is all swagger and bluster, rolling along on a hypnotic bass-line, before smoothing out into another pitch-perfect melodic chorus. The formula sound simple, but has been proven to be incredibly difficult to pull off without taking multiple missteps along the way. “Lights Out” doesn't do this, speeding along without missing a beat anywhere down the line. Each and every song brings something different, something essential, to the table. The whole would be incomplete without all of the parts, each of which stands on its own as a perfectly honed weapon of vintage rock.

“Lights Out” is the kind of album I wish I was hearing with regularity, a collection of brilliantly written new songs that carry in them the kind of lived-in spirit that makes them feel like they've been around forever. “Hard Time Lovin'” can't possibly be exist today, but yet I'm listening to it, and it single-handedly wrings more from me than any dozen albums I've listened to this year have. And that is Graveyard's mastery. They have, through this set of songs, managed to come closer than anyone else has to building a time machine, so those of us too young to have been there can understand what it was like when rock and roll ruled the world.

For the readers at home, it's surprisingly rare that Chris and I share an equally high opinion of the same album, so "Lights Out" must be nothing short of a monumental success. Chris hit on most of the points that make the album so memorable and above the grade of many records this year, but I would feel personally remiss if I didn't add a few of my own thoughts as to why I found this effort so remarkable.


I am always a little bit surprised when people instantly refer to Graveyard in the same breath as Black Sabbath, and not because the younger band doesn't have the talent, but because their styles are different. Sabbath's brooding and pounding was a deliberate march through the harrowing marshes of England and points beyond. Graveyard by contrast positively dances through the blues, trading plodding for agile craftsmanship. Before everyone gets their dander up, let's be clear; I'm not calling Graveyard a better band than Sabbath, merely a different band. I think the connection comes through Graveyard's affiliation with their record label and the contemporaries they've toured with.


Nonetheless, to my mind the appropriate comparison for "Lights Out," even more than for the excellent "Hisingen Blues" is Led Zeppelin (which is equally lofty company to be sure.) This is not based on the bands' similar vocal performances (though there is that,) but based on the fact that both bands were most accomplished at changing speeds and presenting the listener with many facets of similar musical ideas. Zeppelin, for all the bombast and rock and roll, was equally capable of entrancing the audience with an intricate but soulful tune, and Graveyard possesses that same all-too-often-overlooked talent.


What I've come to enjoy about Graveyard most, and what they hone to perfection on "Lights Out," is that they never do anything just for the sake of doing it. Most times, I would refer to this as the musician being 'honest,' but normally that term refers to the band being true to themselves, and that's not what I mean. For this album, and pick a track, it doesn't matter which one, Graveyard tells the listener specifically what to feel and when. The band only goes loud (or soft, or serious, or fun,) when their theme, and the music, call for it. It would have been easy for a band as talented as these Swedes to simply pump out an album of ten or eleven excellent, window-splitting rock tunes, but they didn't do that. The band took their time and crafted an album that does not possess a single false moment; they never convey an emotion to the listener that they don't believe themselves. It's something that was common in old soul and blues, but got lost in the sex, drugs and arenas of rock and roll's heyday.


It's very hard for me to say that "Lights Out" is a straight-up better album than "Hisingen Blues," because I like them for different reasons. But that doesn't mean it couldn't be true. "Lights Out" is a second modern masterpiece by an elite band that is not to be missed by fans of blues, rock and the heritage of heavy metal. A clear contender for album of the year.