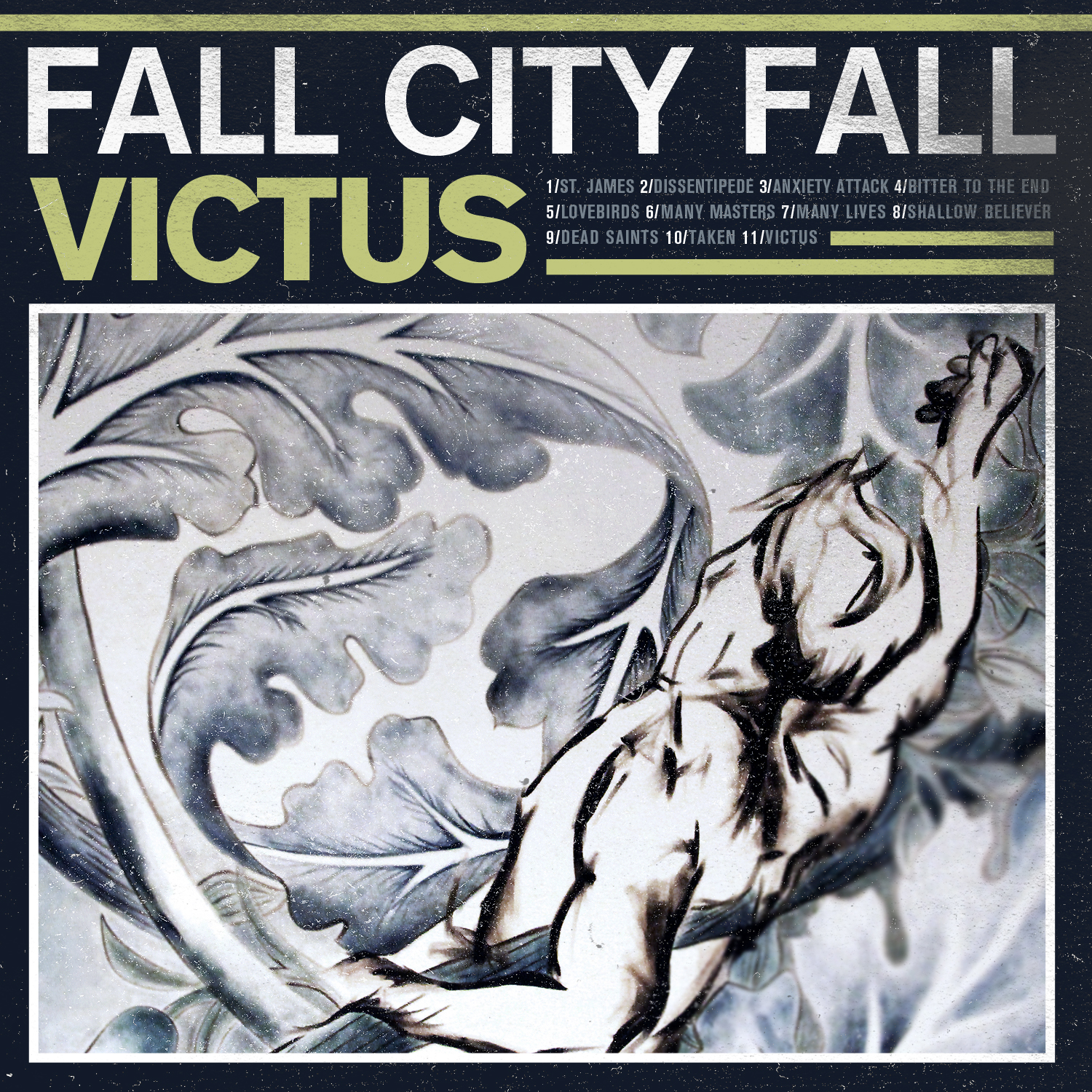 As a reviewer, when you listen to an album, you are invariably struck with a first impression. It’s impossible not to be, as this kind of reactionary assessment is simply part of human nature. The need for thoroughness typically prevails however, and you end up listening to the album again, attempting to attach your first impression to the lathe and hone it down to something that isn’t a cumbersome generality. Finally, you break out the small-grain sandpaper for the last listen, and do spot checks of your mental capture of the record, making sure you’ve picked the right words, centered on the right themes and highlighted the proper…well, highlights.

Calgary’s Fall City Fall and their new release “Victus” have presented me with a rare occurrence: my first impression, after repeated listening, remains wholly intact. It was tailored perfectly, cut and fit without the need for alterations.

Fall City Fall and their new album remind me a lot of Black Flag.

Now, don’t swallow that hook, line and sinker. Fall City Fall is by no means a literal carbon copy of one of the American punk movements most signature bands. So don’t go into “Victus” expecting to hear “Damaged.”

Rather, there is an emotional release that runs similar through both artists, a cathartic symphony that courses unshackled through the heart of both the classic band’s best works and the debut showcase for this young upstart.

The performance of dual vocalists Nathan Zorn and Keenan Pylychaty is wonderfully unhinged in that same way that Henry Rollins used to shout his anger and fear and passion directly into the ear canal of the listener. The guitar work for “Victus” has that familiar brittle, discordant and off-putting character, which only helps guide the tense feeling of a cut like “Dissentipede.” Nearly the entire album is meant to keep the listener on the edge, engaged but not comfortable, vacillating perpetually between anxiety and the comfort of release.

That said, there are moments when “Victus” recognizes that to set the stage for its more schizophrenic pieces, it must also provide a base from which to launch, lest the record have no recognizable benchmarks at all. Thus, we have the splintering riff of “Anxiety Attack” and the visceral hum of “Many Masters,” two songs which present an auditory keystone that allows for translation of the rest of the work.

The combination of off-balance composition and unrestrained vocals lend certain credence to Fall City Fall and the comparison to Black Flag. After all, the latter band helped establish the limits, or lack thereof, for American punk, pushing every conceivable constraint to the precipice of oblivion. Fall City Fall studied that lesson thoroughly and threaded it into their compositional style, writing well beyond the margins in nearly every case, as we see in “Bitter to End.”

Sandwiched in between all this turmoil is the wonderfully stripped down and hauntingly lucid “Many Lives,” a two minute instrumental that impossibly stands out as the album’s best track.

Where “Victus” loses its ambitious footing is in the pursuit of more, allowing it to become too much. The four minute screamfest that is “Taken” falls over the line that separates ‘musically challenging’ from ‘unappealing.’ For this and similar tracks like “Lovebirds,” Fall City Fall momentarily forgets that the audience must feel like they are screaming along, not being screamed at.

It’s also worth noting for production-philes that the mix here is crunchy to the point of jaw-breaking, jagged with guitar dominance and thinned out with very little bass. It’s an interesting angle for a hardcore band to take, but it’s difficult to determine if there’s real songcraft here or just some guitar virtuosity, as even a discerning ear will be challenged to hear the band play as a unit. The album is stocked with cuts that sound like musicians playing at the same time, which is similar but not the same as musicians playing together.

With all that said, my first impression remains the most clear and appropriate one; Fall City Fall is reminiscent of Black Flag in a number of positive ways. For a debut effort, “Victus” has some very solid moments, and the Calgary act flashes a talent for challenging the listener to hang with an album that can be mentally exhausting. That’s probably a blessing or a curse depending on who you are, but if this if the new face of hardcore, there’s cause for fans to have cautious optimism going forward.