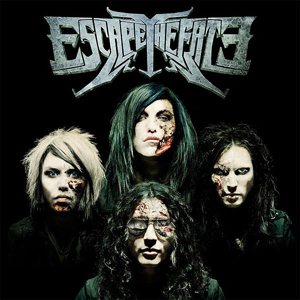 For a band so comparatively young, Escape the Fate has been through the wringer, back again, and still find themselves able to conjure up their third, eponymous album.

What’s striking about this new effort is that from a musical standpoint, “Escape the Fate” is the album that Rob Zombie should have released in place of “Educated Horses.” There are enough heavy, chugging, downbeat riffs that could be isolated and restacked into a convincing Zombie simulacrum.

Now, speaking plainly, there are of course mitigating factors that will inject a lot of qualifiers into the above paragraph. For one, the vocal performance of Craig Mabbitt appeals more to a teenage/pop radio audience, as his presence does not carry the kind of true heavy metal gravitas that befits an album of old-school Zombie standing.

Secondly, the song structure on “Escape the Fate” is not consistently mature, hammering or ugly enough where you could crank it while taking your stripper friends along while you put your monster truck through its off-road paces. It lacks a certain heavy-handed throatiness that would push it into the upper echelon of metal’s pyramid.

That being said, the pleasant surprises on the album exceed the disappointments and overcome most of the feeling of “this could have been more.”

First and foremost, the mix of haunting, single-note-riff guitar and aloof, foreboding keyboard of scene-setter “Choose Your Fate” is enough to make the listener hang around to see what happens next.

From there, the album launches solidly into the high-octane “Massacre.” The opening riff is a catchy, crunchy affair, although the song loses some of its dynamic feel upon slamming into the cookie-cutter chorus. Still, there’s a nice guitar solo and some decent mosh pit fodder in the middle.

The swinging, vibrant “Zombie Dance” is when Escape The Fate is at their best, as they channel the White Zombie two-beat, amped-out formula into their own idiom. It’s that kind of battering, driving consistency that reigns supreme on the best cuts and separates the wheat from the chaff.

That same idea can be seen immediately in the swaggering, pulsating ferocity of “Gorgeous Nightmare” and the mock-operatic decadence of “Lost in Darkness.” Combine those parts with the high-octane rippling of “Day of Wreckoning” and the band’s possible association with Rob Zombie’s legacy is more easily uncovered.

Conversely, the song “City of Sin” leaves the listener feeling unfulfilled, as the potential of the churning, potent guitars and curious post-production editing is chained and bound by the adolescent lyrics. Even by the standard of heavy metal, (which to paraphrase Bill Parcells talking about football, “isn’t a game for well adjusted adults,”) “City of Sin” falls short of the expected eloquence.

As a single, “Issues” is one of the least compelling pieces on the album. It has the necessary dramatic sense and radio hooks that merit it being picked for that role, but the song is hardly the best representation of the band’s total skill.

“World Around Me” is a pretty, harmonized piano piece, with a nice marching beat toward the end and a curious Queen-esque vocal stack at about the three minute mark. It doesn’t quite qualify for the “obligatory power ballad that your sister will love,” pile, but it just barely, repeat, just barely escapes that label.

On balance, the good of “Escape the Fate” supersedes the bad and the band should be carrying themselves with pride for their album and the balance of elements it delicately contains. Not everything here is a masterpiece by a long shot, but for a band that’s been through the gamut of criminal associations and substance abuse rehab, it’s nice to see them marching forward and not giving in. The vocals will turn away some metal purists and the songs can be immature or unpolished, but there are worthwhile moments on “Escape the Fate.”