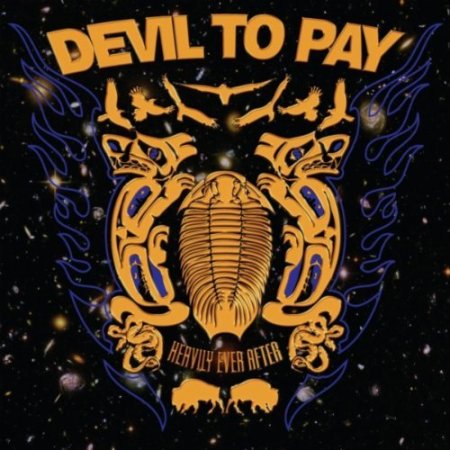 Album Review: Devil to Pay - "Heavily Ever After"

Devil to Pay is a band who has crafted their sound from one sweat-soaked gig in a dingy, disgusting roadhouse after another. The more the exercise continues, the dirtier the band's sound becomes. Constant exposure to the insatiably hungry dregs of ugly riff-based metal fandom has caused Devil to Pay to embark on an endless quest to find the deepest, nastiest, most infectious and punishing riff ever devised. To that end, they've released their new album, "Heavily Ever After."

It's not for me to say whether or not they achieve their goal. Only the metal gods (no, not Judas Priest, I mean that universally,) can say who can claim that title. But it is an awful lot of fun to hear Devil to Pay try.

Even more so than on "Thirty Pieces of Silver," the doom-laced metal mavens from Indianapolis have sacrificed any attempt at speed with more emphasis on slow, memorable, dark riffs of pure metal force. The new ingredient that's ribboned throughout and allowed to show through is the true blues roots from which all slow, plodding metal is allowed to blossom. The very base of "When All is Said and Done" would make John Lee Hooker or Robert Johnson beam with pride.

There's a lyric in the half-funeral march half-chainsaw crossbreed song "Mancuerda" that goes "swim through the mayonnaise..." Silly? Perhaps, but it's strikingly appropriate to the kind of sensation that "Heavily Ever After" engenders. There is distortion-based resistance on every note, leaving the resulting sound heavy, thick and unpolished. Once again, there are no gimmicks, no frills, nothing extra.

There is also no room for apologies. The worst sin of this album is probably that it lacks a certain diversity. But if that’s why you pick up a Devil to Pay album, you’re in the wrong frame of mind in the first place. Variety isn’t the point. Spine-bending power riffs are the goal here, and that is firmly planted in the soil of everything Devil to Pay does.

The double edged sword of that single premise does lead to one small problem. There is no “plan B” on any of these songs. If you don’t like one part of something, there’s no hoping for a second section that sounds different. The speed may be variable within each song, but the theme and tone of that song remains constant. That’s a solid thing for a grungy doom metal band to have in their pocket, but it does leave each song as an all-or-nothing proposition.

For example, I had to give up on the song “Morningstar.” The riff for my ear was flat, and the repetitively insistent drum line in the verses drove me away. Similar sentiments went for “High Horse” directly thereafter. I wasn’t hooked in the first minute, and nothing was going to change.

Right after that, as I broached the middle of the album, its power quintet arrived. From “Troglodyte Jive” to the instrumental “Grimoires,” to the more up tempo “Thinning the Herd,” then “Mancuerda” and finishing off with the sharp “Snake Charmer,” each riff was improved over the last, until my brain rattled with their collective echo for hours.
Each of those songs falls into the pocket of familiarity that Devil to Pay songs have come to reside in so well. That is, they sound like something else you’ve heard before, though perhaps not in this cadence or tempo or arrangement. There’s something that inimitably resonates about each hammering riff that makes the album feel even more relatable. I don’t say that to insinuate that Devil to Pay doesn’t write original material, far from it. Rather, I say that to mean that their riffs and arrangements fit perfectly into the idiom that the band maintains.

"Heavily Ever After" is much more a tank than a sports car. To that end, there are no cheap outs, nothing that is less than one hundred percent effort, and all of it is hard-hitting hammer-contacts-anvil type of stuff. Give it a shot.