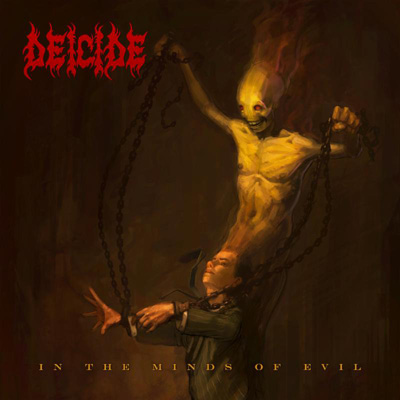 Album Review: Deicide - In The Minds Of Evil

Deicide's career has been one long roller coaster ride. They helped set the standard of American death metal with their first two albums, then fell into disrepair as stagnation set in. As all this was happening, I was completely oblivious to anything they had done, since death metal still only existed in my periphery. It wasn't until the Deicide that became famous was fractured that I came on board. The resulting album, “The Stench Of Redemption”, was a remarkable album, and the shot in the arm the flagging Deicide brand needed. Unfortunately, the new blood didn't last very long, and the following albums have lacked the spark that made that comeback so unexpected.

Glen Benton and his Christ-bashing batch are back once again, but is it possible to be resurrected more than once?

That question comes to mind as I listen to the album. Deicide was given a second chance at being one of the biggest death metal bands going, and squandered it by following up their success with a couple of lackluster efforts. “In The Minds Of Evil” is a referendum on this phase of the band's career, and will go a long way to determining if “The Stench Of Redemption” was a one-off from a dying band, or the start of a promising second act.

That cannot be answered by the title track, which links boiler-plate death metal verses and choruses by sections of galloping guitars that aren't unlike a death metal version of Iron Maiden. It's not quite the kick in the face the similar opening title track on “The Stench Of Redemption” was, but it goes a long way to making the case for Deicide's continuing legacy. That mixture continues through “Thou Begone”, which once again manages to be about as memorable as death metal can be. The constant barrage of paper-thin kick drums is insufferable, but a requirement.

Throughout the album, an odd thing happens. The guitar-work serves up almost no riffs that you would be inclined to remember afterward, but Benton's vocals are able to throw enough hooks into the mix to invert the usual death metal formula. Purists will howl about this development, but it's a nice change of pace.

Focusing on Benton's vocals brings yet more questions to mind. On “The Stench Of Redemption”, his growl was an embarrassing pock-mark on an otherwise great album. He was sloppy, unintelligible (more than usual), and going through the motions. By their last album, “To Hell With God”, he had refined his delivery into what might be his best vocal performance ever, which makes it disappointing that he shows no consistency whatsoever, reverting halfway back to his slurred misstep.

By the time the album is over, I haven't come to a conclusion on what it means. It's a perfectly solid bit of death metal, albeit with a production too shiny for most of the intended listeners, but it doesn't make much of a case for being vital. There isn't anything about this album to separate it from Deicide's other, better records, which leaves it in limbo. It has enough life in it to keep Deicide rolling along, but not enough to call it a second resurrection.