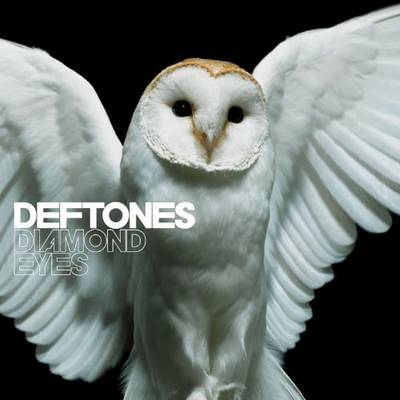 The Deftones are a curious puzzle for me. At the height of their prowess in 1997, they were such a band of the moment. With the wave of grunge receding back to the sea by 1996, there was a considerable void for music listeners who wanted something similar to that vein and yet was an extension of it. “Around the Fur” perfectly fit into that void. Yet, as is sometimes the fate of bands that become over-hyped for the moment, the Deftones were eventually drowned in a sea of contenders for what had been grunge’s throne. As that particular moment of musical idiom passed, the Deftones waxed and waned from the spotlight.

More than a dozen years later, the release of “Diamond Eyes” has me wondering what’s left in the tank for the band. Is it still possible for them to be socially poignant so far removed from their original impact? Certainly, their knack for subtlety has been dulled, as the song titles on this new effort are unambiguous concerning their subject matter. “Sextape” doesn’t exactly leave the door open for a lot of thematic options.

Bonus points for horror fans: the band has a song called “976-Evil” which may or may not be inspired by the Robert Englund-directed movie of the same name. Based on the very vague, melodramatic and repetitive lyrics, I’m going to say it’s not, but you never know.

The Deftones do a number of things right on “Diamond Eyes.” For one, the band’s best skill has always been the ability to keep the listener off balance. They use a series of half-roll riffs and odd cadences that leave one foot off balance. The beauty of this is that even in slower moments (“976-Evil” for one,) the listener can never quite be sure if a huge blow-up is right around the corner. Obviously, this particular gimmick fades after the first listen, but it keeps you paying attention the initial round. It’s kind of like the first time you watched “The Usual Suspects,” were blown away when Kevin Spacey was Kaiser Soze all along, then were less interested the second time. Sorry if you haven’t seen it and I just ruined it for you.

The other thing that helps propel the album from end to end is the contrast of sharp, on-time, almost springy drums laced over with chugging, distorted, grinding guitars. It’s an odd dichotomy of sound, but something that serves to separate “Rocket Skates” or “Royal” from the rest of would-be semi-core bands.

The mix contains a sensible but unusual decision for any band, in that every instrument, vocals included, takes equal place in the final mix. Nothing is stressed over anything else, and no player or instrument is intentionally buried, Metallica style.

The flip side of creating an album where the listener is continually kept off balance is that it can be difficult or impossible to maintain any kind of thematic direction. “Diamond Eyes” has very little overall flow, as literally anything could be around the next corner. It’s tough to get any kind of groove going as a listener, as the grandiose “Prince” dovetails into the hammering “Rocket Skates,” and then the airy “Sextape.” It’s really a mash-up, and you have to pick and choose your spots.

It may seem like a cop-out to say this, but “Diamond Eyes” is a Deftones album not so different from the others. As is typical for them, the album sits somewhere at the halfway point between lowest-common-denominator hardcore and the thinking man’s Dillinger Escape Plan. The band has a legion of loyalists who will no doubt find a way to rally around the album. For the more casual listener, there’s not really a single “wow” factor to the album. “Diamond Eyes” is a curious listen, but not a long-term commitment.