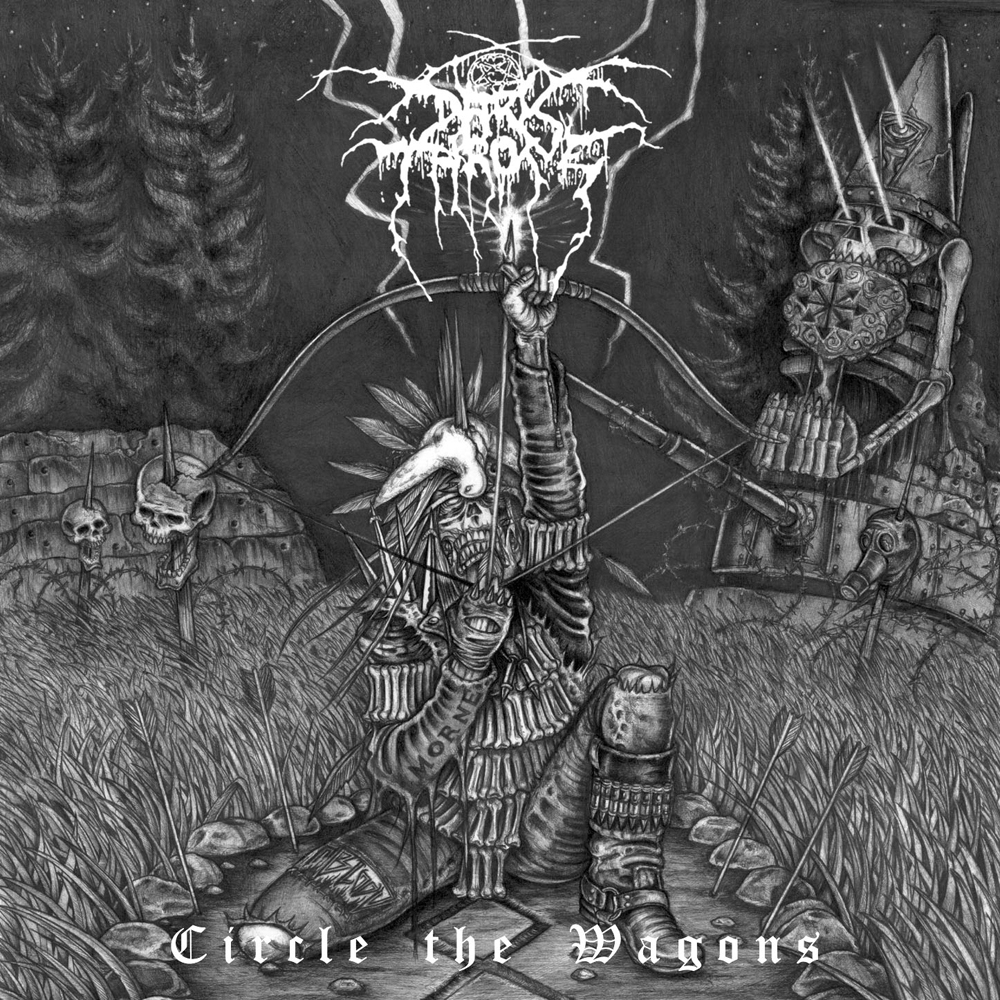 Well, this sure is something. This is the first album review I’ve done in a while where that’s all I can come up with. Veteran duo Darkthrone’s new album “Circle the Wagons” is akin to listening to a random mash-up of the Misfits, GWAR and Venom. Although, it’s assembled out of pieces of those three, more than a proper accumulation of their talents.

The punk influences on the album are readily evident and provide much of the altar upon which the album is constructed. From power chord riffs to four beat count-ins to songs with double endings, Darkthrone demonstrates a solid handle of punk and how those tropes blend into the metal idiom. Let’s be clear though; this is not punk-infused metal in the vein of Anthrax. Rather, it is much more similar to “Static Age” or in particular, “Welcome to Hell.”

One of the things that intrigues me most about “Circle the Wagons” is that it can’t totally be defined into one genre, and the musicians are willing to step outside of convention to achieve their desired effect. The title track is proof positive of this. It’s a rare day when a European band can reach across the cultural divide and incorporate the kind of timbre that it takes to give a song an appropriately western, galloping feel. Yet, there it is, as the song catapults its dramatic vocals to the fore, and then pairs them with just enough grit make the song sound vaguely reminiscent of an old western folk song.

The other aspect of “Circle the Wagons” that I couldn’t help but take notice of is the very relatable and straightforward subject matter. That’s likely a reflection of the very prominent punk influences on the band. While most growl-y, dirty bands with black metal ties from overseas are content to introduce their listeners to a world of bleak fantasy, Darkthrone instead piles on songs like “I am the Graves of the 80’s,” and “I am the Working Class.” Very much similar to the Misfits as I mentioned above, these are straight-ahead simple punk songs magnified through the lens of a slightly more dramatic brand of music.

There’s something curiously infectious about the more classic style vocals that the band uses on songs like “Those Treasures Will Never Befall You,” when compared to the grittier vocals and muddled guitars of the same song. It’s an odd dichotomy, but not an altogether bad one. It serves to separate “Circle the Wagons” and by extension Darkthrone, from all the other Western and European distorted punk metal bands.

Through all the big bold choruses and occasionally heavy head-banging beats, Darkthrone has crafted nine relatively solid tracks. Unfortunately while the album has no singular failing, it also didn’t truly occupy my imagination. With the exception of the title track, there aren’t too many “wow” moments to be had. The entire album is enjoyable, but never really breaks the seal of being something game-changing.

Patience is a virtue with this album, as it didn’t really grow on me until I had run through it twice. Still, “Circle the Wagons” is enjoyable in its own right, and might well be worth your time if anything I’ve referenced hits home for you. Venom fans in particular should give this a shot.