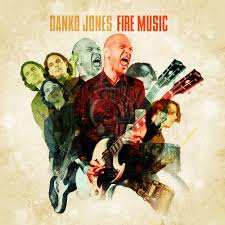 History has long taught us the axiom that ‘experience is the best teacher.’  That may explain the progress of Danko Jones on their new album “Fire Music,” the seventh full studio album in the band’s career, and possibly as a product of their figurative lifetime of experience, their most mature..  This new album is a much different experience than the band’s previous effort “Rock and Roll is Black and Blue” and mostly for the better.

If taking a snapshot of what “Fire Music” sounds like, imagine if Metallica had continued along the “Load” and “Reload” lines until that track’s probable pop-metal conclusion.  Now, one would be remiss to suggest that Metallica should have taken that road, but it is irrefutable that there is a stable marketplace for that style of music.  As such, for a band who endeavors to fill that niche with something more substantive than the boilerplate garbage of alternative radio, and who has the experience (there’s that word again,) in dabbling in this particular style, there’s an open road to compositional success.  Enter Danko Jones, the enduring three-piece from Canada.

Before we get carried away, let’s not use too many sweeping generalities here.  Yes, Danko Jones’ “Fire Music” is bringing much more to the table than the doldrums of Rev Theory or some similar mass-produced schlock, but it’s also not trying to be Shakespeare.  Nevertheless, where “Rock and Roll is Black and Blue” could be criticized for some low-level misogyny, the themes of “Fire Music” abate that trend, leaning more toward the worship of beautiful women than the dominance of them.

Even taking women out of the equation, “Fire Music” sees Danko Jones in a more serious light, taking on themes of revenge for “The Twisting Knife” and general combative mayhem in “Body Bags.”  The music of these songs is suitably a shade or two darker to match, which helps color in the margins of the image the song wants you to see.  “Gonna Be a Fight Tonight” is proof in particular that one need not scream bloody metal murder in order to achieve a feeling of menace, the guitars low tones and growling melody testament to the message within.

“Fire Music” generally does more with less, turning three musicians into a robust rock and roll spectacle, with the big hook of “Watch You Slide” and the oversized bravado of “She Ain’t Coming Home” leading the way.  The voice of Jones himself may not win awards, but it’s convincing enough for the task, gravitating in imitation between the celestial bodies of James Hetfield’s snarl and Bon Scott’s gleeful rasp.  The band’s rhythm section upholds their part of the bargain with a solid understanding of how to craft big hook rock with some metal embossed on the edges.

Where “Fire Music” stumbles is in shooting its own progress in the foot.  For all the things we discussed above, they immediately go out the window as soon as “Getting Into Drugs” hits the air, a fundamentally dumb song with no particular musical flavor and even less subtlety than “Sweet Leaf.”  It’s a moment that’s supposed to be campy and fun, but is unnecessary to the experience and comes off as juvenile.  Even the single “Do You Wanna Rock,” while decent enough, doesn’t inspire creativity or fit especially well with the rest of the record’s more serious fare.  It’s almost like the record could have been divided into two different EPs, one for the baseline goofball fare and one for the material that’s more evolved.

“Fire Music” has some nice moments, but it’s an uneven ride.  Danko Jones has been listening to their career experience and learned a few great lessons, but remains a B or B+ student.  All that said, it’s the band’s best record in the last two or three album cycles, so if this is on your radar and you can stomach a cringe here or there, “Fire Music” isn’t a bad choice to get you through the last days of winter.