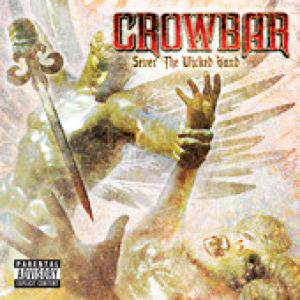 The entire experience of Crowbar's "Sever the Wicked Hand" comes down to a good news/bad news equation. The good news is that "Sever the Wicked Hand" is a brutal, straightforward attack on the senses that rumbles ahead with the kind of speed-killing finality usually reserved for broken ankles and police spike strips. The bad news is that from beginning to end, that's really everything the album has to offer.

Crowbar has sharp teeth bared and is uniformly hostile, but lacks the subtle levity usually present in more well-rounded brands of metal. That's not a reference to the kind of comedy that was pervasive in metal during the mid- to late eighties, but rather the general sense of the absurd that is a natural accompaniment to most metal music.

While the lack devil-may-care bravado makes "Sever the Wicked Hand" remarkably dark and impossibly honest, the unflinching dirges stacked one on top of another end up serving to almost literally beat the album’s emotion to death. There’s no variation. Even in the faster moments, such as the first act of the title track, the theme never breaks from the idea of pulverizing, throaty guitar and minor chords. The end effect is sort of akin to what Type O Negative’s “Bloody Kisses” might have sounded like if Billy Milano had been the vocal talent.

“Liquid Sky and Cold Black Earth” is in the same rough ballpark as so many tracks from super-sludge band Autopsy. It is a crushing, relentless show of force, strung out over six minutes and change. By comparison however, where Autopsy gets away with songs like that because the music is a soundtrack to molten rivers and the forces of death run amok, Crowbar’s lyrics are attuned to emotional adversity, which quickly becomes melodramatic in light of the backing sound.

The album’s best cut is the wickedly groovy “Let Me Mourn,” which prominently features one of those riffs that just plain works. Some of the song’s appeal comes from its understated versatility: this song could be played at almost any speed, and that riff would still bring it.

Right behind “Let Me Mourn” in terms of quality is “I Only Deal in Truth” which could be the album’s most inventive track. The use of heavy, repetitive percussion to artificially boost the song’s tempo is a nice touch, and the back half of the cut turns into high-caliber mosh pit fodder.

There are nice moment sprinkled throughout “Sever the Wicked Hand,” and the unbridled fury of the music is a fine argument, particularly in today’s metal scene, which has lost its taste for that kind of no-holds-barred attitude. Crowbar’s approach doesn’t leave them a lot of room for experimentation outside that paradigm however, which means that you could listen to just the first half and not miss much new on the second. The band really only employs two variations of the same trick; they either go from fast to slow, or slow to fast.

Crowbar’s “Sever the Wicked Hand” is a textbook example of how sludge metal can be gripping and powerful. Conversely, if listeners either aren’t fans of, or aren’t prepared for, that kind of musical experience, the album is going to be about as scintillating as reading that textbook.