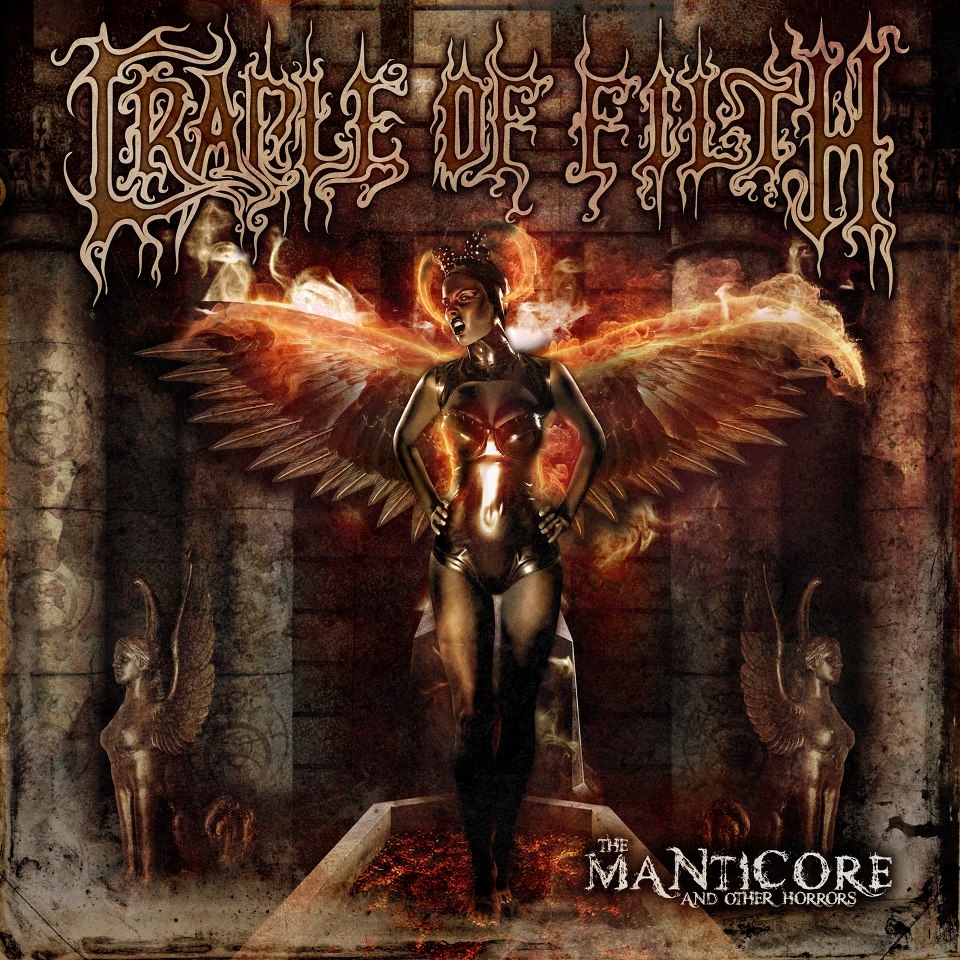 Album Review: Cradle of Filth - "The Manticore and Other Horrors"

Cradle of Filth is a band with a history and track record as long and winding as the image of paths through a creepy, haunted forest that they try to capture and imprint on disc. Under the steadfast and dedicated leadership of Dani Filth, Cradle has always tried to stay one step ahead of the heavy metal game.

Cradle of Filth remains the standard bearer for extreme metal, a term that means less and less as the media and fans’ compulsive subgenrefication pulls apart the family of extreme metal and places the composing members amidst the variable genera. Yet, extreme metal remains the most appropriate label for Cradle of Filth (if they must have one) for how else can one define the unique nature of their music?

No one has ever challenged Cradle’s adaptability, as their musical career has run from brash to theatre and back again. The words “Cradle of Filth” have meant different things at different times, and this album sees Cradle pare down their sound while trying to maintain the ingrained sense of macabre fun. The album truly picks up steam in cuts like “Siding With the Titans” and “For Your Vulgar Delectation,” which both throw any notion of pacing out the window and go in guns blazing like an old Contra video game. This is when “The Manticore and Other Horrors” is at its extreme metal best.

Guitarist Paul Allender hinted that this record may see Cradle take a step backward to go forward, consciously deciding to drop much of their recent trend toward symphonic or orchestral songwriting. Instead, Cradle returns to some of their deep-seated punk and classic speed metal roots. There’s been a precedent for this in recent years, as metal has seen everyone from Metallica to Ram, Slayer to Exhumer, at least touch base with their foundation, most of them with positive results. So too it is with Cradle of Filth, as their new record “The Manticore and Other Horrors” returns indisputably to the speed riffs and classic machine-gun composition that marked their releases for so many years. The grand keyboard amalgams that colored so much of recent works like “Darkly, Darkly Venus Aversa,” are present, but have been relegated to the background as accent pieces. You only need to get as far as the album’s second track, “The Abhorrent,” to understand the new-ish take on the band’s direction.

Allender, to his credit, keeps things interesting with his inimitable and original playing style. The songs are, from beginning to end, stacked high with off-balance cadences, odd time signatures and unique note progressions. This quality has always lent Allender, and by extension Cradle, a built-in sense of curiosity; even if the riffs aren’t written expansively, they are played such, at worst turning the ordinary into something academically attractive. The drop tune, note heavy power-riffing is a welcome return to Cradle’s style, as it allows them to be more focused and substantially less flighty, which makes a noticeable difference on tracks like the title track. The meaty guitar solos laced throughout don’t hurt matters, either.

There’s not a lot to knock on “The Manticore and Other Horrors” except the usual dissent that their detractors register. The songs are extremely rough around the edges, not nearly as neat and tidy and immediately rhythmic as some of Cradle’s contemporaries. Additionally, this is an album that knows only one speed and one attitude, so those looking for in depth analysis will find that the album blows by them before they can insert the scalpel. But these “faults” have become so endemic to Cradle that they simply have to be recognized and accepted as set pieces of the band’s idiom. Personally, I don’t think I’ll ever get used to Dani’s occasional train-whistle shrieking, but I’ve made my peace with it.

“The Manticore and Other Horrors” is a fine return to the power-driven, guitar-fueled, ever so marginally less dramatic Cradle of Filth that helped establish them in the annals of metal. At some point in the future, it might be nice to see some of Cradle’s songwriting versatility all on one record rather than across several, but at this point I’m picking nits and being lazy. This latest album is an excellent addition to the Cradle catalogue, and not only a near-must for fans, but a good gateway for those who might want to try Cradle again, or for the first time.