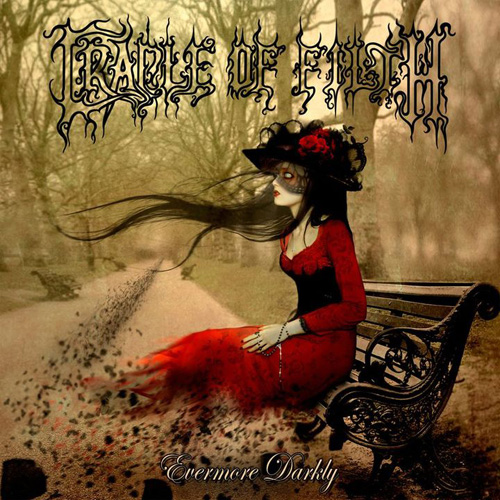 “Evermore Darkly” is slightly thin as a companion piece to “Darkly, Darkly, Venus Aversa,” but that doesn’t mean it is without value.

Comprised mostly of re-cut or re-imagined tracks from the main album, “Evermore Darkly” presents the known cuts from that album in a style that is less abstract. “The Persecution Song,” is reworked in a way that makes the song more accessible while not losing its original pounding, or the effect of Paul Allender’s off-kilter, rangy guitar.

The EP begins with a new cut that could have just as well landed on the parent album. “Thank Your Lucky Scars” possesses that curious mix of blast beat, simple guitar riff and lumbering chorus that just screams “Cradle of Filth.” Dani’s raspy, train whistle vocals color the song end to end, giving it just enough of that haunting, dripping-entrails feel that the British extreme band uses like a signature.

Other than that, there’s a well-refined (and truly enjoyable) cut of “The Spawn of Love and War” to be had, as well as a fully realized and wonderfully rendered orchestral cut of “Summer Dying Fast.” The final track on the EP, this last song is characterized by stringed swoops and ornate arrangement, in steadfast contrast to the usual dark opulence of Cradle of Filth. It’s almost as though the cut is a companion piece to the companion EP to the original album.

Worth noting is the trance techno remix of “Forgive Me Father (I Have Sinned,)” titled “Forgive Me Father (I’m in a Trance.)” Whether or not the song is necessary or well executed is a matter of some debate, but it is a curious, pace-changing and dare I say fun anomaly. This is kind of re-invention that companion EP’s and remix records were designed for (see also: the techno remixes of “New Breed” on Fear Factory’s “Hatefiles.”)

With all that said, the statement at the top must be addressed. “Evermore Darkly” has some worthwhile sections, but is short on truly new material. With the exception of one new song and a couple well presented pieces, there’s nothing revolutionary or awe-inspiring here. For Cradle of Filth fans and completists, this is worth a go, but for listeners looking to be exposed to the band for the first time, you’d be better off obtaining the “Darkly, Darkly, Venus Aversa” album proper.