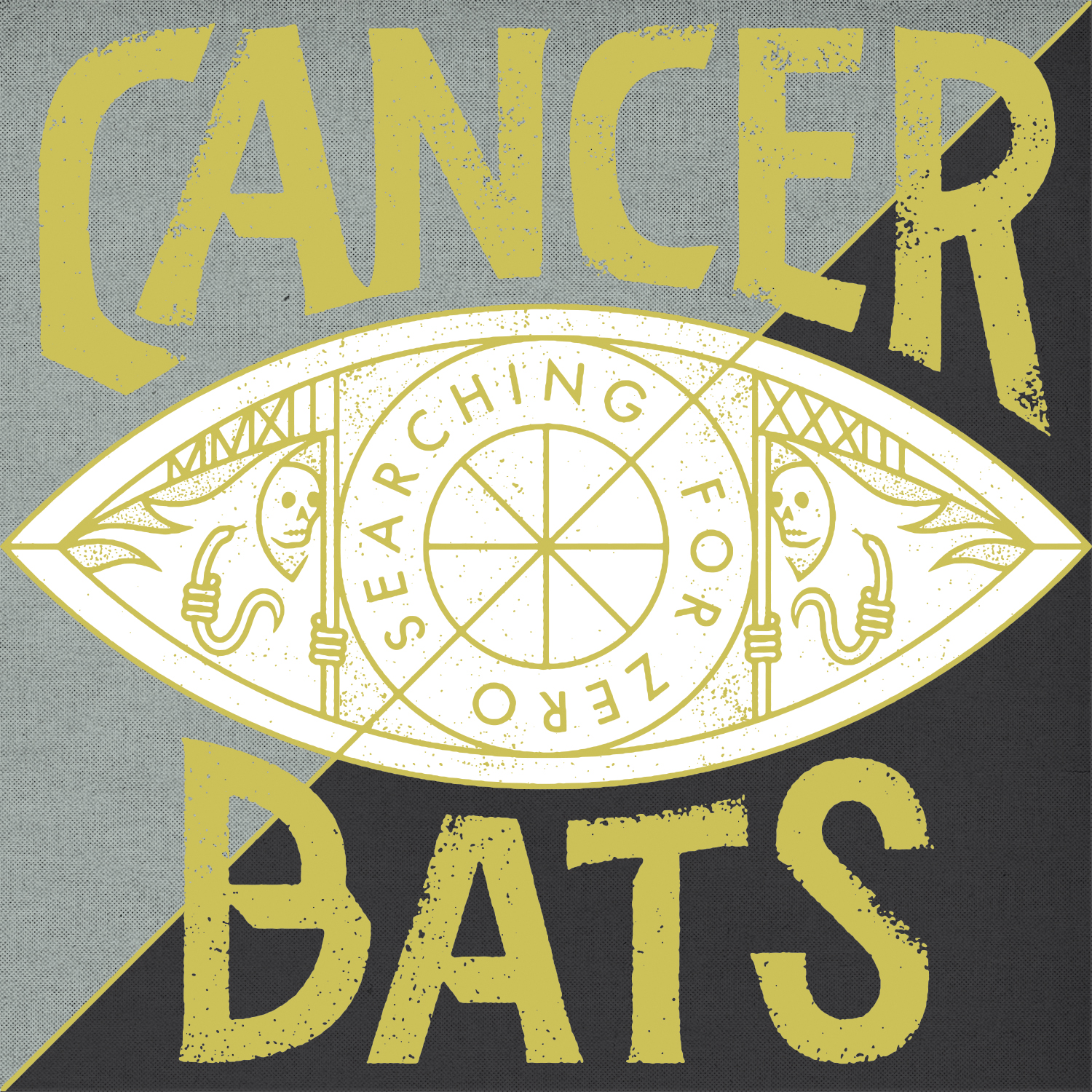 For Toronto’s Cancer Bats, 2012’s “Dead Set on Living” was a triumph.  The record was pure power encased in turgid, overdriven fuzz.  Screamed anthems of relatable themes and the individual’s power (or lack thereof.  Also, one song about the Large Hadron Collider and gravitational physics,) dotted the landscape, building idols and tearing down others.  With their career hallmark to this point established, the heavy duty for the band now is to try and replicate that success with their new record “Searching for Zero.”

“Satellites” may be the opening single for “Searching for Zero,” but the record really begins to gain traction with “True Zero,” the second offering and the first that infectiously grabs the listener and screams in his or her face.  The song’s hook is so easy it could pass for a rock anthem if it weren’t so obviously more than just an arena piece.

For all the early momentum of “True Zero,” the album shifts and finds a steady pace beginning with the broken-glass chug of “Beelzebub” and doesn’t relent until the finish line.  Unlike the bombast of their previous record, Cancer Bats find themselves more evenly paced, channeling their raw energy into a conduit of measured malice and punishment.  It’s a new turn for the band and a small twist away from their hardcore roots, but that doesn’t mean it’s a poor decision.  The Canadians ply their trade with confidence, mixing in systemic bursts of musical violence in the opening of “All Hail” or the choking passages of “Devil’s Blood.”  The band’s ability to seamlessly weave their competing tastes is one of the album’s strengths.

The press in advance of this album spoke at length about the band’s desire to pull from their chosen roots, relying on lessons learned from the pendulum grooves of Black Sabbath.  There is a deep-seated understanding of the basic tenets of metal running through cuts like the mentally anguished “Cursed with a Conscience.”  The boilerplate riff of “Buds,” if you didn’t know better, might be taken from a Sab Four record during the “Sabotage” era.  It’s a modern interpretation of the metal that came before, a reminder that what worked forty years ago still works now.

Vocalist Liam Cormier’s vocal style probably comes as an acquired taste for most, but his passionate abrasiveness fits the proferred menu perfectly.  It’s hard to imagine anyone doing a better job of singing these songs; too clean and the tracks would lose impact, too harsh and they lose believability.  Cormier’s unique pitch and timbre maintain just enough clearly visible humanity to characterize these songs without becoming too tongue in cheek or too cartoony.

For all of that, the real take away from “Searching for Zero” is the beautifully unencumbered fatalism that underscores the record.  While that no doubt comes as unusual praise, what makes this particular strain of pessimism so noteworthy is that it is presented without decoration.  So much of metal as a genre tries to employ deep metaphor in its apocalyptic message, with middling success.  By contrast, in the trailing moments of album closer “No More Bullshit,” Cormier, with added emphasis on each repetition, chants in part ‘We face annihilation/One chance to get it wrong.’

“Searching for Zero” succeeds as a piece of music, but in a different fashion than the overwhelming power of “Dead Set on Living.”  While hardly subtle, this new record trades more in the twisting of knives than the explosion of guns.  It was probably a highly intelligent decision to change the album’s musical focus, rather than try to release “Dead Set on Living, Part II.”  This album pulls from different inspirations but still maintains a strong Cancer Bats feel.  Definitely worth a listen or six, particularly if you’re ready for a slightly different experience.