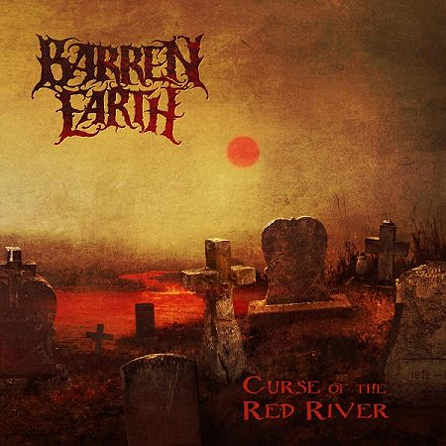 Born from the combined talents of current and former members of Amorphis, Swallow the Sun and Kreator, Barren Earth is a unification of Finnish metal veterans making an album.

The first thing I noticed is the satisfaction the band has taken in the product they've created. That can be a hard thing to detect in a recorded release, but there's something about Barren Earth's "Curse of the Red River" that screams pride. They believe in every note, every tone, every growled word.

Ultimately, "Curse of the Red River" taxis down the runway nicely, but fails to really take off. By the time I got a little more than halfway through the album to "Ere All Perish," I really felt I had heard all the album had to offer.

Don't get me wrong, there's a lot of interesting stuff happening here. The layered harmonies and emphasis on piano-style, scene-setting keyboard lend a different, unexpected sound. The song "Forlorn Waves" is the best example, as it has a kind of macabre grace and delicacy.

The title track is a dire, powerful exhibition of plodding metal that's meant to signal some manner of impending, unavoidable doom. The stack of dramatic musical ideas and full, grand choruses are reminiscent of a more death-oriented version of the classic album "Dirt." The pacing of the song is excellent as it is on much of the album, but the well-arranged, flute-based coda would have been better served as a separate piece, as it extends the song too far.

Everything on the album, especially "Our Twilight" and "Ritual of Dawn" is grandiose and filled with eloquent solos and admirable musicianship, but seems content to create a feeling and have that be the end of it. It's a little akin to watching "Star Trek: The Motion Picture," in that after a while, you just want to yell "Okay! I get it! Move on!" The drawn-out nature of the album made me eventually glaze over, though I was consistently impressed with the production and presentation throughout, even in the slower moments.

As a side note, there are truly shining moments, as I thoroughly enjoyed the sparse snare drum march in the middle of "Cold Earth Chamber."

The one song that breaks the chain is "The Leer," which by comparison is faster and has a better developed sense of urgency. Even so, the song never truly breaks out, and adamantly choosed to maintain the spactacle of the album's atmosphere.

If you're a true fan of atmospheric doom metal, black metal, or Scandinavian folk metal, you might want to take a shot here. There's a lot of good stuff on the album that's up that alley. Patient listeners willing to sift through and absorb the album will be rewarded. Fans of speed metal or more straight-forward, accessible heavy metal may not be so thrilled.