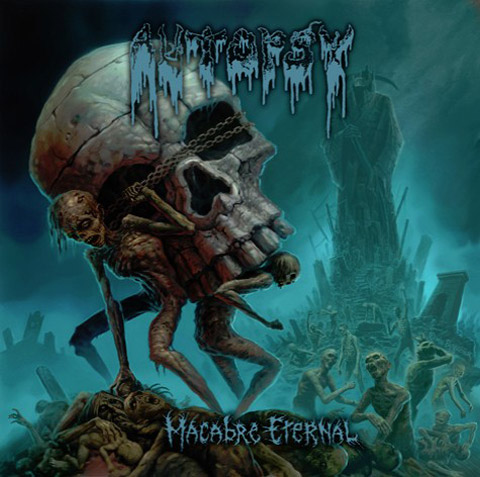 Over all the years, projects, lineups, albums and EPs, Chris Reifert has become nothing if not the picture of consistency. Reunited with original Autopsy members Danny Coralles and Eric Cutler, and joined by Joe Trevisano of Abscess, Autopsy has released “Macabre Eternal,” the band’s latest unapologetic assault on musical convention, trend and quite possibly good taste.

For this particular outing, Reifert has promised that “the album will contain no repeated EP tracks, no re-recorded old songs, no triggered trickery, and nothing less than the pure death metal brutality that Autopsy has always delivered.” In a genre where absolute digital perfection and timing has become pervasive, it’s nice to see a rogue musician sticking to his honest guns.

As a by-product of that candor, there are certain givens that fans will be aware of when delving in to the disparaging pits of “Macabre Eternal.” For one, there will be disparaging pits. The entire album, similar to most of Autopsy’s material and certainly all of Abscess’s, is like a Brian Lumley novel put to music. There are the usual evocative lyrics concerning blighted landscapes, depraved self-torment, ghoulish, dripping entrails, and naturally, the unknowable limitations of the human mind’s latent insanity. Unlike most in the genre however, Reifert uses plain phrasing to illustrate very specific points; he never makes the listener reach for a dictionary (Slayer fans take note: you will not hear the word “abacinate” on “Macabre Eternal.”) The simplicity of the language helps create a very lucid image of the subject matter, all of which goes to the album’s…well, “charm” is the wrong word, but you get the idea.

Autopsy’s new effort has some defining moments, most of which come from the straightforward brutality of the music. Often pre-occupied (sometimes to a fault,) with creating a bleak, toxic atmosphere turgid with slow depravity and shambling doom, “Macabre Eternal” picks spots to find an unmistakable rhythm. The drop-of-a-hat virtuoso solos during the title track lend just a touch of variety to the usual putrid (and I don’t mean that as an insult) fare. “Always About to Die,” contrary to the usual Autopsy pattern, is actually a song with some definable groove, and probably the album’s signature piece.

Little rhythmic or speed metal sections are parsed throughout “Macabre Eternal,” and that helps elevate the album’s notoriety, particularly from the typical sonic morass of Autopsy’s previous albums. That said, this is not going to change anyone’s opinion of Reifert or his band, and the casual listener need not apply.

The downside here is that even with a few sterling parts of interest, “Macabre Eternal” isn’t really sufficiently different from anything Reifert has ever done. Some songs sucker you in with curious beginnings (the opening dirge of “Sewn Into One”) but then lose that traction as they thunder into the fifth or sixth minute (or tenth, in the case of “Sadistic Gratification.”) For casual or non-fans, Autopsy’s tendency to drag out a theme should be counted as present here.

In the end, “Macabre Eternal” is fun when you need to scratch that itch for something laudably unpretentious and vulgarly visceral. That said, satiating that itch doesn’t often require a full album, or in the larger scheme, more than one. Ultimately, that quota is determined by the listener’s taste, but as a parting shot, let’s leave it at this: “Macabre Eternal” is an apt album title for a band that shall always be that. Take it for what it is.