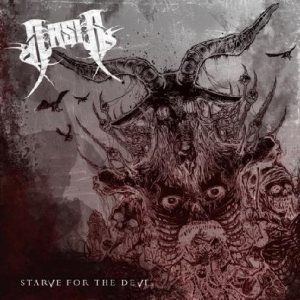 The idea behind east coast thrash metallers Arsis is a good one. With “Starve for the Devil” the band has attempted to bridge the gap between European style artistic metal and American-born biting, ugly metal. The end result gets caught in the tug of war between the two ideologies and never really bursts through to meld them creatively.

“Starve for the Devil” is noteworthy for its ability to split the difference between convoluted and overly simplified metal, but in doing so appeals to a lowest common denominator that robs the album of some of its originality. Rather than blending the best of Children of Bodom and Toxic Holocaust, the listener receives part from one and then part from the other. A song like “The Ten of Swords” features an amazing buzz saw guitar solo featured over a chuggy rhythm riff, but the rest of the song’s meager offering doesn’t quite live up to that standard.

There are moments, like “March of the Sick” where the synthesis is well managed and presented, as the song is a dirty, nasty American riff with European styling. “Closer to Cold” is a fist-pumping Western anthem with an almost graceful lead guitar hook. Even the first cut, “Forced to Rock” has both a solid sensibility and a genuine tongue-in-cheek feel.

I even like the stilted, disjointed production of “From Soulless to Shattered,” as it sounds reminiscent of an accent theme from some kind of drama/suspense television show. The entire experience echoes from that, as the plodding doom sections nicely contrast the breakneck riffs.

Over and done, there is a lot of fast-paced metal crunching, as the guitars are sharp and the percussion flawlessly jarring. The overall musicianship is solid, and combing the album with their live show, I can tell how much these guys believe in the product they’re producing. Everything about this album is honest and the product of hard work.

It’s difficult to call any part of this album “bad.” Repetitive may be more appropriate, as by the time the listener gets to “Escape Artist,” you feel like you get the general gist. It feels like “Starve for the Devil” never really evolves, and holds both high-flying metal influences and funeral march metal influences at arm’s length, rather than bring them together. The end result is catchy and listenable, but not all that imaginative. It reminds me of the Havok album “Burn” from 2009 in that it’s okay for a spin, but doesn’t really grip me.

I feel like I’m damning Arsis with faint praise, and maybe I am. Just be advised that “Starve for the Devil” is worth a listen, but don’t expect your musical world to change. A lot of this you’ve heard before.

I will say this: “Half Past Corpse O’Clock” is the early clubhouse leader for best song title of 2010.