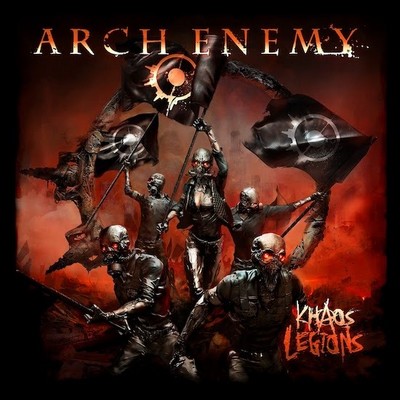 After the release of the comparatively successful “Root of All Evil,” it became evident from the fans’ clawing that they wanted new material from Arch Enemy, and they wanted it fast. That album’s re-recordings of early AE songs was a fun romp, but only served to whet the crowd’s appetite.

So, “Khaos Legions” comes barreling out of the din, the first new studio material from the band since 2007’s “Rise of the Tyrant” which landed to generally positive but ultimately mixed reviews.

“Khaos Legions” is a capable singles hitter, but that’s probably slightly below the Mendoza line for an album that was anticipated to be a serious heavy bat in the middle of the lineup.

After a boiling intro that builds into what should be a concussive crescendo, the album instead tails into “Yesterday is Dead and Gone,” which has a nicely arranged composition with some impressive guitar work that stays in the pocket. This could have been a great teaser for the kind of album to follow…

…but “Khaos Legions” ends up not being that album. “Bloodstained Cross” begins with a buzz saw, but reneges on the promise of that opening and settles into a series of disjointed, factory stamped choruses. It’s a disconcerting feeling as you listen and realize that Arch Enemy can’t quite decide who they want to be.

It should be noted that Angela Gossow’s usually abrasive and destructive vocals have been production-ized into something less than their full bore ability. Thinner than normal, the end result sometimes carries into the slightly ludicrous, as during the verses of “No Gods, No Masters,” she sounds like Leia in the Boussh helmet telling Han that he has hibernation sickness. No, seriously.

This new effort features a lot of down-shifted tunes, heavy on presentation but light on personality. The emphasis on slowing down songs into a more recognizable pattern (and injecting some of the basic tenets of mainstream rock,) turns "Khaos Legions" into an album that is swollen in the middle, as many of the tunes get bogged down in powerful but plodding dirge.

Speaking of swollen, "Khaos Legions" weighs in at a hefty fourteen cuts (sixteen on the Japanese version,) with only a couple of throw-away connectors. What makes the length more suspect is that as the album pounds into the later tracks, the speed of the album, and its associated ferocity, picks up. For "Cult of Chaos," "Thorns in My Flesh" and "Vengeance is Mine," the pedal is smashed to the floor and a more classic incarnation of Arch Enemy begins to burst at the seams. So, it begs the question: if "Khaos Legion's" engine is capable of this kind of asphalt-devouring performance, then why did we slog through so much of the beginning in low gear?

That aside, "Khaos Legions" does a number of things right, not the least of which is the impressive work of the Arnott brothers. Clearly in step with the stylistic change, the duo spins an accomplished set of solos and tandem rhythms. While the album's restrained pace doesn't allow for their typical blistering style, the Arnotts embrace the new parameters by instead infusing their playing with a touch of soulful indulgence.

Also not lost on "Khaos Legions" is the sense of the grandiose, with drum accents and staccato riffs that create feelings of either gigantic despair or encouraging perseverance. This is brought to a head during the high-ceiling-ed "Cruelty Without Beauty." Even some of the early cuts that are more prone to shambling, such as "Under Black Flags We March," can conjure realistic and effective senses of baroque dread or dramatic forging on.

There's nothing fundamentally or musically wrong with "Khaos Legions." However, it does represent a shift in what has come to be called "conventional thinking" in regards to Arch Enemy. As a result, if you've never been a fan of the band before, try this for something that's a little more style, and a little less punch. It's not a bad album, but given the number of top-notch death/melodic death albums already released in 2011, it may not stand out from the crowd.