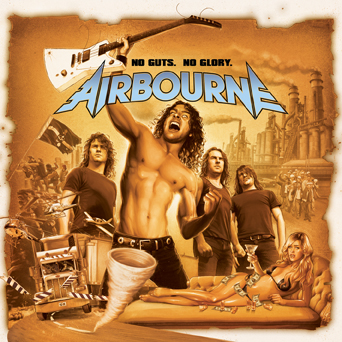 After a stream of seemingly never-ending tours, Airbourne somehow found time to record a monster new album. I can't help but feel like a compelling documentary could be made concerning the kind of odyssey that the writing of this album entailed. More than likely, it was written in dark alleys, road hotels, long bus trips, far out bars and after parties, and in varying states of sobriety.

With Airbourne, comparisons to AC/DC are often made and indeed are easy to make. So don't be disappointed if I lean on one to capture how I feel about "No Guts, No Glory." The album is a lot like "For Those About to Rock," as it followed "Back in Black." It has amazing moments, but lacks a little of the hard-hitting never-say-die teeth-grinding attitude of its predecessor, "Runnin' Wild."

There are a couple of possibilities here, and one of them is more ludicrous than the other. It possible that after the critical reception and relative success of "Runnin' Wild," the band over-thought "No Guts, No Glory" in an attempt to stay fresh and therefore got into territory they weren't as comfortable in. But I find that hard to believe, and I don't know that Airbourne would ever be accused of over-thinking. I mean that in a good way, I promise.

The other more realistic option is that the band is simply out of gas right now, overextending themselves on tour after tour, without proper time to recharge their batteries and clear their minds to focus on a new effort. The "live fast, die young" mentality helped catapult their name into the fore, but that only works until you actually die, literally or in this case figuratively.

Airbourne deserves a lot of credit for not straying from their musical roots, no matter if they've over-thought the execution or not. The central themes and ideals are still bombastic, party-centric and cloaked in low-level hedonism. All the rowdy bravado is still gloriously intact, and that's one of the most important aspects of the album as a whole. End-to-end power chords and consistent percussion add to the simple but effective soundscape that Airbourne wants to create.

"Blonde, Bad and Beautiful" is exactly the type of song that people have come to expect from an Australian band much more concerned with where their next beer is coming from than their emotional index. The same goes for "No Way But the Hard Way," which also invokes easy images of AC/DC's "It's a Long Way to the Top."

With fist-pumping, neck-rocking solid tunes like "Raise the Flag," and album opener "Born to Kill," I can't say that Airbourne is experiencing a sophomore slump. Throw in the speed-at-all-costs "It Ain't Over Till It's Over," and "No Guts, No Glory" has a fair share of crowd pleasers and fan favorites. I just wish some of the middle tunes like "Steel Town" or "Bottom of the Well" had come through with greater force.

"No Guts, No Glory" is worthy of space on your music rack if you're a fan of Airbourne, especially if you already have "Runnin' Wild." The ideas and rhythms and structures are all deliciously present, although a little slower and dare I say, more thoughtful. The album is a success, though perhaps not an unmitigated one. Eerily similar to the Australian idols they so easily emulate though, if you didn't like the first one, you won't like this one, either.