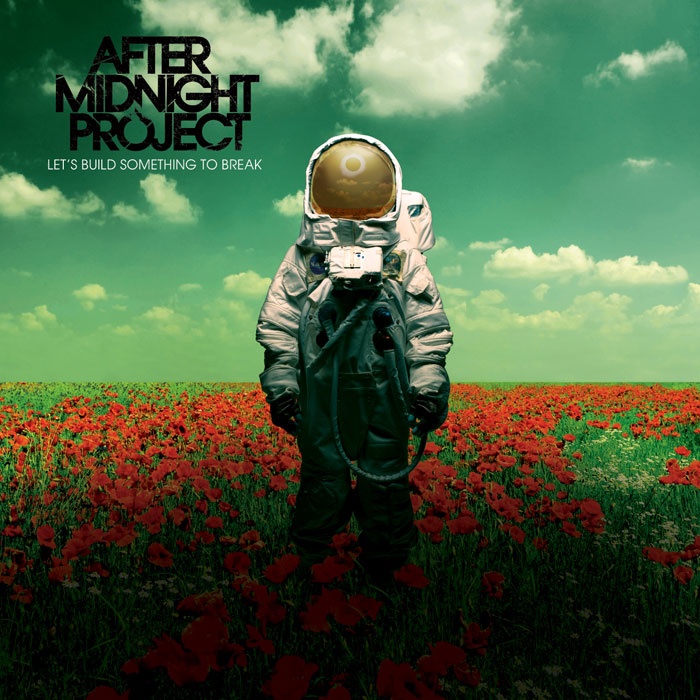 After Midnight Project - "Let's Build Something To Break" Review

So I’ve been keeping my eye on something. In the last six months to a year, there has been considerable movement in the growth of a sect of music on the outside of metal. It consists largely of bands trying to straddle the gap between rock and metal, attempting to create a unique sound while catering to both audiences. Bands like Burn Halo, Black Stone Cherry, The Veer Union, Sick Puppies, Halestorm (who I saw live the other night and was suitably impressed,) and a host of others, are getting some moderate metal billing while maintaining a more solidly rock sound. I can’t yet come up with a term that covers this sub-genre. For the sake of argument, let’s call it “light metal.”

Enter After Midnight Project, who is moving on the periphery of the light metal vein. Signed to Universal Records and associated with John Feldman, producer of Atreyu and the Used, After Midnight Project is trying to get in on the coattails of the bands mentioned above, and become part of the possible wave. Their new album “Let’s Build Something to Break.” is scheduled to hit shelves in July, and the band hopes to utilize the growing popularity of their live performance to drive the album up the charts.

If light metal is to be accepted by the genre as a piece of the puzzle, After Midnight Project may be a casualty of the fight. They display some moderate metal sensibility, particularly on a hard-hitting track like “Scream 4 You.” Beyond that, the band’s punk influences are evident in the album’s best song, “Come On Come On.” The issue is that there are many other tracks on the album, and the shining specks of heavy metal influence sound forced and uncomfortable. While clearly capable of writing and assembling a head-banging, crowd-rocking anthem, After Midnight Project seems much more at home relying on their emotional vocals, and rock mentality. The end result is an album that has a small handful of catchy hook-laden riffs, but is ultimately too dramatic for my taste.

Many of the songs on “Let’s Build Something to Break” fall into the pop-metal formula of sullen/emotional/quiet verse followed closely by loud/brash/unleashed chorus. “Backlit,” “Becoming” and “The Real Thing” all fall into that category. Their current radio single, “Take Me Home,” is also one of the guilty parties, as it eschews the band’s metal capability for a much more pop radio sound. It is in this that they fall much closer to the Used then they do to Atreyu, never mind metal.

There are, as I mentioned, quality hook riffs here. Just when it seems like After Midnight Project is on a path totally tangential to metal, the albums hits back with a glimmer of something like “Scream 4 You,” or “Criminal.” Ultimately though, these are the only anchors connecting the band to the light metal scene, which in itself still exists in the penumbra of metal. If After Midnight Project is to continue stressing songs like “Take Me Home,” they may never successfully climb their way into metal consideration. That’s not to say they’re a bunch of no-talent hacks and they should be ashamed of themselves. They just might want to consider what genre they really aim to be a part of, and focus their energies in that direction.

So is light metal worth the attention? Too soon to tell, the jury is still out. I get the impression that light metal might be the precursor to something more, like the Guns N Roses before Nirvana. I have a hard time believing that it will ever replace speed metal/heavy metal/death metal in my heart or the hearts of metalheads everywhere. Still, there are success stories of bands who have appealed to both rock and metal (Queens of the Stone Age and Monster Magnet come to mind, Halestorm seems on their way,) so the sub-genre has the capacity to leave us with a few happy memories. In the end though, I don’t think “Let’s Build Something to Break” gives After Midnight Project the chops to do that kind of genre-bending.