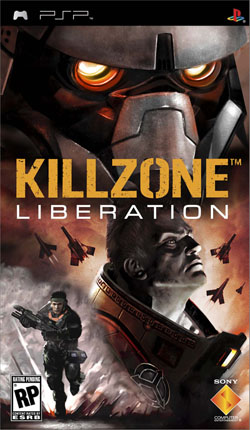 A Bit behind the times...

When it comes to video games, I'm normally a day late and a dollar short. I have a hard time paying a full $40-$60 for a new game. I just lack the attention span to justify that much money when I know I'm going to play it heavy for a couple days, then forget about it. (See: Super Mario Galaxy)

In that same vein, I picked up a PSP a few months back. It was the best thing since sliced bread for about two months, then it started collecting dust on the night stand. Solid hardware, sure. I just have the attention span of a gnat. So, normally when I pick up a game, it's been out for quite awhile. Such is the case with this one: Killzone Liberation.

I'm normally not one for shooters, but I'm a sucker for the top down isometric action game. A long time Diablo and Dungeon Siege junkie, I can spend hours running about whacking crates, no problem. With Killzone Liberation, you get much the same except this time with guns! On top of that, it's a little more involved than the straight run & gun of Diablo and it's ilk as well.

What keeps this one entertaining for me is the idea of running missions, and having certain objectives to achieve. Granted, it is a bit linear, but when you're running about ducking behind barriers taking potshots at Darth Vader wanna be's, it's good fun that's a step above mindless.

Like I said, I'm a day late and a dollar short on video games, so this one's been out there for awhile. If you're new to the PSP fold, check it out. It'll help make your time on the shitter that much more enjoyable.