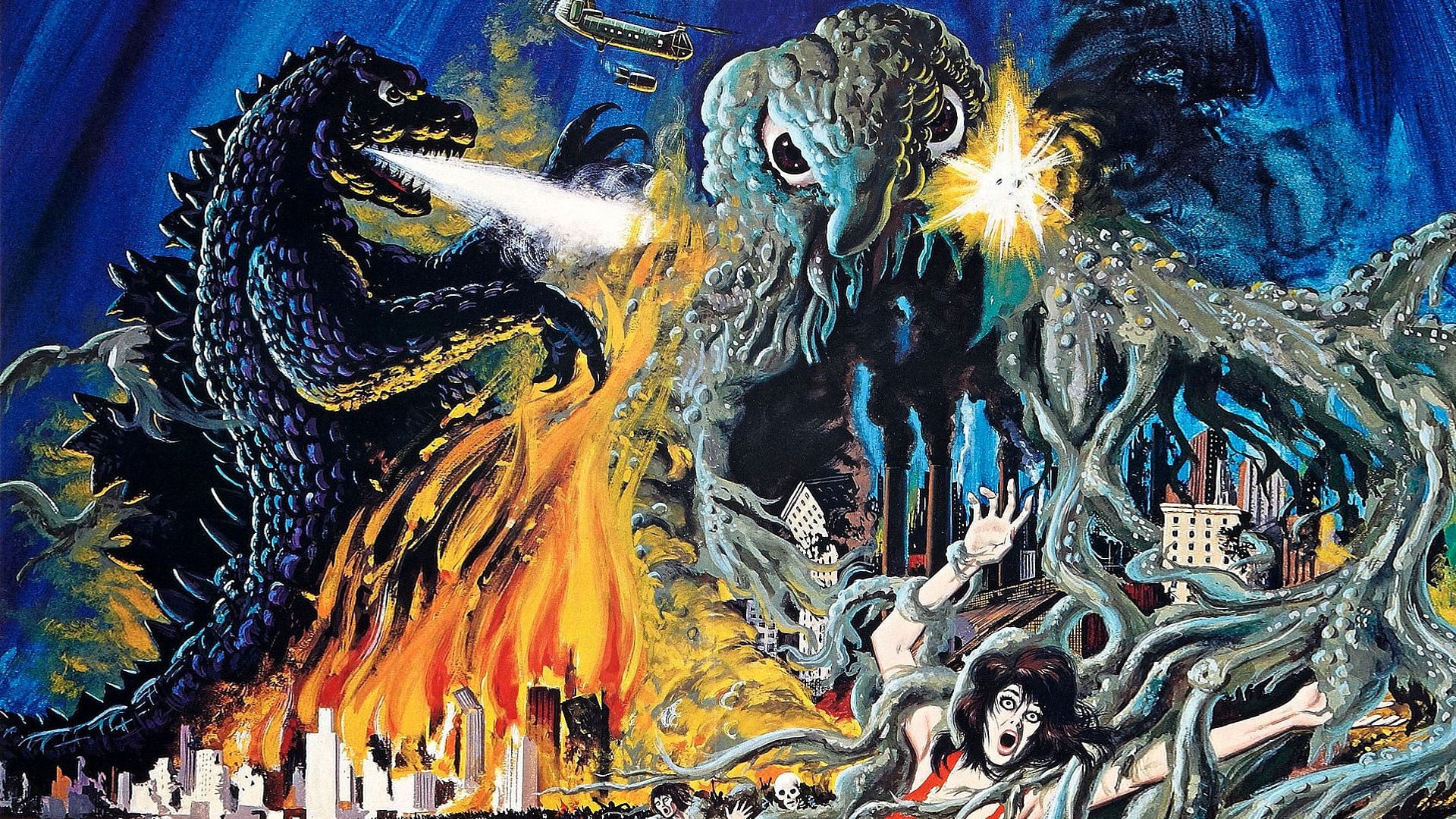 A Beginner's Guide to Kaiju: Part 2

With the release of Godzilla: King of the Monsters, Andrew, BGH's resident expert on all things big and scaly, offers another round of recommendations to burgeoning Kaiju heads.

So you've made it through some of our Kaiju movie recommendations and you really want to dive into the more culturally rich entries? Then this wave of the Kaiju invasion is for you. We're diving into the classiest, most bizzare, and downright obscure entries into the world of Kaiju-ega.

For the Film Snob

Gojira: The film that started it all, Gojira is essential viewing; especially if your only idea of a Godzilla movie is rubber suits and cheesiness. Ishirō Honda’s 1954 film is a haunting meditation on the horrors of nuclear devastation, anchored by a heartbreaking love story. Intelligent, thoughtful, and morose this is a film everyone needs to see. The American version, Godzilla: King of The Monsters, is a well made edit but it lacks the true bite and apparent sadness in the original Japanese version.

Shin Godzilla: The latest live-action Godzilla movie from Japan, Shin Godzilla is a completely new version of the creature. Unlike any other Japanese Godzilla film, Shin is a complete reboot, depicting the first appearance of Godzilla within its contemporary setting. The rules of Godzilla that you think you know are thrown out the window as the film favors disaster movie tropes including extended sequences of government bureaucracy and the inner workings of the Japanese political system. Expect to completely lose track of what department characters belong to as the film rapidly switches between large boardrooms filled with debating politicians. Whereas the original Gojira focused on the nuclear bombing of Hiroshima and Nagasaki, Shin Godzilla relates its disaster to the 2011 Tsunami.

Daimajin: This unique, period piece Kaiju movie from the Daiei studio is set in feudal Japan. It focuses on a group of downtrodden peasants who are under the boot of a cruel leader. They pray to Daimajin, the god of their mountain, and he eventually comes to life in order to enact vengeance. Daimajin is an outstanding film with excellent performances and impactful action. Once Daimajin emerges he becomes a true force of nature. Imagine Jason Voorhees but made of solid stone and fifty feet tall. He strikes out his revenge in a brutal, horrifying manner.

Diagoro vs. Goliath: Oh boy, this is certainly a movie. No other Kaiju movie has a monster using an outhouse. The film centers on Diagoro, the son of a monster that attacked Japan many years ago. That monster dies, leaving Diagoro in the care of a friendly inventor on an island. Conflict arises when the public becomes incensed that their tax dollars are being used to fund the creature’s meals. Diagoro however proves his worth when an evil monster named Goliath shows up. Diagoro vs. Goliath tackles some unique ideas and is quite bizarre. Well worth seeking out on your path to Kaiju Expert.

Colossal: A magnificent drama about alcoholism and abusive relationships. Oh, and giant monsters appear. This is definitely an unconventional Kaiju film as the monster stuff is not the major focus. Gloria (Anne Hathaway) goes back to her hometown after breaking up with her boyfriend and subsequently dealing with her substance abuse problems. However, the only job she can get is at the local bar owned by an old friend (Jason Sudeikis). One night, when walking through a sandbox, a monster appears in Seoul, Korea. It turns out whatever movement and actions she does while inside the sandbox are recreated by the monster. There are plenty of twists and turns, amazing performances, and a fascinating plot, making Colossal of the best movies in the past few years.

Pulgasari: This is a North Korean Kaiju film, that is more noteworthy for its production history rather than its merit as a film. Dictator Kim Jong-Il was apparently a big fan of giant monster movies, and in order to make one for himself, and to improve North Korea's film output, he kidnapped director Shin Sang-Ok and actress Choi Eun-hee. Shin Sang-Ok directed this film whilst in captivity, which makes the plot about a group of villagers teaming up with a giant metal eating monster to defeat an evil dictator pretty subversive. The film was later remade in America under the title, The Legend of Galgameth. While the background behind the film is much more interesting than the movie itself, it remains a fascinating cultural artifact for genre fans to track down.

Godzilla vs. Hedorah: This is the weirdest of the Godzilla franchise by a long shot. This environmentally conscious film mixes animation sequences with live-action and a vibrant colour palette. The weirdest scene features characters in a club, drinking and having a good time. Suddenly everyone becomes fish people, with weird fish masks on their head as they dance. Clearly the scene is featuring someone who has just done some hefty hallucinogens, and I wouldn't be surprised if director Yoshimitsu Banno imbibed a bit in psychedelics himself before making this movie. Series producer Tomoyuki Tanaka was not happy with Godzilla vs. Hedorah, however history shows that this movie is a pleasant departure from a franchise that can at times, feel very repetitive. Come for the Smog Monster, stay for Godzilla flying.

Gamera: Super Monster: The final Gamera film in the showa era, and you'd be hard pressed to call it a new Gamera film, given that there were a sum total of about five minutes of new Gamera footage. The rest is a mixture of stock footage, and a super hero show. There are Three Super Women who are in a great battle against another evil Super Woman. Throw in a few segments of random anime, and you have one confusing movie. This is probably the most efficient and creative use of stock footage in any Kaiju movie. If you hadn't see any of the other films you'd still be able to comprehend the plot. Gamera: Super Monster is not a good movie, but damn if it isn't a weird one.

Godzilla (1977): Better known as Cozzilla, this is an italian re-edit of the original Godzilla. Director Luigi Cozzi used a process called Spectrorama 70 to somewhat colorize the Japanese classic. I say somewhat colorize because the process basically throws color gels on top of the black and white footage. As such you'll get bizarre splashes of color that will sometimes enhance the mood of the scene, such as a deep red during Godzilla's rampage, and others which seem completely out of place. On top of the weird trippy colour palette we get scenes from real WW2 documentaries and other monster movies spliced into Godzilla's rampage. The filmmakers also borrowed segments from the Americanized Godzilla: King Of The Monsters making the whole production part Italian, part American, part Japanese, and all unsettling.

A man by the name of Geno Cuddy recently did his independent restoration of the film, using one of the only remaining 35mm prints. The restoration is well done, and well worth checking out if you haven't seen it. Fair warning, some of the footage inter-spliced is of real horrors pulled from WW2 newsreel footage. A similar warning should be noted if you're someone who has any experience in epilepsy due to the film’s frantic editing and colour splashes. Cozzilla is recommended for someone who has seen the original, and the King Of The Monsters cut, as you can really spot the differences. After viewing these versions countless times, I was left with a severe sense of dread and felt truly horrified following Cozzi's iteration.

The world of Kaiju is expansive. This is just a brief overview to get you started on your journey. The sheer creativity on display of these films will dazzle people of all generations and hopefully that creativity shall continue to shine for years to come.