8-Bit Fatalities Strip Me of My Innocence

This is a bit of old news (in Internet time), but I thought it was well worth sharing for those of you that missed its first runaround. Fascinated by the pre-Mortal Kombat days of gaming, flickr user Steven Lefcort (tastypaints.com) materialized what he had always imagined when he was offing baddies in the innocent 8-bit days.

Welcome to my new project: 8-Bit Fatalities. The idea behind the project stems from growing up at an arcade, and my eventual love affair with Mortal Kombat.

Before Mortal Kombat, violence in video games was largely unheard of or ignored because of its extreme pixelized simplicity. But when Liu Kang and Sub Zero came along to finish off arcade goers the world changed and parents were in an uproar (not mine though). 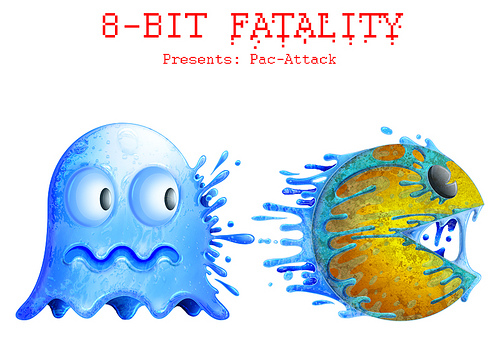 I couldn't understand what the big deal was though, because as a videogame player all my life I had already considered my actions life and death. Just because you didn't see pac-man violently tearing into the ghosts with his jaws, or mario smashing in the brains of a goomba, thats what I knew was happening. I knew my goal was to kill these enemies, so Mortal Kombat wasn't a big change for me. To me, it was still just a game, where fake deaths happened as part of game progression. To uninformed adults, however, Mortal Kombat was a photo realistic depiction of kids becoming complicit in virtual murders. And so, I decided to show everyone just what I imagined was happening when these little blocky, pixelized abstractions did when they came into contact with eachother, but in a much more visceral, and gory way than could ever be shown with limited graphical systems.

Today, we get to see what happens when an over zealous blue ghost tries to bite off more than he can chew. A powered up pac-man was not staying inside his ectoplasmic stomach for long.

For more gory fun, check out "8 Bit Fatalities" on flickr.