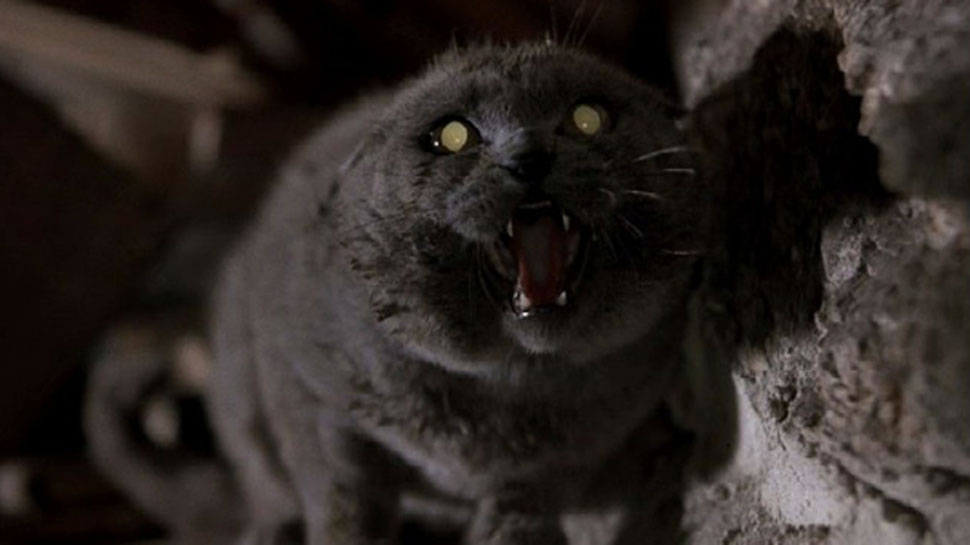 There are few horror tropes quite as prevalent as the cat scare, but with such an abundance of fearsome felines, the question remains what is the greatest horror movie cat scare? In no particular order here are some worthwhile contenders for the number one spot.

In Ridely Scott's haunted house in space the cat isn't just a jump scare but enriches the thematic atmosphere. The brilliance of Harry Dean Stanton's demise here is that the cat acts almost as an audience surrogate. The rearing up, and the hiss are tantamount to the viewer yelling “LOOK BEHIND YOU”. However, once the horrible murder begins, all we and Jonesy do is watch. The other essential element of the scene is the way the shadows and darkness contrast with the Jonesy's orange fur. Artistic and terrifying.

Ah, Dario Argento the Giallo king. Whether they serve as a man's meal in The Bird With The Crystal Plumage or find themselves trapped in a wall like in Two Evil Eyes he has a troubled relationship with cats to say the least. Hell, even in Inferno, the movie containing this cat scare, he has an old man drown a bag of cats. Inferno features a poor woman being pelted with cats from all directions, I kid you not this woman is clearly just getting cats thrown onto her off screen. This is a scene that makes you pity both the actress, and the poor cats being thrown upon her. They fall from the roof, jump at her from the ground, and just ruin her day in all regards. The scene ends when a mystery person raises a knife and kills her. Was this the man throwing cats at her? Does he just have a backpack full of squirming cats to throw at unsuspecting victims? We may never know.

Okay so this one may be cheating, as there are no cat scares in Terminator, but there is a substitute an iguana scare. This one involves Sarah Connor's pet iguana, an animal so important to the Terminator Timeline it has its own wikipedia page. Pugsley (the iguana's name) is set up to be a very apt escape artist, something that anyone who has ever had an interaction with an iguana would immediately deem suspect. So as soon as Ginger (Sarah's roommate) opens up a cupboard in their kitchen the iguana jumps out scaring the audience. This leads to many questions:

1. HOW DID AN IGUANA CLOSE A CUPBOARD DOOR?

2. HOW DID IT CLIMB INTO THE CUPBOARD?

3. WHY DON'T THEY IMMEDIATELY START WASHING DISHES AS SOON AS YOU DISCOVER THAT AN IGUANA HAS BEEN IN YOUR CUPBOARD?

There is an answer to the first two questions, the iguana is in fact.....an early Terminator model sent by Skynet who has secret abilities. Either that or it's just an extremely poorly thought out jump scare that makes no sense. You decide.

Tales From The Darkside:The Movie

Stephen King is another horror luminary who seems to have some unexplored issues with cats. The sheer amount of evil cats in his work is rather remarkable. However the sheer amount of horror media done by Mr. King is likewise an impressive list. Classics like Pet Sematary, to lesser films like Sleepwalkers all manage to weave in creepy cats. The absolute greatest and most disturbing cat from Stephen King's oeuvre is without a doubt The Cat From Hell, adapted to the screen in 1990's Tales From The Darkside: The Movie. This tale features an old man hiring a hitman to kill a cat for him and, well, lets just say the cat is a little more than the hitman can handle. In a disturbing, frightening, and unforgettable scne we see this vile feline sneak into the hitman's room while he is asleep and crawling down his throat killing him. The scene is effective but even more disturbing is what happens when the body is discovered. The cat can be seen moving around inside of the body and eventually bursts out the way it came in. It'll make you think twice before allowing your cute little seemingly innocent kitty back on the bed.

There's Nothing Out There

This 1991 horror film by Troma studios predates Scream, and has a main character that feels right at home with the self aware trend of the 90's. The film tackles a variety of horror tropes including the presence of a creepy cat. This film goes a step further than some horror films by having the main character understand the twisted logic of the horror genre. "Where did it come from? There's nothing here but ceiling! I love how these animals just fall out of nowhere, right into your hands. What do they do, just hang up there by their claws and wait for people to pass by?" . That's a quote that sums up the entire notion of the cat scare.

The movie Hausu isn't necessarily scary but it is extremely weird and unsettling. One of the main features of this near indescribable film is a large fluffy white cat who acts as the earthly connection for the main villain. I guess...it's not really explained. But when the cat dies at the end of the movie by getting kicked by a pair of disembodied karate legs a painting of the villain disappears (this is nowhere close to being a spoiler as I just told you pretty much the only cause and effect scene of the movie). There are too many spectacular scenes to pick one that can be singled out as the best creepy cat scene. There's the odd, haphazard montage of the cat running down a piano, the creepy cat painting, and much much more. If you're looking for an insanely weird film, than boy oh boy is Hausu the film for you.