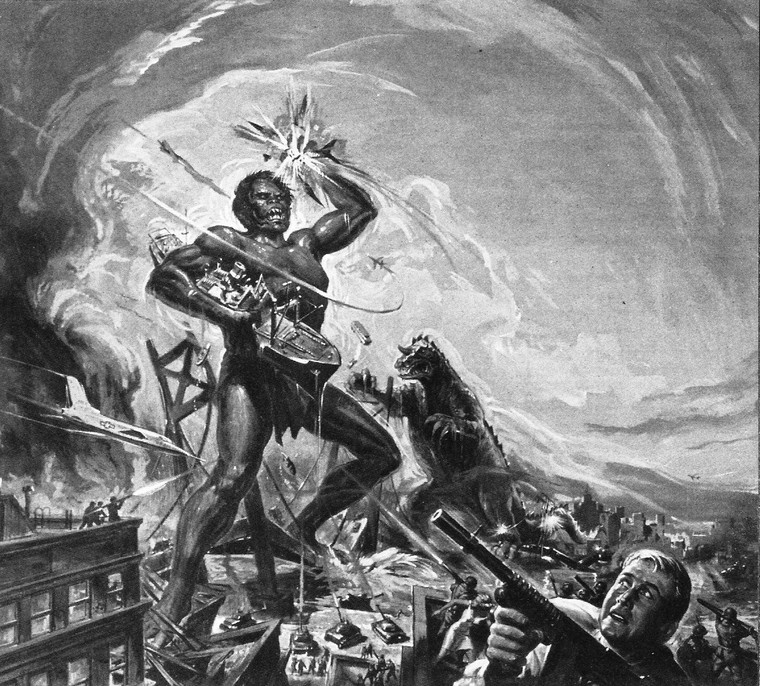 In the modern era of remakes, Japense horror movies for American audiences are extremely commonplace while there is little talk about the opposite. Here is a list of American films and monsters being re-contextualized for a Japanese audience.

This is the only film in this list that is a direct remake of an earlier film, and not really a horror movie persay, but it has ghosts. This remake includes everything from the original film...except for Patrick Swayze. However there is a twist this time, as it is the female who gets murdered early in the film, and she must save her husband from meeting the same fate. We still get our pottery scene however, so it doesn't distance itself too far from its source material. A Japanese Ghost remake swapped genders 6 years before America did the same thing with Ghostbusters.

Before Toho gained the rights to make an official King Kong movie there were two unofficial uses of the monster made in 1933, and 1938 however both Wasei Kingu Kongu (a short comedy silent film), and King Kong Appears in Edo (a two part period piece) are now considered lost films. The two official Japanese King Kong films both have an interesting production history. Both are made by Toho Studios the team behind Godzilla, however King Kong's original opponent was supposed to be another famous movie creature, Frankenstein's Monster. However, Toho decided to change the script to have King Kong fight Godzilla. Elements of the original King Kong vs. Prometheus script are still apparent in King Kong Vs. Godzilla as Kong somehow gets his power from Electricity. King Kong Escapes is actually an adaptation of an American animated series called The King Kong Show that was occurring in America. It is an co-production of Toho and Rankin/Bass, and Mechani-Kong predates the more famous MechaGodzilla. Toho wanted King Kong for one other film, but unfortunately lost the rights. The films script was already written so the film Ebirah, Horror of the Deep has Godzilla behaving more like King Kong, than the reptile we know and love. It is unfortunate as King Kong could have had a run in with Toho's other famous monster Mothra, who appears near the end of the film.

Frankenstein Conquers the World, The War of The Gargantuas, Zyuranger, and Frankenstein Girl Vs. Vampire Girl

Frankenstein has appeared in plenty of Japanese films, so much so that the variety of Godzilla films when brought to Germany are re-titled to include “Frankenstein” in the title, even if the titular monster never appears within it. Starting with Frankenstein Conquers the World which has the heart of Frankenstein's monster arriving in Hiroshima and getting nuked. The radiation turns the heart into a small boy who quickly begins to grow in size eventually reaching Kaiju size. He battles a fearsome monster named Baragon, with the film ending as both monsters get sucked into the earth. War Of The Gargantuas is a direct sequel to Conquers the world, as both of the titular Gargantuas are said to have been created from the cells of the Frankenstein's Monster. The monster would appear again in Zyuranger, the sentai show in which Mighty Morphin Power Rangers used footage from. In this iteration we have a very classic version of Frankenstein's Monster with a design right out of the creatures origins. That is until he takes the bolts out of his neck, using them as weapons, in the Japanese version the monster turns into another form, but Mighty Morphin Power Rangers uses the design to be an entirely different creature named Mutitus. The final mention of the monster is Frankenstein Girl Vs. Vampire Girl which just features a teenage vampire, duking it out with a teenage reanimated corpse created in a manner similar to the original Frankenstein. It is a ridiculous over the top action film, that only lightly touches on the Frankenstein story with the inclusions of a mad scientist, and an assistant named Igor.

Another Toho film this one is surprisingly without giant monsters, and is instead an attempt to ape Hammer Horror's style. Whilst the films use “Dracula” in their title, he only appears in a brief flashback in Lake of Dracula, and is entirely absent in Evil Of Dracula. The flashback in Lake Of Dracula has a weird retcon to the vampire mythos, as it reveals an old man is a relative of Dracula, but is not himself a vampire, instead it is his son who becomes the vampire implying vampirism skips a generation.

Invisible Man Appears is a Japanese film made in 1949, and is considered the first "major" Japanese Science Fiction Film. Invisible Man Appears apes the trademark look of the Universal Invisible Man films, featuring the same bandage, and trenchcoat look. It has a complicated plot, with a lot of characters vying for the formula.  Transparent Man is a Toho film released in the same year as the original Godzilla this was meant to be a loose adaptation of HG Well's novel The Invisible Man, although the two works do not have much in common. Transparent Man features multiple people gaining the power of invisibility through a formula developed during World War 2. Our hero is a clown who must stop an evil gang using the formula to wreak havoc. The film has never officially been released in America. Both Invisible Man films feature effect work done by the legendary Eiji Tsuburaya.