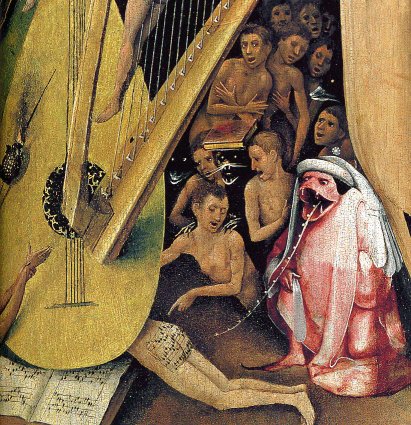 The screen goes up, the headphones on, ITunes open, hit shuffle, then unwrap Firefox, Chrome, or Safari and you’re off. The soundtrack for your daily bill paying, gaming, or noodling session online is whatever Apple’s ‘random’ algorithm decides that it will be. The preceding scenario describes the general way in which most people I know, who aren’t exercising, connect with music these days. And truthfully, I too love to have a score to alleviate the monotony of tasks most dull, but I remember a time when the music was the event.

Most of the songs that stir me to this day were heard in the confines of my room when I had nothing else at hand, just the world that was being hatched within my head by the vibrations dancing through my Eustachian tubes. Invariably, the most memorable of these solitary listening experiences were when the music spoke to dark impulses. At times listening to this kind of music in a lightless room felt like communing with the dark lord on a rain swept reprobate’s playground. More on the Dark Lord in a moment. The songs listed below don’t require a dark room and good headphones to make an impact, but you will almost certainly be more anxiety riddled if you listen to them that way.

My momma taught me two things, yes, just two. One, don’t investigate rustling bushes when visiting a nude beach. Two, never talk after people who are smarter than you. Both sound tips, the second one I am putting into practice right now. Bloodygoodhorror’s resident musical expert Drew has been kind enough to help me put together this week’s lists as well as to provide a short history of the of Devil's hand in the music world…

While it's easy to say that shock value in music came to the fore with the pelvic gyrations and African-American-influenced stylings of Elvis Presley, shocking music existed well before The King. Prior to that was the figurative godfather of American blues, Robert Johnson, a man whose music was so feared by the majority that the rumors he sold his soul to Satan to learn the blues became eminently believable.

Yet, the history of disquieting songs is much more involved than the simple and relatively recent story of musical shock value. To truly trace the unsettling side of music to its genesis, we must dig father back in time, traveling as far into days gone by as the early Middle Ages. This is where the tritone was first noted as a dissonance on the musical scale, and by the end of the Renaissance, this singular, unstable three-tone interval in notation had picked up the nickname "Diabolus in Musica" (not just a Slayer album, kids!) or, in common English, the "Devil in Music."

Eventually connoting the idea of unease or impending evil, the so-called "Devil's Chord" had been all but written off by Renaissance composers, as it contained an untenable association with the devil and other generic, brooding evils. The Church at the time was so offended by the oppressive nature of the chord that it outright forbid the use of tritones in composition. It wasn't until the Baroque period (1600-1750,) that the concept of intentional dissonance in music underwent more than cursory exploration. With the coming of the Baroque, most famously exemplified by Johann Sebastian Bach, the idea that music could be more ornate and interlaced with differing themes became more prevalent. While experimenting with the idea of chromatic scaling, Baroque composers also began to at least dip their toe into the pool of the diminished fifth and other tritones, though they, and Classical composers after them, used them in specific fashion solely to illustrate either tonality or a limited, single concept.

Eventually, the Romantic era began, and composers such as the Hungarian master Franz Liszt began to incorporate the tritone with greater aplomb, though it always remained a harbinger of foul tidings or the devil himself in music. While the Devil's Chord has since been dissected, analyzed and effectively disarmed in classical music in the 20th century and beyond, the diminished fifth has anything but vanished in popular music.

George Harrison famously employed the interval for several different Beatles' songs, but the most recognizable application in popular music is undoubtedly the iconic, breakthrough single by Black Sabbath, "Black Sabbath." Tony Iommi has admitted to intentionally seeking out a use for tritones in that song as a way to make it sound more "evil" and "doomy." From that jumping off point, metal bands and musicians of all stripes have sought out the singular unease, disquiet and unsettling, discordant nature of the tritone interval to make their songs seem brooding, fevered or intense.

Since the discovery and classification of the Devil's Chord, other methods of instilling smoldering creepiness into music have been developed and asserted. That said, the tritone will always be the dark spiritual ancestor of those songs and those ideals.

*Note: You might notice that there are youtube clips embedded above each write up, these are not music videos just still images with the songs running under them. The directions are as follows: click on the link, turn off your monitor, lay in the dark and enjoy. When the song finishes, repeat with the next link and so on. Just trust us, its the best way to enjoy these songs.*

It's easy to talk about this song in hindsight as being prophetic of Layne Staley's desperate, lonely death. What chills me about it is not its significance after the fact, but rather its prophetic nature at the time of release. The entire "Dirt" album is one long user's manual to heroin addiction and the pitfalls of that irrevocably life-destroying drug, but the title track in particular takes on an extra haunting tone because Layne sings it as though the rest of the world has fallen away; this is his grand soliloquy, spoken in thin metaphor. There is an argument to be made that the song wouldn't carry such import if Layne were still alive, but I think the biggest part of the quiet power of "Dirt" is that Layne's life couldn't have ended any other way. He told us nine years in advance how he was going to die, but the rest of us didn't believe it until after it happened.

When I first heard this song as a lad of no more than ten years old, my gast was successfully flabbered by the sheer force of the song. Drop C tuning in itself isn't altogether uncommon, but in this case it was less for show and more a distinct part of the storytelling. This plodding, brooding, downright unsettling piece of grunge and heavy metal craftsmanship is concurrently both loose and vectored. The odd harmony that Chris Cornell strikes with himself in the dual vocal tracking only lends the tune another layer of discordant energy, suggesting that the storyteller is speaking evenly, but his mind is screaming at him relentlessly. While probably heavy handed in its symbolism, the lyric "Down in the hole / Jesus tries to crack a smile / Beneath another shovel load" has always dug under my skin.

This back-half track on Megadeth's iconic "Rust in Peace" is nearly a throwaway; a simple lead in to the album's title track that promises much more sonic fury. Yet, Dave Ellefson's gripping, hook laden bass lead turns this into a track that can't be ignored. His unusual, unique double-hammer double-pull technique gives this song a decidedly unnatural feel, with a rolling undulation not typical of heavy metal of Megadeth. Dave Mustaine is typically an awful vocalist and mediocre lyricist, but in this case both work to his advantage, as his tenor grumbling is uneasy and resigned. His lyrics cast an easy vision of a blasted wasteland where these patrols protect the few scraps that are worth protecting. Immediate questions come to mind, as the listener wonders what happened that these patrols became necessary, and what terrible mutated thing are they protecting their charge from? The final lyrical lines coupled with Ellefson's haunting riff give an image of the dawn patrol marching on into the morning, swirling toxic dust clouds obscuring their past tracks and uncertain future.

Dead Kennedys - "This Could be Anywhere"

This song feels like a highly fictionalized account of junior high and high school suburban living, until we realize that we've all known someplace exactly like the place Jello Biafra describes in such despondent detail, and we've all met his protagonist. The Dead Kennedys were once described as "evil surf rock," and East Bay Ray was the centerpiece of that feeling. His inverted, surprisingly gloomy riffs were the backbone for a number of glowering DK songs, including but not limited to the boiling "Riot" (where he had help from Klaus Fluoride) and "Moon Over Marin," which is played with an intentional sickly saccharine sweetness. For this track off of their album "Frankenchrist" (the first album ever put on trial for obscenity charges in the United States,) Ray conjures a recognizable but twisted lead that becomes truly sinister during the breakdowns. Biafra adds to the mix with chilling scene with lyrics reflecting places that seem innocuous, but we all know well. He tells stories of an "empty, plastic, culture slum suburbia," and says that it "takes a scary kind of illness to design a place like this for pay." Amidst this stirring narrative, Biafra creates a number of disturbing but common characters, telling a story of jaded kids bored in a town who take their aggressions out on others, and parents who become shady characters in their own right when faced with their neighbors. Biafra takes the emotion to another level when he rises to a crescendo to describe "the guy who shows off his submachine gun / to his sixteen year old daughter's friends / Whose sense of pride and hope / Is being in the police reserve / This could be anywhere." I don't know about you all, but I've been to the outwardly safe-seeming town that simmers with unease on the inside. What makes this song so worthy of this list is that the conditions described truly could be, and sometimes are, anywhere.

Stay tuned for Tor’s list and 2 picks that made both Drew and Tor want to turn the lights on.