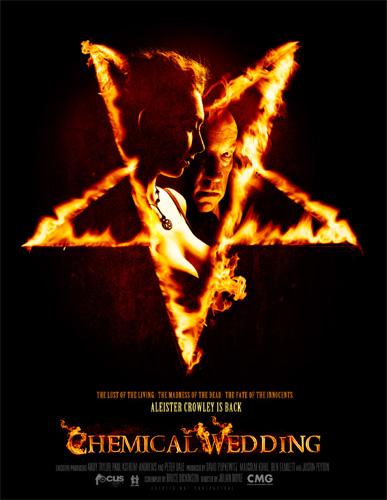 I have loved Iron Maiden since I was a youngster and wasn't too surprised when I read that lead singer Bruce Dickinson was writing a horror movie. Hell their cover art alone should have been turned into a film years ago.

What did surprise me though was how good the film looked after watching its trailer. Not to take anything away from old Bruce but any time a "metal guy" tries to get involved in a horror film it usually ends up coming out a mess. Don't you think for a second I've forgotten about "Monster Dog" Alice Cooper.

Part of the credit for "Chemical Wedding" should also go to long time Monty Python editor Julian Doyle, who co-wrote with Dickinson and directed the film. Between the two of them it looks like they've crafted a pretty interesting story and managed to get a decent budget behind it.

In 1947, noted Satanist Aleister Crowley dies. In Cambridge, 43 years later, with the help of a computer, Crowley's spirit takes over the body of Haddo, a mild-mannered, stuttering don. Over four days, as Crowley prepares for an occult extravaganza, bodies pile up, Crowley's elect engage in rites of passage, and Lia, a red-headed campus reporter, sniffs out a story that puts her in grave danger. Mathers, a scientist recently arrived from Cal Tech, may hold the key to her destiny.

"Chemical Wedding" will be screening next week at the Israeli science fiction and fantasy fan convention which is held annually in the Tel Aviv Cinemateque during the Sukkot holiday. I'm sure most of you will be attending but if you're not you can check out the trailer for the movie below and hopefully we'll get a release date soon.