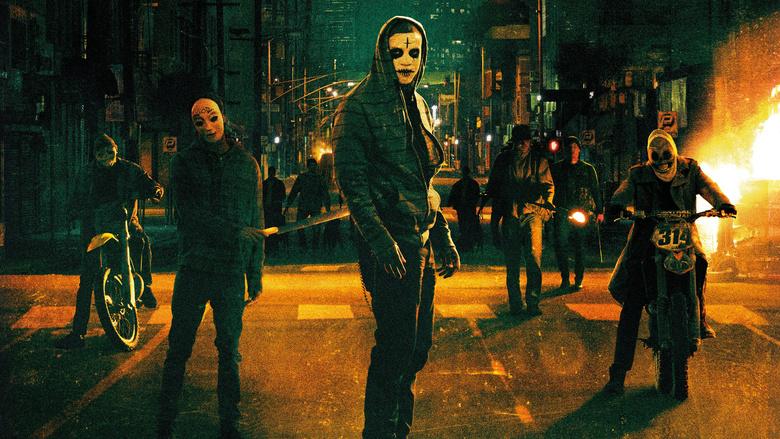 Most horror fans remember the announcement and lead up to last years "The Purge". The majority of horror films that have received a theatrical release in the last few years fell into the torture, possession or remake sub genres. "The Purge" seemed to be a breath of fresh air harkening back to the home invasion genre with a twist of political satire. The film received mixed reviews from critics and even the big guys here at Bloody Good Horror. Overall it was entertaining and contained interesting choices mixed with cliches. It did leave many questions open about the plot of the government's decision to start a purge in the first place. Making $30 million in its opening weekend, it seemed inevitable for a sequel to conjure itself into existence within the next few years. Writer and director James DeMonaco wasted no time in creating the follow up "The Purge: Anarchy" this year. As with any sequel, there is a danger of repeating too much of the same or deviating away completely. "The Purge: Anarchy" while not being groundbreaking, manages to take the concept of mandated murder and throw it into an open city scape, creating a tense and fun ride.

Only a few hours from the annual purge, financially struggling waitress Eva Sanchez, revenge driven Sergeant Leo, and newly split couple Shane and Liz find themselves facing this year with mixed emotions. Leo plans to take his government given right to end the life of a man that destroyed his family. Eva holes up in her apartment with rebellious daughter Zoe and ill father. Shane and Liz travel across the city to break the news of their failed relationship to Shane's sister. However, the couples car is targeted and sabotaged to break down just when the purge commences, leaving them stranded in the city with a rebel group stalking them. Leo runs across Eva and Zoe as they are being kidnapped from their apartment and reluctantly rescues them. Joining Liz and Shane, the group decides to take to the city and do anything to survive the night.

The main strength of "Anarchy" is in the setting. The first Purge film focused on one family in one house surviving invaders. As intense as that can be, the idea of being locked outside on Purge night is even more terrifying. "Anarchy" delivers that fear without any apologies. The scope of the city violence is shown beautifully through random attacks, snipers readying their weapons, and the wealthy buying cattle for the slaughter. The main cast followed all work well together with a notable nod to Frank Grillo as the headlining troubled hero, Sergeant. He delivers a strong and mysterious character that could have easily fallen into talentless action star. With that, the motivations given for the characters choices to not participate in the purge work well and add a point of tension. Thankfully the story includes many different "villains" for the group to run from with creative and honestly chilling effect. Also, the most intriguing aspect about "Anarchy" is in the explanation of the annual purge and its true meaning. The answer is one that opens up the world even more and adds a positive approach to this far fetched set up.

Negatively the film does fall short in terms of consistency. There are many moments of tension and solid character writing, but quickly after those scenes a dud will pop up. Still, this is a negative that shouldn't be completely scoffed. The open city scape needed to have the anarchy shown running rampant and with that came issues in creating a solid streamlined story. DeMonaco managed to maintain tension for most of the film through random attacks and threats from masked killers, but the unfolding of the main groups plan to survive is thin. The third act does run into goofy territory involving an auction for the wealthy that could have been cut out or at least cut down. It almost seems as if that portion was filmed in the last few days of shooting or even added after test screenings. It was rushed and didn't serve the main plot of the story. The political satire and commentary could have been focused on more within that scene, but instead it went for yuppies being crazy like in the last film.

Overall, "The Purge: Anarchy" does not deliver any one scene or concept that will slide it into horror history. However the entire ride is enjoyable and what fans wanted from the concept of an annual purge. One could argue that if this were released as the first movie in the Purge franchise, it would have been a far more talked about film. DeMonaco seems to have taken a stronger grasp on his concept which gives the possibility of a third film more of an air of excitement. If you liked the first Purge film then Anarchy will most likely please with the new direction it takes.