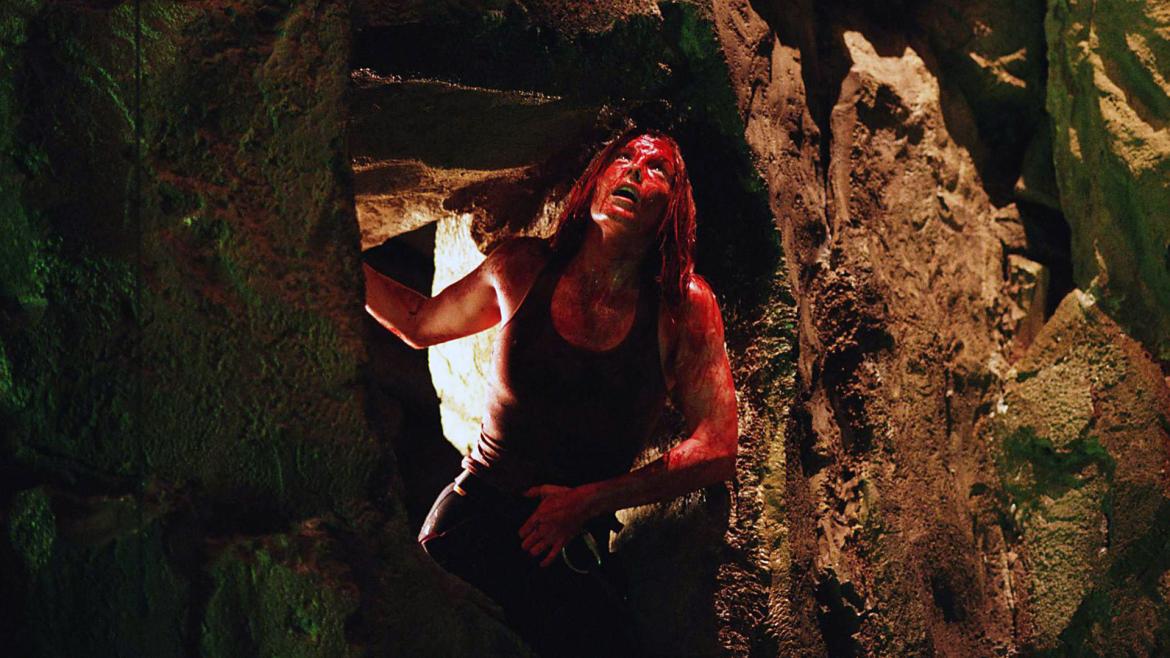 "The Descent," the new film by "Dog Soldiers" director Niel Marshall, centers on a group of young thrill seeking women who get together every year for various "extreme" activities such as cave exploring and mountain climbing. In the opening scene, we witness the tail end of one such gathering, and a tragic accident that befalls one of the women on the way home. One year later, with their interpersonal relationships forever altered as a result of said tragedy, the women reconvene for another outing in an attempt to regain some type of normalcy in their lives.

As the women set out on their journey, so the real film begins. Finally arriving at their destination they rappel into what amounts to a giant hole in the ground and land in a gorgeous underground cavern. Enjoy the peace and tranquility of this scene, because it won't be something that you'll feel again. As the group ventures on things become increasingly precarious. They encounter progressively tighter spaces and longer drops, all tracked wondrously by Marshall's camera work. The feeling of claustrophobia is inescapable in this film. It's the kind of movie that makes you breathe a little deeper just to make sure that you've got enough air.

The spelunker's luck finally runs out when a tiny passage the girl's are traversing collapses, essentially trapping them underground. The turmoil of this scene sets up the next big shock, as one of the women reveals that the hikers aren't in the set of caves that they think they are. That's where I'll stop with the details so as to not ruin anything else, but suffice it to say it's a pretty sure bet that there won't be any rescue teams sent for them. At this point the interpersonal drama starts and becomes the driving force through the rest of the film.

What Marshall has created here is a wonder this day in age. He's come up with an incredibly creative and ambitious idea and executed it almost flawlessly. What could have been a standard horror/actioner with little surprises, instead becomes a deeper character piece thanks to his attention to plot development. Granted, half of the cast (of roughly 6 or so?) are faceless fodder for the second act, but the 2 main characters in particular have very deep personalities. I also enjoyed the international flavor of the cast and the deep human themes that are explored. It's these themes... personal loss, conflict, redemption, fear, the will to survive and the nerve to kill, that drive "The Descent" like a runaway freight train on the wrong side of the tracks. It's a thrill ride from start to finish that never lets up.
The Descent

The movie does run the risk of over-stretching itself about an hour in when the "monsters" are introduced. Up until then it was doing perfectly fine on it's own being suspenseful without any real antagonist. I thought for sure this would be the moment when it would "jump the shark" so to speak, but to my surprise that didn't happen. Instead, the film takes a glorious left turn down "bat-shit-insane" boulevard and throws the viewer a 180 that's sure to excite. Some of the action scenes are breathtaking, particularly one that involves a case of mistaken identity and a sharp metal implement... if you've seen it than you know damn well what I'm talking about.

The cat and mouse game that unfolds between the girls and the underground beasts is riveting to watch. Some of the things they are forced to do to survive are unspeakable. It really makes one reflect on what you would do in the same situation... just pray your conclusions are better than mine (ie crawl into the fetal position and cry). The film is actually very gory, although it doesn't rely on that to shock. I think it could have been as effective without some of the gratuitous blood, although in today's age of "unrated" DVD's I suppose it's a prerequisite. When it's all said and done, you're sure to need a shower and a good night's sleep to shake the memory of what you've just seen.

And yet with all the things it has going for it, it does suffer from a lack of logic which may turn some people off. The decisions made by certain lead characters at key moments can be a bit baffling. Although to be fair, this is a portrayal of serious "Type A" personalities who live for this kind of excitement. As a couch-goer myself, I can't imagine anyone feeling the need to climb deep inside a mountain in the first place, let alone to make some of the other asinine moves some of these women make. At one point, the most eager of the group thinks she sees daylight and so she goes sprinting down a tight and slippery corridor... I'll let you guess what happens next (hint: it involves a bone sticking out of her leg).

The ending may also put off some, at least the real ending anyways. The first "ending" we're shown gave me big time flashbacks of "The Texas Chainsaw Massacre", probably one of the most glorious endings in all of horror cinema. Just when you think everything is alright, they jerk you back to reality and end things in a way that's too open for interpretation for my tastes... although I will say that the creep factor is extremely high.

Regardless, "The Descent" is one of the best films to come out of the horror genre in the last few years. It does a remarkable thing, which is excite and titillate it's audience without the use of torture, nudity or a masked killer. Marshall has taken an incredibly original idea and turned it into a bloody gorgeous piece of cinematic excitement. "Hand over mouth" is probably the position you will sit in for the last hour of this movie, and I can't think of a better endorsement for "The Descent" than that.

The Girl Who Knew Too Much