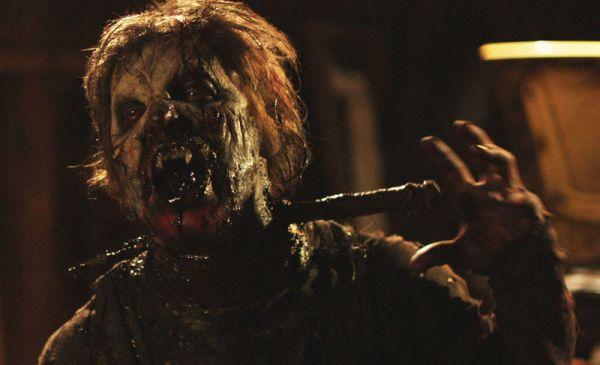 As much as I try not to, I tend to judge screeners on appearance when they get sent to my apartment. I know, I know, that’s not good, but when you see as many movies as I do, you tend to notice patterns. Usually, the better, more professional quality films will get sent in actual DVD cases, have menus and press releases explaining what the film is about. Labors of love shot on weekends in backyards tend to come in jewel cases, but the film-makers will usually include a write up (usually hand-signed) about the film. But then there’s that third subset of screeners. The ones that show up in jewel or slip cases with no information whatsoever, usually on plain white DVDs.

Man, those are the films I dread. So when I opened a plain FedEx envelope today and saw a plain white DVD that said “STAKE LAND” with no additional descriptions, I can’t say I was too excited. When I popped it into my DVD player and realized it was literally a DVR disc without even so much as a menu, I sighed and mentally prepared myself for another “Hide and Go Kill”-esque disaster. Little did I know that the DVR I was watching not only had one of the best vampire films I’ve ever seen on it, but it contained one of the best genre films I’ve ever seen. If you’ve been waiting for the next “Let the Right One In”, it’s “Stake Land”. And it’s not because they both happen to have vampires in them.

I know, that’s a huge comparison to draw. But really, “Stake Land” is a phenomenal film. On the surface though, it might remind you of another film with the suffix “-land”. While traveling with his parents, a young teenager named Martin finds himself broke down and trying to help his parents get their car running in a barn in the middle of the night. After his dog hears something in the woods and runs out to investigate, Martin leaves his parents behind to go track down the family dog. Unfortunately, while Martin’s gone something goes horribly wrong and he rushes back to the barn after hearing the commotion. He’s intercepted by a burly stranger (referred only to as Mister), who has some cryptic words of warning for the youngster. Together, the two go back into the barn to find that Martin’s family has been slaughtered by a vampire (the cool, animalistic undead type and not the lame sparkly ones you see on Trapper Keepers) and, after dispatching the monster, Mister decides to take Martin under his wing, teach him his rules of survival and together seek safety while meeting some strangers along the way.

Yeah, it’s pretty similar to “Zombieland” at a high level. There’s more that happens throughout the film that strengthens this comparison (new characters are told not to go into detail about their history, names are never given, there’s some subtle hinting that Mister and Woody Harrelson’s character Tallahassee share a similar history and there’s a comedic scene reminiscent of one of the more memorable gags in “Zombieland”), but honestly, these films couldn’t be more far apart. While both being incredible films (and I’m not limiting this just to the horror genre), “Stake Land” is an incredibly bleak, moody film that is not a light-hearted romp in any sense. This high-level similarity really doesn’t detract from this film in the slightest. In a way, it almost comes across as a spiritual cousin, similar in overall plot but totally different in execution.

Now, because I think this film is so strong (to the point that my “normie” friends and co-workers will be getting recommendations to sit down with it), I don’t want to synopsize too much. I will say that after this opening scene, we learn that a plague has ravaged the globe, turning those infected into vampiric monsters and bringing about the end of modern society. What’s left are roving bands of survivors, each doing their best to respond to the situation in whichever way they can, some harmoniously and some not. “Stake Land” is a deep film. Without going into too much detail (again, I really don’t want to spoil anything), the entire film serves as a strong metaphor to the current crisis that the Western world finds itself in. The writers expertly crafted a film that works both on a superficial, entertainment-only level that also has a deeper side dealing with issues such as post-9/11 America, religious fundamentalism, the economic crisis and even peak oil. And, most importantly, it’s subtle. It’s there if you’re looking for something deep and want something you can sink your teeth into (yuck yuck!) but if you’re looking for a good vampire flick, you can easily ignore most of these undertones and just enjoy it for entertainment’s sake.

What really puts this film over the top is how masterfully it was shot and filmed. I’ll use that opening sequence I mentioned earlier to illustrate what I mean. When Martin is first in the barn with his parents, they have a small portable radio tuned in. If you’re not paying attention to the radio, you would totally miss that the announcers are talking about establishing hotlines for the missing and warning people not to travel at night and to lock their doors. It’s amazingly subtle. I caught it the second time watching the scene (I was pretty impressed by it), and it’s attention to detail like that that really draws the viewer in and makes this such an impressive film. Even if you don’t actually notice what’s being said, it’s just enough to subconsciously put you at unease. Later on in this sequence, Mister and Martin are searching the barn by the faint light of a flashlight and little things (that I won’t spoil), really crank the tension up and make this opening so effective. There are examples of this throughout the film that add so much to it that it really belongs in that upper-echelon of horror films that transcend the genre and simply become great films.

Up until today, I’ve never heard of this film. However, now that I’ve seen it, I have to say that “Stake Land” belongs on every horror fan's radar. Scratch that, every film buff’s radar. The cinematography is striking. The atmosphere is dark, moody and will make you feel as if you’re traveling along with these characters through the post-apocalyptic world in which they live. The plot is engrossing, perfectly paced and will make you think. And, most importantly, this film will hit you. Hard. It’s a bleak, dark film that pulls no punches, but it’s one that I won’t be forgetting anytime soon. Do yourself right, see this movie.