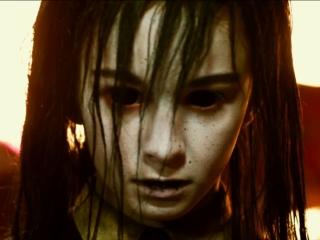 It's been six years since the original "Silent Hill" film hit theaters, a film that at the time I remember thinking was fairly solid. I remember it being visually striking, but falling apart in the end due to a series of bizarrely video-game like info dumps in the third act. Intentional or not, it sort of hobbles a film that otherwise could have ended up being a classic. I remember thinking that if there was one thing I would have liked to see in a sequel it would be a more streamlined story. Well, I've just seen "Silent Hill: Revelation 3D" and can now say, they did not take my advice.

Taking the confounding tact of hewing extremely close to the material from the original film, given it came out so long ago, "Revelation" follows a now teenaged Sharon (Heather) as she runs from unseen forces. Her father has kept her on the run the entire time since the events of the first film, never fully explaining the truth to her, that the cult featured in the first film wants her to return to the town of Silent Hill. They need her because she is the vessel for a part of Alessa's soul, the immolated child turned all-powerful demon that is torturing the cult and preventing them from leaving Silent Hill. Do not try and make sense of that, I typed it and I have no idea what any of it means.

They manage to lure her back by kidnapping her father, and she returns to Silent Hill to try and unwrap the mystery. Once there, she runs into many of the monsters familiar to fans of the last movie and the series of games. You've got good old Pyramid head, the faceless nurses, and a particularly inspired creature design of a spider made entirely out of animated mannequin parts.

As far as the visual style, "Revelations" does many of the things right that the first film also did. Silent Hill is still the creepy, ash-strewn wasteland it has always been. It can still be frightening when the air raid siren signals the return of "the darkness", and the creatures still have the ability to scare. The problem is, there just isn't enough of the things that make this series interesting.

What there is a lot of, unfortunately, is information. It's baffling that they would choose to continue the story of the original film, given both how long its been and the general consensus that the story was the weakest part of the original entry. Even by choosing to go that way, there is no excuse for lingering on the confusing, and frankly silly details of the Heather/Alyssa character and her relation to the Silent Hill cult. You have a series with fiction that is literally built for anthology-like storytelling, and the opportunity is entirely wasted.

What I wanted out of "Silent Hill: Revelation 3D" was some nice, Halloween-time spooky action. What I got instead was a lot of maudlin melodrama that serves to drag the entire film down. You have to feel bad for Carrie Anne Moss here, she probably figured no one would recognize her under the makeup. And even Malcom Macdowell's required cameo doesn't excite quite as much as it should.

Die-hard fans of the games might appreciate the fairly neat final scene, and its allusions to certain characters they're familiar with from that series. It's the only moment where the filmmakers really seem to capitalize on the shape-shifting, immortal qualities of the town of Silent Hill. Otherwise all we get is a continuation of the mess that is the first film's narrative. Maybe they're handicapped by the series' fiction, after all it has always been the arguably "lesser" of the two big horror game franchises. If that's the case, let's hope they strike out on their own for the next entry, if that ever even happens. Right now, the outlook is not good.

The Curse of Audrey Earnshaw