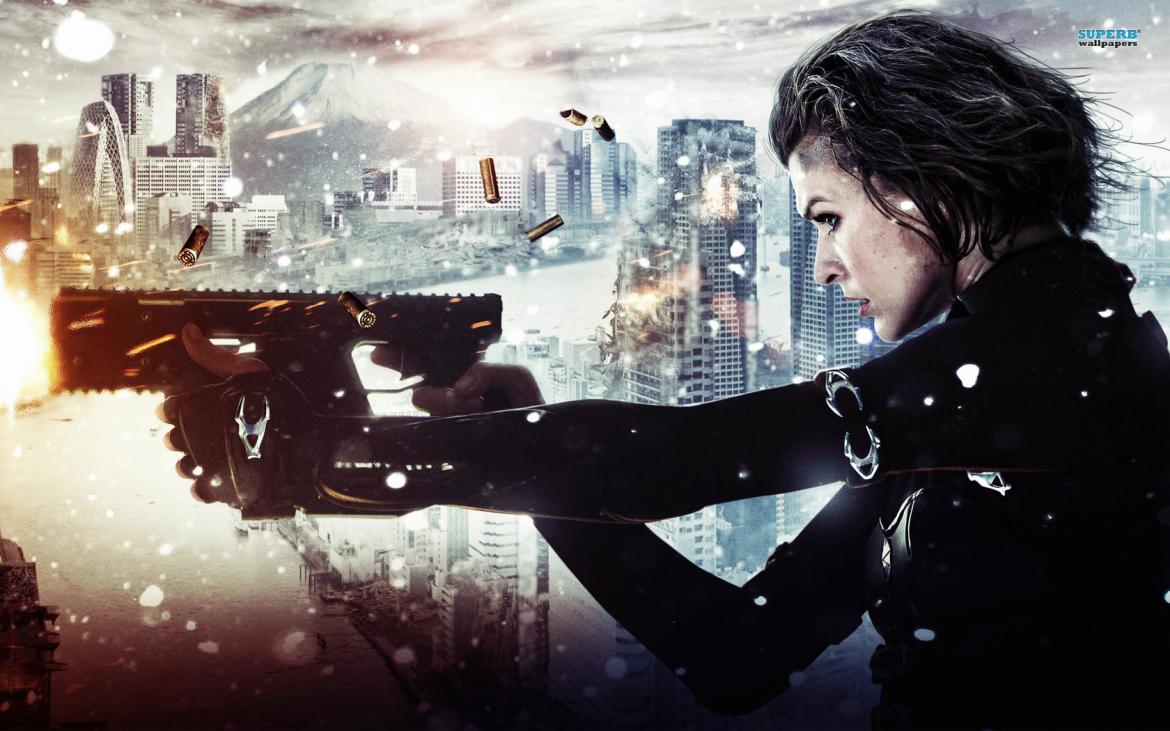 I've always looked at Paul W.S. Anderson as a bit of an idiot-savant, a child using filmmaking tools that he didn't quite understand, every once in a while striking on something good accidentally. This was especially true of the last "Resident Evil" film, "Afterlife", the first he'd directed since the original. It's a glorious mess of three-dimensional fan-boy masturbation, the culmination of which is a ten minute long slow-motion duel featuring his wife, Milla Jovovich, and Ali Larter fighting a giant monster with a hammer and a bag over his head, in a shower of 3D water raining down from a pipe (don't worry about who this guy is, we're never told). It ends with Jovovich blowing his head off with her sawed off shotgun, which for some reason shoots rolls of quarters as ammunition. It's a transcendent moment of high-camp action trash that I could write a thesis on.

What's even more ridiculous than reading that description, is the fact that "Afterlife" went on to become the highest grossing film in the "Resident Evil" series, by a significant margin. It guaranteed a return to theaters for Anderson and co., and that he'd have at least one more chance to have this series make any sense at all. Shockingly, he's almost done it with "Retribution".

After being captured at the end of the last film, Alice (Milla Jovovich) wakes up in an Umbrella facility, held captive by former friend and current Umbrella operative Jill Valentine. When she's broken out by Umbrella operative turned traitor, agent Ada Wong (a character brought in from the game universe) she soon learns that her old nemesis, Wesker, now wants to recruit her to help him save mankind from the Red Queen, the rogue AI from the first "Resident Evil" film. This was apparently his motive all along, but don't spend too much time pondering why he didn't just say that during the last film, instead of spending an hour and a half trying to murder her and her friends.

Although Anderson does make an attempt to bring the story around full circle, what really matters here is the action. The glorious, ridiculous, three dimensional zombie killing action. Although it's been the draw of every film in the series, something odd has happened along the way. With "Resident Evil: Retribution", Anderson has crafted a good, nay, fantastic action/horror hybrid. I can't even believe I'm saying this unironically, but "Retribution" might be one of the best action/horror films in years.

He does this by keeping exposition light and brisk, and parsing it up sparingly throughout the film. Instead of spending lots of time talking like in "Afterlife", the characters are ushered to the next action set-piece at breakneck speeds. This is facilitated by the plot, which has Alice stuck in a state of the art Umbrella bio-terror testing facility, with interconnected biodomes resembling real cities around the world. London, Tokyo, New York City… you see our agents kill zombies in every one in "Retribution", and it's fantastic. This is due mainly to what seems like a vastly increased budget this time around, presumably because of te success of the last film. Anderson himself has really matured as an action director, and the result is almost pure adrenaline from start to finish. In addition to the usual machine gun antics, there's increased use of kung-fu this time around as well, which gives Anderson even more chances to show us what his wife looks like in slow motion. Spoiler alert... she looks pretty good.

Where it stumbles, as with every "Resident Evil", is when they get away from the film's strengths (things exploding), and try to expand the overarching plot. For the last three films we've almost exclusively focused on small encounters Alice has with Umbrella, ignoring the larger implications of what is actually happening in the world around her. It's been a baffling and disorienting element to this series' storyline, one that at this point, to be frank, is a complete mess. While we're still caught in that trap with "Retribution", by the time it comes barreling home to the conclusion like an overgrown kid after eating too much sugar, Anderson has actually managed to bring almost every standing plot hole to a close, and set up one final battle to save humanity. He even makes an attempt, however futile, at giving Alice some character development. I guess after five films, someone realized that might be a good idea.

Now, make no mistake about it, "Resident Evil: Retribution" is dumb in the purest sense of the word. It's an aggressively silly movie in an aggressively silly franchise. But Anderson knows what he's making, and what's really scary is that with each candy-coated film in this series, he's getting better at it. For maybe the first time in five films, I left the theater without an ironic quip to make about the movie I had just seen. "Retribution" is fun as hell, like eating deep fried junk food at a state fair. You know it's destroying your body, but that doesn't change the fact that while it's in your mouth, every pleasure synapse in your brain is firing off like the fourth of July. So what if it brings us one step closer to "Idiocracy". For these films? That's a tradeoff I'm willing to make.