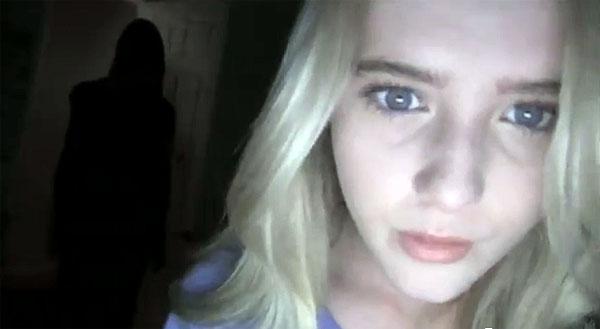 It's hard to believe there have been four "Paranormal Activity" films. Even in the year 2012, where sequels and spinoffs are commonplace, it's still unlikely that the series has made it this far. What's even more unlikely? The fact that, at least up until now, the series has maintained and even raised the bar for quality with each entry. Unfortunately, with "Paranormal Activity 4" you can throw that trend out the window.

After two films dealing with the same events in 2006 and one film that flashed back to the 80's, we've now arrived in the present day (or, 2011 at least). Our main character is a young girl named Alex, who lives at home with her parents and little brother. An annoying boyfriend is also in the mix, and some creepy neighbors who we soon discover are Katie and presumably, her sister's child that she stole at the end of the last film.

We stay mostly in Alex's point of view, as she video chats with her boyfriend and films her family doing any number of incredibly boring things. When the little boy next door's mother (Katie) gets "sick" and has to go to the hospital, the family agrees to take care of her creepy little kid Robbie for a few days. As Alex begins to realize how strange Robbie is, and the spooky occurrences increase, she and her boyfriend rig the house with a number of cameras (and webcams) to record the goings on so they can figure out exactly what's happening.

The original "Paranormal Activity" was a bit of a fluke. In the least, it was a film ingeniously marketed to its audience in a way that created an artificial demand the likes of which the genre has scarcely seen. Both the second and the third films seemed slightly more ambitious and willing to justify their existence by pushing the "found footage" genre as far as they could take it. They used creative camera tricks and inventive story justifications for the filming to try and elevate what they were doing beyond mere cash-in sequel, despite the fact that that's clearly what they were. Although both were low budget and "cheap", neither felt that way. In that sense, "Paranormal Activity 4" is the first film in the series that feels exceedingly cynical.

There are clearly no wells left to tap when it comes to inspiration for this story. Instead of expanding the mythos in an interesting way as in the previous two sequels, this one is merely content to rehash events of the past films, leaving us only with one large, vague conspiracy at the end to justify its plot (and presumably, endless sequels). Scare wise, we're also digging the bottom of the barrel here. Remember at the end of the first film, when Katie was crawling towards the camera and suddenly gets pulled away really fast? Based on most of "Paranormal Activity 4", it's about all they have left. More people are swept off their feet or thrown into the camera in this film than I can even count. One can only hope that someone's currently making a supercut of all that nonsense right now, because it might just end up being the funniest video ever made. When an XBOX Kinect is your secret weapon to create scares, something has gone horribly, horribly wrong.

There isn't a lot else to say, really. Unless the point of "Paranormal Activity 4" was to make me feel uncomfortable with the way they sexualized a 13 year old girl, then this film fails on every level imaginable. About the only character I could even remotely identify with was the father, who spends almost the entire run time laying on the couch, drinking and watching TV. More envious of a character in a film, I have never been... It's hard to be mad though, considering I've willingly given them my money for four years in a row now. Let me be the first to say, I'm done. More importantly, the "Paranormal Activity" series is done. Stick a fork in it. Now, can we get more "Saw" movies? They can't be worse than this...