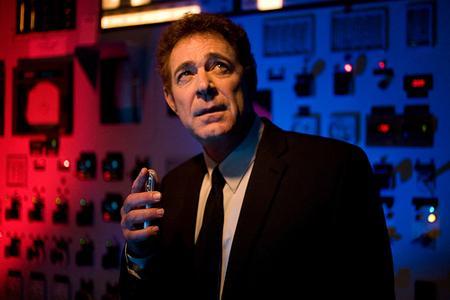 If hypocrisy is a federal offense, then I'm Charles Manson. The evidence is crystal clear: While one hand savagely smacks the uninspired, low-budget, independently-financed horror movie without a hint of mercy, the other lovingly welcomes the shamelessly opportunistic cinematic ventures produced by the weirdos at The Asylum. Recently, the company has left its greasy fingerprints on the unsuspecting backside of the movie industry, releasing its so-called "mockbusters" -- cheap, half-hearted imitations of Hollywood event films -- to an audience that, for the most part, seems indifferent of their existence. To be perfectly honest, I don't know anyone else who watches these movies, though I'm strangely okay with that.

Those who wish to bravely dip their flat feet into these dangerous waters should begin their adventure with Eric Forsberg's 2010 laugh riot "Mega Piranha", a deliriously poor yet oddly enjoyable action/horror hybrid that proudly wears its campy performances, its shoddy special effects, and its complete disdain for quality on its metaphorical sleeve like a tarnished badge of honor salvaged from an old box of Cracker Jacks. As inherently awful as the picture may be, I found myself inexplicably drawn to it, as if the film itself were equipped with some sort of interstellar tractor beam designed to ensnare snooty film critics who spend way too much time staring blankly at overpriced flat panel television screens.

"Mega Piranha" chronicles the South American adventures of Jason Fitch (professional B-movie hero Paul Logan), a highly-trained Special Forces operative who's sent to investigate the mysterious circumstances surrounding the untimely deaths of a sleazy US Ambassador and a shady Venezuelan diplomat, much to the dismay of the local government. His journeys eventually lead him to melodramatic biologist Sarah Monroe (Tiffany), who firmly believes that the murders were committed by hordes of genetically-altered piranha with a bit of an attitude problem. Before you know say Gorton's Fisherman, these impossibly gigantic carnivorous fish are ready and willing to take a bite out of the world at-large. Fitch, of course, is the only one who can stop this aquatic menace.

Although it may not appear that way on the surface, the boys and girls at The Asylum know precisely what they're doing. The goofy effects, the silly set pieces, the horrendous dialogue -- the whole bloody affair is designed specifically to appeal to those who shamelessly enjoy cheap B-movies and podunk creature features. It's painfully obvious that nobody on-board this rickety cinematic ship is taking anything very seriously; Paul Logan, whose beachfront encounter with a squadron of flying piranha is both intensely hilarious and strangely embarrassing, is a damn good sport, especially since he's the one saddled with most of the action. It's all in good fun, which makes the vast majority of the picture's inherent flaws easily forgivable.

As alluring and seductive as overgrown piranhas with a hunger for human flesh may be, it was actually the appearance of 80's pop singer Tiffany and "The Brady Bunch" alumni Barry Williams that cemented my interest in the picture. It's not everyday that a motion picture is packed with this much kitschy star power, in particular those unleashed by The Asylum. Williams almost seems to relish his role as Bob Grady (get it?), and, truth be told, his performance isn't half bad. Tiffany, on the other hand, frequently looks lost and embarrassed, as if this production were forced upon her by an agent who's literally scraping the bottom of the barrel to find the poor girl legitimate work. echoua.com

Although The Asylum has other contenders on the docket for later this year, I think it's safe to say that "Mega Piranha" is the high water mark for this bizarre little production company. None of their other releases seem to have the same self-awareness as director Eric Forsberg's wonky adventure, "Titanic 2" notwithstanding. And as much as I hate to admit it, my unwavering adoration for this silly endeavor cements my position as Bloody Good Horror's biggest hypocrite. Be that as it may, "Mega Piranha" will definitely rock your cinematic socks off, even if you intentionally warped motion pictures aren't necessarily your thing. As bad as it is, I can't say that I wasn't thoroughly entertained.