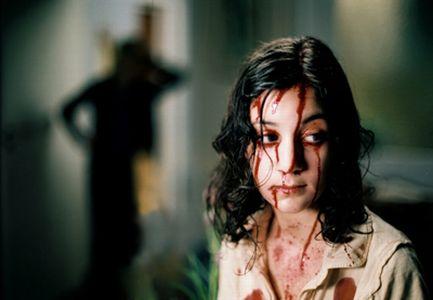 Let The Right One In (Movie Review)

If zombies are the monster of choice for making political points, vampires are the go-to creature when a a filmmaker has an emotional axe to grind. Obsession, desire, vanity and lust are emotional states that have been done to death in bloodsucker movies but Swedish film "Let the Right One In" takes the horror elements of vampire lore and injects them into a coming-of-age period drama to make a strange and beautiful film about loneliness, friendship and the difficulties of growing up.

Set in a snowy Swedish village in the early 1980s, the film follows Oskar, a lonely and angry 12 year-old dealing with bullies at school and a distant, alcoholic father at home. He forms a tentative friendship with Eli, the girl who has just moved in next door, who sometimes smells funny and doesn't seem to mind walking around in the snow in barefeet and thin pajamas. Eli is also 12, although by her own admission she's been 12 “for a long time”. She is, of course, a vampire and she shares her apartment with an old man who kills victims for her, draining their blood to feed her and keep her alive.

The budding friendship between Eli and Oskar is the crux of the movie and it's a testament to the film's strength that it manages to be heartwarming to watch these two lonely children find someone to relate to while at the same time never letting us shake the feeling that this can't possibly end well and that in bringing Oskar into her life, Eli is dragging him into the darkness. The acting from the two children is top-notch and it is a relief that the film avoided the now-clichéd portrayal of a child vampire as an adult trapped in a never-aging body (a/k/a the Dunst effect). In contrast, Eli acts just as indecisive and mopey as most 12 year-olds, the only difference being that she actually has a legitimate reason to be sad and world-weary.

The bleak, snow-covered landscape of suburban Sweden adds to the film's cold and lonely feeling with most shots being overwhelmingly white and blank with a few muted browns and blues. Even the adults of the town aren't immune to the ennui and they don't seem to have much more to do beside drink and watch television. The sterile and mundane atmosphere created by the setting make the more conventional horror scenes stand out as even more shocking and grotesque. In particular, the violent final scene is beautifully shot and staged and plays with the audience's emotions as we cheer on a punishment that probably exceeds the crime.

The film is not without its flaws. There is one scene in particular involving a cat attack that uses both bad CG and a (presumably) unintentional slapstick vibe that is jarringly out of place. There are also some ambiguous elements that were taken from the novel the screenplay was based on that allude to Eli's pre-vampiric past which is never fully or even partially explained and could serve to confuse and alienate some viewers. Even with these minor missteps the film transcends any boundaries placed upon it by the genre. "Let the Right One In" deserves to be recognized not just as a great vampire film, or as a great horror film, but as a great film, no matter the genre.