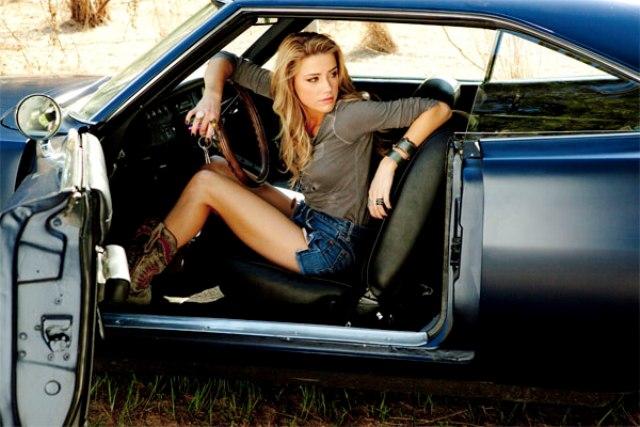 At this point in his career Nicolas Cage has fallen into the same category at Tom Cruise. There's no doubt he's got talent, movies like "Leaving Las Vegas" are proof enough of that. But at some point he took a hard left and now it's almost impossible to take him seriously. "Drive Angry" is a throw back to the late 80's and early 90's action movies a lot of us grew up watching and if it had been made back then it probably would have been taken a lot more seriously, or at the very least, we'd still be in a Pre-"The Wicker Man" Nic Cage world.

The movie doesn't waste any time setting the tone. Milton, played by Cage is on a hunt to find the leader of a Satanic cult that murdered his daughter and is now holding his granddaughter in a plot to sacrifice her to their Dark Overlord. He quickly picks up a waitress named Piper, played by Amber Heard, who's leaving behind her crappy job and cheating boyfriend. Oh and she's got the sex drive of a 17 year old boy who accidentally downed half a bottle of Viagra to boot. The two set out on a cross country trip to find Milton's granddaughter and along the way kill and screw just about anyone they come in contact with. In one glorious scene Milton does both of those things at the same time while guzzling a bottle of Jack.

The film has a certain vibe too it that you haven't seen a lot recently. You'll find a lot more in common with a movie like "Road House", which was made more then 20 years ago, then to any of the action flicks you see in theaters these days. That's not a bad thing either. For fans of these types of movies you're going to feel right at home. For those of you looking for a new twist there's enough supernatural action thrown in to make you happy without getting so over the top that you get lost. William Fichtner for instance plays The Accountant, who's on his own hunt to track down Milton and is sent by the Devil himself to do the job. His character is the highlight of the film and Fichtner's dead-pan delivery fits the role perfectly.

On the other hand though the charter of Jonah King, the cult leader played by Billy Burke if a little too loose to be believable. It isn't until close to the end of the movie that things really take off with them and you start to feel like they really do worship the devil. Not that I expected them to be running around with pitchforks the entire time but for the majority of the movie they seemed more like a crappy biker gang who lost their Harleys than baby sacrificers.

Cage is as dry as ever and while he doesn't appear to be phoning it in the "man of few words" act becomes a little hard to swallow when he's delivering lines like "I never disrobe before a gunfight". It's tolerable though and at the end of the day it's not enough to take away from the solid performances from his travel mate Heard, who in a twist on the "woman in trouble" role actually hands out just as much ass kicking as Cage does in this. It's a nice change and the two characters play off each other enough to keep things fun. Oh and not to give too much away but the two never end up "together" which I appreciated after expecting the filmmakers to somehow find a way to get the Cage, who's eying 60, and the just-past-20 Heard in the same bed.

It would be wrong to write a review for the film without mentioning the 3D. While it's never distracting and is fairly well done I should also say at no point did I think it added much to the movie. With the exception of a few of the more action-filled scenes I can honestly say I didn't even notice it for most of the film. At no point did I feel like it was being used as a cheap way to tag on a couple more dollars to a ticket price though so all and all I'd say you could take it or leave it. Waiting to see the movie on DVD or Blu-Ray isn't really going to take away from the experience.

If you're going to go into "Drive Angry" expecting a ridiculous over the top ride then you're going to be completely satisfied, pun intended. But the movie is by no means for everyone. When I was in High School I use to work at a video store and be amazed by these husbands that would come in and rent every movie Jean-Claude Van Damme and Steven Seagal made. "Drive Angry" is made for those guys and anyone who doesn't think they're completely insane. For everyone else though you're not going to be pleasantly surprised so it's best to leave this one to viewings in the morning before the rest of the family wakes up, or in the basement away from the rest of the sane adults.