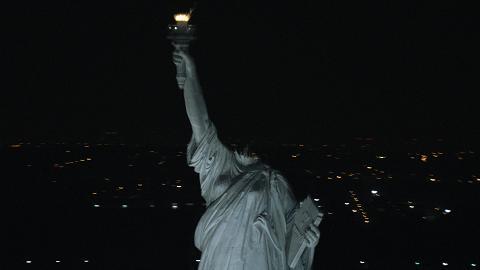 As I finally sat myself down to watch J.J. Abrams Cloverfield last night, one prevailing thought kept popping up. "No Way," I thought to myself. No way this film could possibly live up to the hype I had built up in my head over the last year. Sure, there had been early positive reviews that were promising (I hadn't read them, I never do) but still, I just wasn't convinced.

The film opens with a handheld camera shot (naturally) of a guy and a girl - Rob and Beth - obviously the morning after some particularly sweaty coitus. As they share a tender moment in bed together, it becomes clear that these are our leads, the characters we are meant to connect with throughout this experience. Then, the camera quickly jumps and according to the date on the on-screen display, it's about a month later.

Rob is moving to Japan, and unbeknownst to him, his friends are all gathering in a swanky uptown apartment to send him off in style. The other main players consist of his brother Jason, his best friend Hud, future sister-in law Jessica, and Marlena, who is merely stopping by the party to say hello to a friend. Before the mayhem begins, we learn that Jason and Beth have been estranged since their earlier romantic encounter. Apparently the two have always been friends, and Jason had been reluctant about starting anything up with Beth since he is moving thousands of miles away. Since Rob never called her back, she has apparently moved on and began dating someone else. After the two have an argument in the hallway, Beth and her newfound boyfriend storm out of the party.

It's at this point that Rob, his brother, and his goofy-yet-lovable best friend Hud (who has been relegated to awkward camera duty by Jason) move out on to the roof to talk things over. Their party will be cut short momentarily, when an unbelievable explosion rocks down-town Manhattan. The ensuing fireballs almost knock the camera out, and the trio run back into the apartment to see what is going on.

It is from this point out that J.J. Abrams "Cloverfield" really begins to sizzle, and it rarely lets up for the entire duration. In a panicked jumble, the party-goers try and stumble down the stairs to get out on to the street. This evacuation would foreshadow the chaos that would reign supreme for the rest of the film. If you're ever in a situation like this, expect everyone to freak out just as hardcore as they are here. In this world, "single file" is a word not readily understood.

Running out on to the street, the group gets the shock of a lifetime as the severed head of the Statue of Liberty tumbles towards them, landing merely 20 feet away. Immediately after, a building in their field of view collapses, and in a scene eerily reminiscent of the events of 9/11 (no doubt intentionally so) the group has to run into a nearby store to escape a towering cloud of ash and debris.

I hesitate to synopsize any farther, but let's just say this, when we finally get a look at the thing terrorizing New York City, it does not disappoint. Lovecraftian in it's inspiration, it looks like nothing I've ever seen. Large and Reptilian for sure, it differs from a "Godzilla" like design in that it has long, almost spider-like legs. The CGI, for the most part, was pretty spectacular. A feat pulled off mainly with camera trickery, lighting, and good old fashioned attention to detail. Also, the "parasites" as they're being called are a stroke of genius, allowing the filmmakers to keep tension ratcheted up even when our leads are surely safe from the larger predator. To impress me with an entirely computer generated monster attacking New York City, well let's just say that's a feat not easily obtained.

Really though, the visuals are not the important thing here. If "Cloverfield" is not at least nominated for some type of award for Sound Design, we might as well dissolve all of the Award giving bodies, because surely they know nothing about truly effective cinema. The sounds of missiles or bullets flying overhead are visceral, cutting right to the viewers bone. Loud stomping, monstrous screams, flesh ripping asunder and metal bending are the things that stick out in my head the most. And because so much happens off-screen (due to the shaky cam effect), the sound takes center stage.

They even manage to inject Action Movie-worthy set pieces, like the trek into the leaning apartment building towards the end, that almost make the viewer forget they are watching a handheld movie. That scene in particular was reminiscent of a film like "The Descent," in that it managed to be incredibly intense while not in any way involving the film's "Monster." These moments were important for the film to really hold up, because it would have been impossible to keep the excitement of those monster moments up for an entire movie. Having likable characters and putting them in intense situations that were not monster related, helped it feel more like a full fledged movie, rather than a series of uninteresting experiences wrapped around attack scenes.

People are gonna want to know...
how it all went down.

If I had one complaint, it may be the insistence of Hollywood over the last 10 years of casting impossibly good looking people for their movies. In a film where realism rules the day, it would have been nice to have people more resembling you and I occupying these characters. That, and, although it's not entirely a complaint, I could have done without all of the comic relief coming from our camera man, Hud. I understand that some people deal with traumatic situations that way (I'm probably one of them), but his insistence on cracking jokes during the most intense of times had a tendency of removing me from my fear, which I have to say I was particularly enjoying.

That said, mainstream audiences will no doubt (based on the reactions of a few goons at my screening) be perplexed by the film. Horror fans, for their part, may take issue with the love story. Although to those parties I would ask the question, are you human? Some times as horror fans we become so dark and thirsty for horror, that we forget it's these human elements that cement our fear and tension in the end. And although it does end on a somewhat romantic/tragic note, for me the film had earned that by kicking my ass for over an hour and a half before that. Also, it must be said that Abrams insistence on playing with the old Hollywood cliche of "morning = safety," was just one more reason why I truly loved the film. It takes those monster movie cliches and turns them on their head, while simultaneously beating most every other monster film at it's own game.

When the final reel rolled out on J.J. Abrams Cloverfield, I left the theater with a renewed sense of wonderment for the potential of not only horror cinema, but cinema in general. I found myself giddy and awestruck, and that for me says more than any analysis I can lay out here. I laughed, I cried, I shuttered in fear and excitement. And when it was all said and done, Abrams and crew actually managed to do the impossible... they beat my sky-high expectations. Cloverfield has easily cemented itself a spot in my Top 10 Horror movies; A bold statement that I will gladly back up should the need arise.